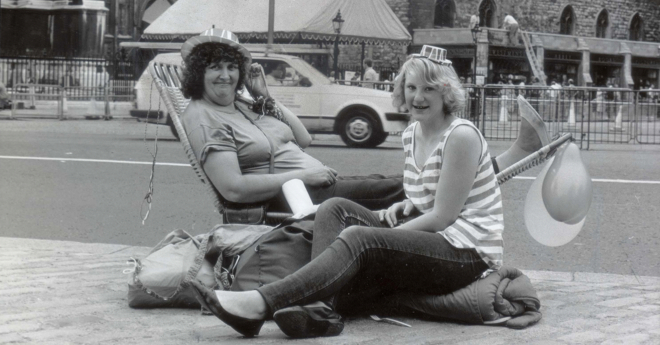 This time it’s back to 1986 and yet another doomed union. Yes, who’d have thought that within the space of a year, Frank Bough and Selina Scott had gone their separate ways and would never appear together on screen again.

At least they managed longer than Andy and Fergie, who’d stopped talking within the week.

The BBC unfurls the banners with the impressive sounding THE ROYAL WEDDING: LONDON PREPARES the night before, with all the usuals – Frank, Selina, Glyn Worsnip plus Mike Smith and Sally Magnusson – present and correct. Andrew Gardner’s back yet again for ITV, but this time with just a 15 minute round-up of “news”, and even that has to be shared with a peaky-looking Sarah Kennedy before…

Oh yes. Titled A ROYAL ROMANCE on ITV, it’s Andrew G’s second stab at playing relay with his BBC rival, who this time comes in the shape of Sue Lawley. The Beeb show it at exactly the same time, 7pm, but call it THE ROYAL WEDDING: ANDREW AND SARAH just in case you’d forgotten.

Thanks to the coming of breakfast television, BBC1 now has no qualms about opening up at the bleary hour of 6.15am and running uninterrupted with their simply-titled THE ROYAL WEDDING all the way through to 1.30pm. Then it’s NEWS AFTER NOON, the film LIVING FREE and, at 3.30pm, THE ROYAL WEDDING: HONEYMOON DEPARTURE. ITV conspire to wake up at precisely the same time, but with a TV-am: ROYAL WEDDING SPECIAL. At 9.25am the switch is thrown and the whole network judders into THE ROYAL WEDDING until 1.30pm. After the news and HERBIE RIDES AGAIN it’s the boringly-titled HONEYMOON DEPARTURE at 4pm, followed by another GIVE US A CLUE SPECIAL, which is at least a step up from last time round by also being the show’s 150th edition. 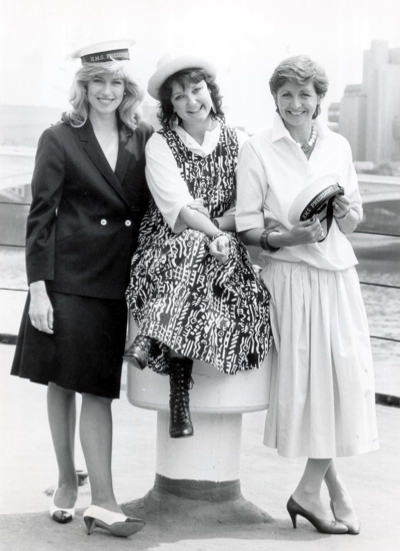 It’s the Beeb’s best ever showing: Frank, Selina, David Dimbleby, Valerie Singleton, John Stapleton, Mike Smith and Sally Magnusson, plus – no doubt getting in the mood via some festive apparel – Francis Wilson, Sue Carpenter and Bob Wilson. By contrast ITV roll out, yet again, Andrew, Alastair, Ronald and Sarah Kennedy, though the presence of TV-am mean Anne Diamond, Nick Owen, Gyles Brandreth and Gordon Honeycombe are also in on the act.

BBC2 can’t be arsed, flinging out PLAY SCHOOL at 10.30am, Asian magazine GHARBAR at 10.50, THE PHYSICS OF MATTER at 1.35pm, CHOCK-A-BLOCK at 2pm and that’s it. Channel 4 don’t even show up until 2.15pm, and that’s with THEIR LORDSHIPS’ HOUSE and a typically arch bit of scheduling from Jeremy Isaacs, the film QUIET WEDDING.

The Beeb’s offering of fashion editor Sophie Hicks is utterly trumped by the folk at TV-am who have already spent the best part of the last year talking about Sarah’s dress and the whole of the past three years talking about the Royals. Despite the presence of Vogue fashion editor Drusilla Beyfus, Anne and Nick are in their element, chattering about Sarah’s outfit, the outfit of all the visiting dignitaries, and the outfit of Gyles Brandreth.

Nigel Dempster gives us a “chance to meet the alternative Sarah and Andrew” by revealing the winner of the TV-am Royal Lookalike Competition; Godfrey Talbot recalls the first wedding he ever attended 190 years ago.

None whatsoever. Neither bride nor groom being that way inclined, there’s a distinct absence of pony palaver. Martyn Lewis is hanging with the Household Cavalry, though.

is the complete population of the Falkland Islands, including “Prince Andrew’s many friends”, brought to order by a breezy Guy Michelmore.

Sarah’s village of Dummer in Hampshire boasts the celebrated presence of Valerie Singleton *and* John Stapleton, who are on the beat throughout the day and pop up in a special slot expertly titled ‘Dummer Delighted’. ITN’s Anne Leuchars does the same job for the other side.

John Mountford is aboard Andrew’s sometimes stamping ground HMS Brazen. The Prince’s former commanding officer in the Falklands, the spectacularly named Ralph Wyes-Sneyd, has – of course – been snaffled by TV-am.

Given Mike Smith is wielding the stick mike in The Mall, there are invariably many dozens of them, but all are instantly forgettable. Conveniently for us.

Alastair Stewart is back in the Goodyear blimp. Frank introduces ‘The Abbey Awakes’, a behind the scenes peek at the life of the eponymous establishment’s one vacuum cleaner.

3/10. There’s no Tom for a start, his place usurped by David Dimbleby. There’s also a conscious limit on the all-round swagger and bluster, instead majoring on the cheap (the entire TV-am output) and the cheerful (Frank and co). Plus the presence of Sarah Kennedy means there’s loads of indiscreet gossiping, which is just downright irritating. But above all, where’s Wogan? His usual show will turn up later at 7pm, but they surely missed a trick not having him exchanging banter with wedding guests on a raised plinth in Trafalgar Square.