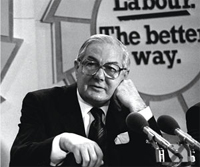 BBC Parliament has spent the evening reliving events from precisely 30 years ago, when Donald MacCormick stood on a gantry high up in the rain outside Westminster and announced the end of Jim Callaghan’s government.

Callaghan is most definitely a TV Cream Politician. Criteria for entry into this category, one that is never very far from threatening to become important, is, inconveniently for this blog at this precise moment in time, hard to put into words.

It’s easier to use comparison. While Sunny Jim and Sailor Ted, for instance, are most definitely TV Cream Prime Ministers, Harold Wilson and Margaret Thatcher are not. The latter two both lurched large in the public domain and tried to cast much of the country in their own image, but neither won universal respect and/or pity.

Both divided the country down the middle. Jim and Ted did not. They united it – not necessarily in admiration (if ever), but in a more everyday, workmanlike fashion, in their stubbornness, or fallibility, or simply by dint of being human. And it’s in this sense that, while John Major is a TV Cream Prime Minister, Tony Blair is not.

It’s something to do with being ordinary people in extraordinary situations. Most of what TV Cream is about concerns everyday things being turned into the ultra-special and the uber-memorable, usually by TV, radio, music and print. So a TV Cream Politician is somebody who is thunderously ordinary and who leaves their mark on our lives through not being particularly special but having special things done to them.

This is all getting a bit convoluted, so how about a reassuring list to sort things out.

The following are all TV Cream Politicians:

Denis Healey
For the Nationwide panto.

Leon Brittan
For being ugly when ugliness was against the law (1983-5).

Bryan Gould
For being everywhere on TV then suddenly being nowhere.

Chris Patten
For forgetting to win his own election.

David Steel
For running a political party from a constituency in the middle of nowhere, making for much pitch black/reporters-standing-in-fields coverage on results night.

The following are most definitely not TV Cream Politicians:

Norman Tebbit
For becoming his own stereotype.

Shirley Williams
For being called ‘a lovely gal’ by Norman St John Stevas in 1979. And for the fact that, while it’s good that much of what she says is right, it’s not good the way she revels it.

David Owen
For breaking up too many parties.

Edwina Currie
For substituting one vulgar cultural motif – poisonous eggs – for another – sex with John Major.

Roy Hattersley
For being the last ever Secretary of State for Prices and not doing anything about prices.

Margaret Beckett
For telling Jim Naughtie to “pack it in” on the Today programme.