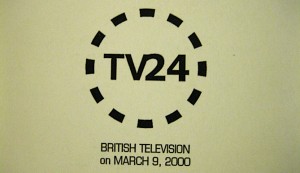 Exactly 10 years ago, TV Cream’s erstwhile sister site Off The Telly embarked on something it decided to call TV24.

Five people would each watch one of the five terrestrial TV channels for 24 hours, and write about what they saw.

It was one of those projects typical of the giddy, naive days in the early life of a new website.

And that’s not a cheap shot at people who can no longer answer back because the person who dreamed up the demented project is writing these very words.

All the articles from TV24 are still online for your perusal, including the stuff by that bloke nobody likes anymore.

If, however, you can’t be bothered with all that, and are merely curious as to what those five people put themselves through on 9th March 2000, let’s cast a brief, leaden eye over the schedules from 10 years ago and see just how the crystal bucket has changed, to coin a Melyvn, in our time.

To do a like-for-like comparison, we better pick the same day of the week. 9th March 2000 was a Thursday, so let’s dip into the line-up for this Thursday, 11th March 2010…

…and on BBC1 there’s not that much that feels different. Kilroy’s gone but the morning’s still a lifestylathon, with Shopping City and Real Rooms having given way to Homes Under the Hammer and Cash in the Attic. No quiz hour at 12pm, sadly, and there’s Doctors instead of the perfect blend just after the lunchtime news. Where we have Murder, She Wrote now, we had Quincy then. Rather neatly, CBBC begins at exactly the same time this year as it did in 2000: 3.25pm, although it wraps up earlier (Grange Hill was on at 5.10 in 2000). The evening line-up in 2000 went Watchdog, EastEnders, Holby City, the news, Playing The Field, It’s Only TV But I Like It and Question Time. Half of them have survived. As has the Sign Zone, or For Deaf Viewers as it was called in 2000.

Swap Jeremy Kyle for Trisha and ITV would be identical in both years through to lunchtime, up to and including The Worst Programme On Television. Back in 2000 CITV still existed, but on a diet of such thin gruel as Hey Arnold and Children’s Ward it was clearly not long for this world. The evening unspooled from Emmerdale through The Motor Show (primetime autophilia on the light channel!) and The Bill to Steve Penk’s TV Nightmares, an hour of Tonight and the news at 11pm. Most of that’s still there today, just in a different order and spiced with Coronation Street. Nighttime was shite then and is still shite now.

Highlight of BBC2‘s daytime (output that one former Secretary of State wants to abolish) in 2000 was Westminster Live. Lowlight of BBC2’s daytime in 2010 is The Daily Politics. There’s nature stuff at lunchtime in both years, but where Esther held court in 2000 we’ve now got some much needed quizzes. 6pm on BBC2 in 2000 still meant youth programming, not Antiques Road Trip and The Culture Show. Look, there’s Top Gear, half an hour long on a weeknight. And Troubleshooter, and Horizon – a decent line-up. This year? Kate Humble feeling a lamb’s uterus.

Channel 4 still had the Big Breakfast in 2000, chiefly because nobody could think up anything to put in its place. It’s gone now, but they still haven’t thought of anything. A slew of schools’ stuff, Powerhouse and Why Weight? filled up the morning before, as now, an old film. Ricki Lake and Pet Rescue at teatime: a score draw with Coach Trip and Come Dine with Me Extra Portions. Hollyoaks is still there at 6.30pm, ditto the news at 7pm. The evening, though, is very different: loads of pontificating in 2000, a ton of net curtain-twitchery in 2010, though no The 11 O’clock Show: The News Alternative (to give it its full title) and no 4 Later either.

In short: some truly awful programmes have disappeared, but a fair few mediocre ones have taken their place. Which is more offensive: something that tries and fails, or something that doesn’t even try?

Anyway here, in the words of Richard Dimbleby, are the full figures: 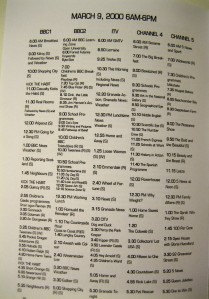 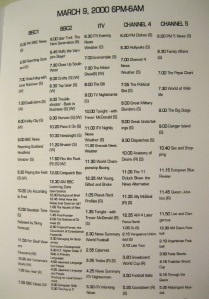