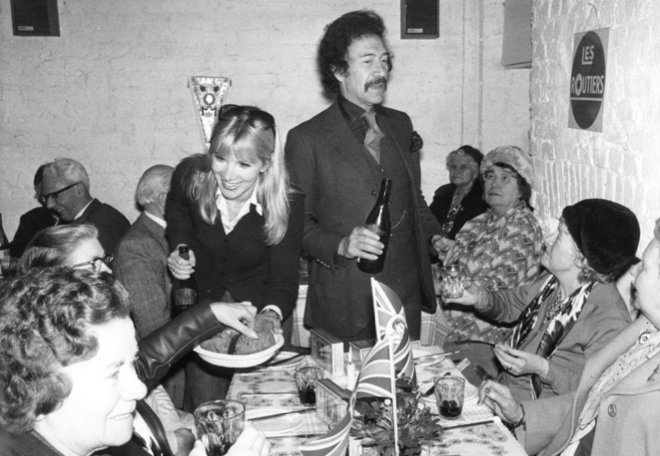 Susan Hampshire and Peter Wyngarde treat pensioners to a slap-up silver jubilee meal at Annabelle’s Cafe in Fulham Road – what’s not to like?

Well, you didn’t think this was going to take a day off, did you? Then a blank screen from 7.55 until…

Printed in the tiniest typeface possible in the Radio Times, back in the days when every big occasion had to be preceded by cartoons while BBC1 cleared its throat. At least one paper will have referred to this as “breakfast television.”

“Raising the curtain on jubilee day”, says the RT, but it neglects to mention what they actually did or who did it. Tch.

10.10 Silver Jubilee: a Day of Celebration

Tom Fleming dons his cravat and settles down for the main shift. Each moment on the day was timed to the second and noted down in the RT. They all left the Palace at 10.25 and were driven around London for an hour, with a quick excursion at 11.10 for the Queen to touch the hilt of the Pearl Sword offered by the Lord Mayor. Then they were all in their seats in time for… 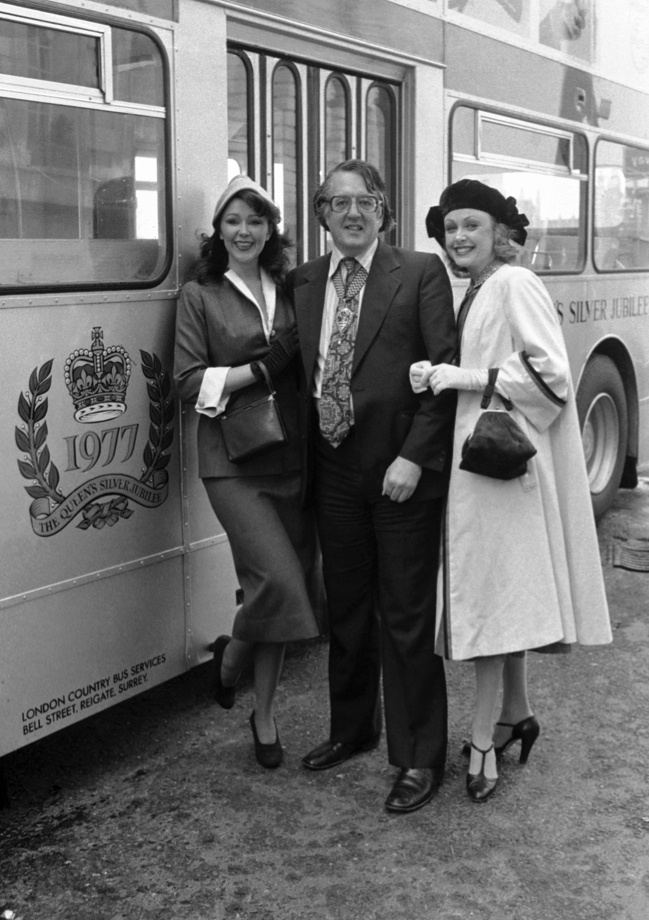 GLC Chairman Lord Ponsonby is flanked by models Lina Hooks, left, and Jan Emery – both dressed in the attire of 1952 – as he introduces the first of 50 silver buses celebrating the silver jubilee

11.30 A Service of Thanksgiving

A load of hymns from St. Paul’s Cathedral.

12.25pm The Queen Meets the People

As she walked through London on her way to a luncheon at the Guildhall. But enough of that, because up next it’s…

While the Queen had her dinner, we had Michael Barratt and Frank Bough in shirt sleeves toasting the entire country, and Valerie Singleton on CakeWatch. This was an actual real fair in the studio, with a huge merry-go-round in the middle of the floor, and Mike linked into all the reports via – can you guess? – a Venetian-blind styled Jubilee Scanner. They were also joined by the winners of their Song For A Jubilee competition. “Ba-bumba-ba-bumba-ba-bumba! It’s the jubilee rhumba!”

2.25 The Queen Speaks to the Commonwealth

Via the Beeb, ITV and all radio stations except for Radio 3.

There wasn’t much to jubilee day, was there? After the lunch, there was another procession through London in a horse-drawn carriage, before the whole family appeared on the balcony of Buckingham Palace at 3.25. Then that was it until Thursday when the Queen and Prince Philip went up the Thames on a boat, a bit like Michael Jackson and those fake Olympic rings.

Time to switch over to the racing on ITV.

For shame, no Jubilee Blue Peter, or even John Craven’s Jubilee Newsround. Instead all you got was Penelope Keith reading a story by Helen Creswell about Posy Bates taking part in her school’s jubilee presentation.

A pre-moustachioed Richard Whitmore spends eight minutes talking about the jubilee, then two minutes on war and famine.

Basically, regional news everywhere except for London, who got Tom and Jerry. Well, it’s not as if anything happened there today, did it?

Hopefully Mike and Frank put suits on for this one because it was official Nationwide time. And because they’d been on so much today, tomorrow the programme was just 20 minutes long so they could cram in One Million Years BC starring Racquel Welch.

“Since today was all about celebrating a strong woman, here are some more,” was presumably the idea behind this scheduling. Pickering and Vine are in Cambridge as Britain’s top sportswomen – Rachel Heyhoe-Flint, Anne Packer and some others we’ve never heard of – battle it out for the Diet Pepsi Trophy.

“A special BBC1 holiday presentation” is the way they always explained away the lazy option of just bunging on a really long film to fill up the evening.

We always associate Richard Whitmore with being on before the See-Saw programme, so this late night placing is all wrong.

Textbook stuff, this line-up, isn’t it? Max Bygraves was top of the bill, and also appearing were Millicent Martin, Julia McKenzie, Sheila Staefel and, er, The Hot Dogs.

Not heard the national anthem enough today? Here it is again. 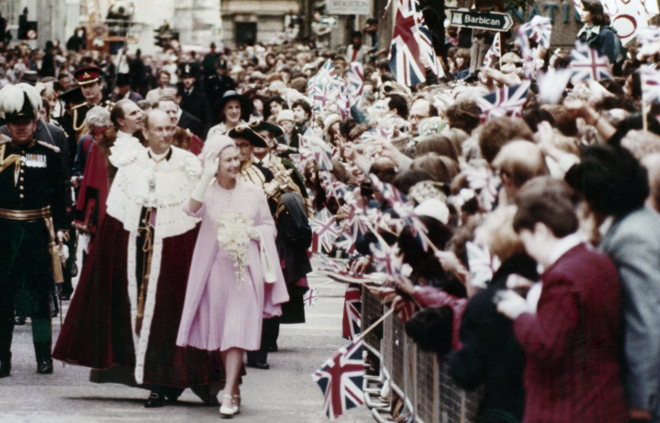 The Queen, yesterday – or indeed any day from the last 60 years

A quick burst of Walk The Talk until…

Julie Stevens and Brian Cant raise the flag for jubilee day and open up their Royal Scrapbook. No teatime repeat, alas. 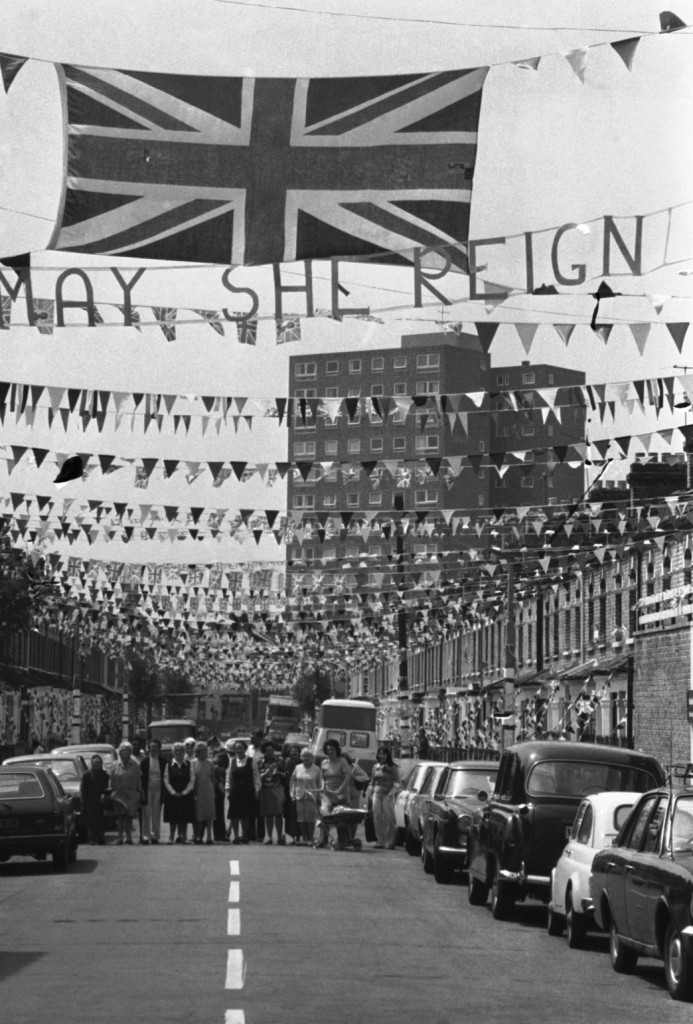 If this had been on an hour later, Michael Barratt would have been on two channels at once.

5.15 The Secret Life of Walter Mitty

They could easily have swapped it with this.

Followed by Weather on 2 – a more challenging, arty look at the weather, perhaps.

BBC2 made a day of it, didn’t they? Part nine of the series on learning Italian.

From the splendour of Caesar’s Palace in Luton (yes, really), Neville “This is not a stage name” King introduces a bunch of “top international magicians”, none of whom we’ve ever head of. Still “Los Magicos” is a great name, isn’t it?

Eric Clapton performs at the BBC Television Theatre. Our uncle has a video on his shelf called Eric Clapton on Whistle Test, and one day we’re going to ask him if we could watch it, just in case Bob Harris is at the start. And then we’ll immediately turn it off.

9.40 Silver Jubilee: a Day of Celebration

The minority channel oddly takes on the task of showing the highlights of the day. Given that this week’s Radio Times features a letter asking for consideration to be taken into account by the commentators for those still watching in black and white, it’s a shame those watching on 405 lines were left out once again.

10.40 Laurence Olivier in Love Among the Ruins

Back when you used to have seasons devoted to living actors.

Fall asleep to the soothing sounds of John Williams on the guitar. And from all of them at Television Centre, goodnight. 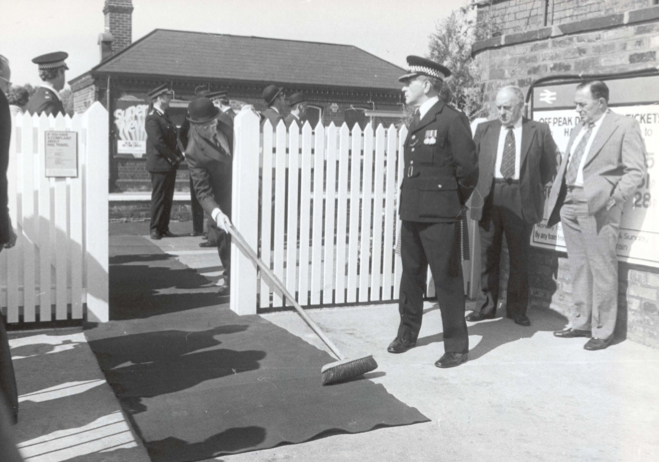 Back in the golden years when it was on every day.

A film of the Queen and Prince Philip getting married in 1947. Zzzzz.

Alistair Burnet had sorted through all his 365 crevats in preparation, but to no avail. An industrial dispute meant all ITV viewers got was a documentary about Coventry Cathedral, an unspecified film, plus any old rubbish they could find on the shelves. 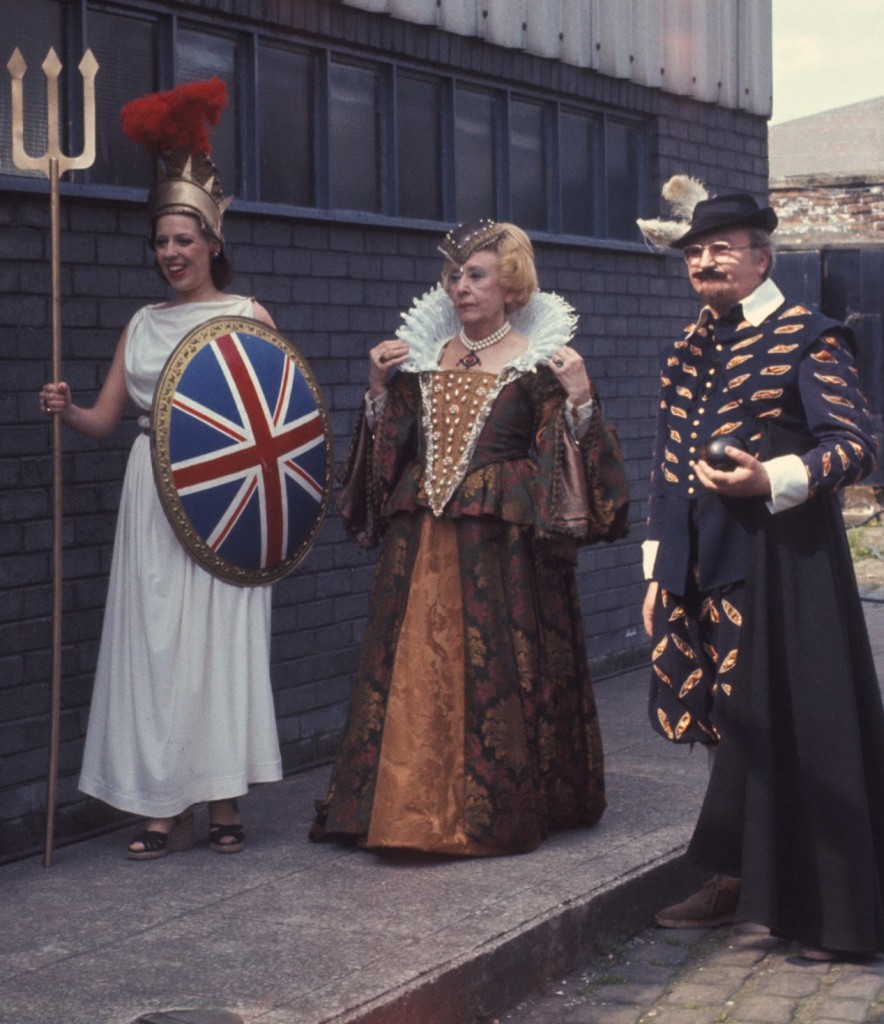 This seemed to go out, though, with Dickie Davies introducing an afternoon of “all-round sporting entertainment”. Basically this was Roses Cricket, with commentary by Gerald Sinstadt (and Granada and Yorkshire were still showing that as recently as 1991, even though they showed no other cricket at any time and they could only fit in an hour or so a day), and The ITV Seven from Sandown and Redcar. At 1.25 there was the mysteriously-named Sports Special, which appears to be just some wrestling, and Dickie also had to introduce the Queen’s Speech to the Commonwealth and the News at One.

You knew it was a big day when Alistair Burnet was on at teatime.

Some regions got Jubilee Mr and Mrs, but others, bizarrely, decided to show it the following day and tonight screened a bog standard episode of Sale of the Century. Perhaps they thought only Nicholas Parsons had the required gravitas for this special day. ATV had all the fun and excitement of, er, University Challenge, Anglia had Jubilee About Anglia, Southern had Jubilee Day by Day and Granada just flung on The Beverly Hillbillies.

But they weren’t holding their own jubilee party in the motel, which is just not on.

Not the crappy Saturday afternoon time-filler of clips from British films, instead a sort of proto-Video Entertainers – The Eight-Track Entertainers, maybe. All of them had appeared on New Faces, so we got Michael Barrymore, Jim Davidson and Roger De Courcey, but we also had Al Dean, Simone and the excitingly-named Monopoly.

Opposite the Beeb’s long film, a long film. But at least this was a Hitchcock.

Including highlights of the day’s events if they’d grabbed some pictures off the Beeb.

You wouldn’t get a recreation of how Elgar wrote the Enigma Variations on ITV now.

A vicar from your region sends you off to bed.