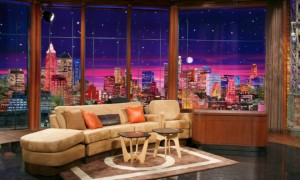 The almighty kerfuffle that’s been going on across the water over who should be on NBC at 11.30pm each weeknight might have passed you by.

That’s fine, and perhaps that’s how it should be; at one (hell of a) remove it’s akin to the small screen version of bald men fighting over a comb.

Nonetheless it’s the sort of thing that obsesses TV Cream, as it awakens our slumbering ire at the fact there still hasn’t been a successful equivalent to Johnny Carson and/or the Tonight Show on UK screens – both of which, preferably together, some of us can’t get enough of.

Many have tried. No, wait a minute – many haven’t tried, and that’s been the problem.

Johnny Vaughan Tonight took too much for granted: the format, the studio audience, the viewers at home. The Last Resort was funny but not topical. The Late Edition on BBC4 was topical but not funny. The 11 O’Clock Show was neither. The RDA had something of the right spirit, but was on at the wrong time and had the wrong calibre of guests. Graham Norton’s nightly Channel 4 effort had the right calibre of guests but was too niche and undignified.

And so on. There’s always been something missing, something the producers and presenters can’t quite nail or simply don’t bother striving for.

So who could do it? Who could be Britain’s version of Carson, or Letterman, or even newly-redundant multi-millionaire Conan O’Brien?

It would have to be somebody (in no particular order):
a) funny
b) intelligent
c) dignified
d) who exudes warmth
e) who looks at ease behind a desk

And they would have to get a show that was:
a) in the same slot every weeknight
b) had a decent budget
c) blessed with excellent guests
d) had a proper, i.e. not a comedy, house band

Shall we quit now? It seems a near-impossibly tall order. It might not have been so implausible, say, 20 years ago. Aspel would’ve been perfect at it; Clive James possibly, though he wouldn’t have had the warmth; Wogan might have looked discomfited behind a desk.

But today? Well, Jack Dee ticks a lot of boxes – funny, intelligent, dignified – but hasn’t exactly made a career out of being warm and affable. At least he has the same sort of background as Carson and Letterman: an entertainer. Plus he’s a mainstream figure: remember we’re after someone who’s already well-known and who’s not going to surprise anybody.

Stephen Fry has become too much of a caricature of himself to do the job, though he would’ve been great 10 years ago. Danny Baker? Probably still too prickly. Tim Vine?

The fact it’s a struggle to come up with someone reflects the absence of engaging, all-round entertainers between the ages of 40 and 60 from British television. They’ve been driven out of the business, or rather, not allowed to get in.

But then, when you think of the esteem in which Johnny Carson was held – someone an entire nation would stay up for, someone a population looked to amuse, distract and console them no matter what the day had brought – and then think of the esteem which Britain metes out to talented, intelligent, dignified telly folk, perhaps we just don’t deserve his like on our screens. 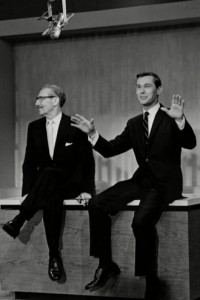 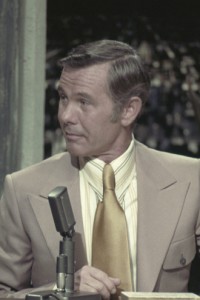 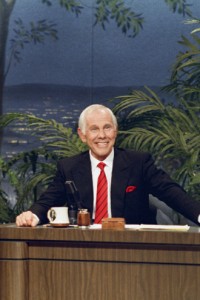