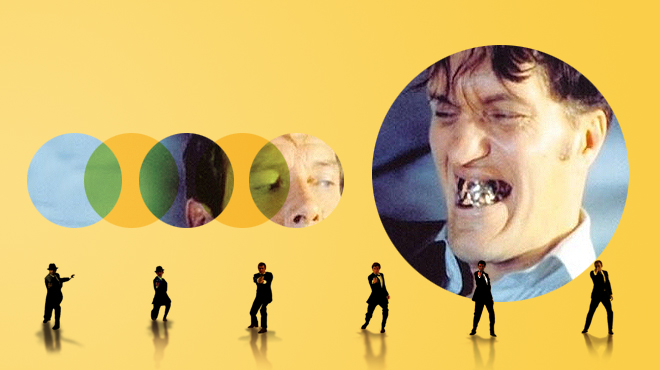 Yes, he is talking about what you think he is, and yes, he has done it before. But never with this much elan and, well, balls. (Diamonds are Forever, 1971)

For someone preoccupied with launching a new civilisation that is literally out of this world, Hugo Drax (Michael Lonsdale) is a diabolical mastermind who is also remarkably down-to-earth. He is forever bustling about the place being all domestic and fussy, whether it’s looking after his pet dogs, doing a bit of business over the phone, or – as here – sipping a nice cup of tea while instructing his henchman to trap Bond in a centrifuge machine until his face melts. But he’d never dream of saying as much out loud, oh no, hence this winningly decorous turn-of-phrase. What a guy. (Moonraker, 1979)

…in the most camp and insouciant manner as is possible while standing in a cave full of mudbaths opposite someone who’s murdered your wife. (Diamonds are Forever, 1971)

0016: Simply having a wonderful Christmastime

Fine, she exists purely to enable one of the greatest closing lines of any 007 film. But Christmas Jones (Denise Richards) is more than just a jokey pay-off. She is one of the biggest and best jokes in the Bond franchise, right from the moment she first appears, disrobing her oh-so-serious nuclear overalls to reveal an oh-so-not-serious pair of hot pants. We are all in on the joke, including Bond. When six kilos of weapons-grade plutonium go missing, she wails: “I have to get it back, or somebody’s gonna have my ass!” 007 waits a well-timed beat before countering: “First things first.” (The World is Not Enough, 1999)

There is absolutely no need for Auric Goldfinger (Gert Frobe) to have turned one entire wing of his lair into a collection of massive automated ooh-look-at-this models, but the fact he has done so, and all for just one five-minute chat with some mobsters, impresses them, us, and above all himself, immensely. After all, why bother with the back of an envelope when you can wield a giant pointing-stick at a hundred miniature trees? (Goldfinger, 1964)

Not just any kind of woman. “I’m looking for Dr Goodhead,” Bond announces, with only the trace of a smirk. “You’ve just found her,” she replies. “A WOMAN!” 007 deduces tartly, apropos of nothing and everything in particular. “Your powers of observation do you credit, Mr Bond,” she acknowledges, with only a well-judged modicum of outrage. (Moonraker, 1979)

“When one is in Egypt, one should delve deeply into its treasures.” So that’s where Tony Blair has been going wrong. (The Spy Who Loved Me, 1977)

His job is checking radiation shields. He is “Klaus Hergersheimer, G section.” He is Bond’s alias for slipping into Blofeld’s laboratories and annoying the comedy Cher-man scientist Dr Metz. He is told to “please leave, you irritating man.” He does so. The real “Klaus Hergersheimer, G section” then enters. He’s checking radiation shields. Look, all of this is damn funny in the film, go and watch it. (Diamonds Are Forever, 1971)

Vexed by the apparent idiocy of Q’s inferred successor, Bond has an important question. “You’re not retiring any time soon,” he asks the old man, “are you?” “Now pay attention 007,” Q replies gently. “I’ve always tried to teach you two things. First, never let them see you bleed.” “And the second?” “Always have an escape plan.” And with that he presses a secret button and sinks slowly out of sight. We will never see his like again. (The World is Not Enough, 1999)

…tomorrow, when we complete our countdown and discover the greatest 007 moment of them all.