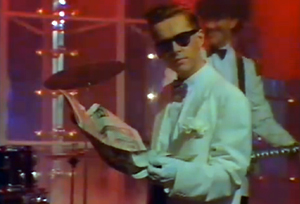 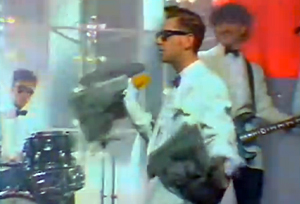 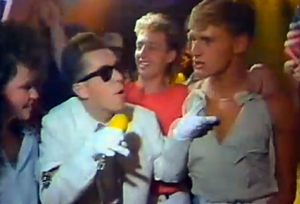 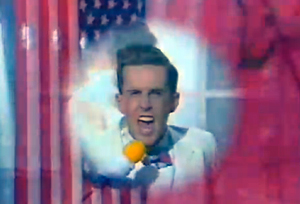 You may think there’s another moment involving this band on this show that could also feature in this list, and you’d probably be right, but this lesser-spotted performance is well worthy of further study. Such was Two Tribes’ marathon run at number one, the band ended up performing it on Top of the Pops on nine separate occasions, and for the eighth time, decided to go all out to give this utterly thrilling piece of eighties pop the visual accompaniment it deserved. Hence out came the suits for a performance that begins with Holly ripping up a copy of The Sun after they’d printed some rubbish about them (note the headline “STREET STAR VERA FACES SACK”, just the 25 years before Liz Dawn actually left) and, after Patrick Allen gets his terrifying words on screen, the frontman makes his way around the studio, recreating the video by “reporting” from the frontline, while the rest of the band are clearly having a whale of a time up on the stage. The audience play their part too by waving their US and USSR flags – clearly not all aware of the political point being made – but they’re trying, bless them. As we’re seeing on BBC4, often the most spectacular songs could be stymied by dull presentation and low production values on Pops but this performance illustrates the show at its peak under the auspices of Michael Hurll (although he was actually on holiday for this show and his deputy Gordon Elsbury was in charge), flinging the kitchen sink at its acts and making Shepherd’s Bush look the most glamorous place in the world. Sadly the record finally fell from the top spot a week later so they could never show it again, and indeed its non-appearance on TOTP2 over the years actually led some people to suggest it had actually been wiped. But even if it only exists on mushy old VHS, it still sparkles with excitement.