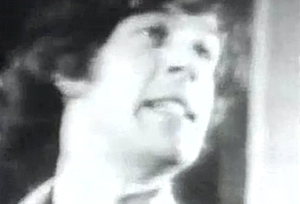 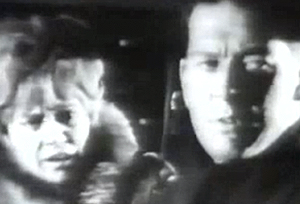 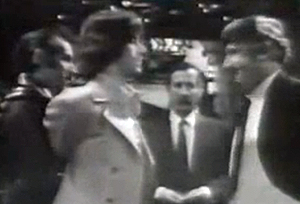 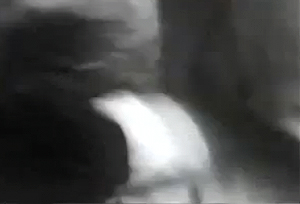 This is really two moments stuck together but together they make for some quite spectacular television which certainly unsettled us in 1992, so Lord alone knows what the viewers in 1969 made of it. Big Breadwinner Hog was, as you’ll be aware, the fantastically violent action drama with a none-more-sixties title starring that nice Peter Egan as a gangster making his way through the London underworld. As Denis Forman points out in TV Hell, which is where you’ll probably have seen it first, Granada announced that the first episode contained “a slight fracas”, which was a rather euphemistic description for a bottle of hydrochloric acid being thrown in someone’s face. The idea is unpleasant enough, but it’s Mike Newell’s rather trippy direction that really puts the top hat on it, with its vivid close-ups (which may have been less jarring on 405 lines), plus the c rash zooms into the helpless onlookers and the absence of any dialogue bar the constant “Agh! Urgh! Aargh! Uurgh!” of the victim, the combination of which made sixties viewers throw up in revulsion and then overload the switchboard. The other TV Hell clip is equally unpleasant, though rendered slightly amusing by how similar it is to the proceeding clip, where Hog endures several blows to the stomach, captured again with the same crash zooms, close-ups and various aghs and urghs, accompanied this time, for reasons we’re not too sure about but add to the unsettling nature, by the sound of Elvis. It may well be the case that those two clips were actually pretty atypical of the whole piece but shown together the series certainly seems relentlessly revolting. You’d have to say too it’s one of the most vivid and accurate portrayals of violence seen on television, stripped of all glamour and distance, shoving it right in the viewers’ face and refusing to look away, instead draggin g you even closer into the action, and there’s no dialogue to either make it all seem quite cool or even put any kind of moral in there. Just a load of “Aagh! Uurgh! Agh! Urrrh!” We’d love to have seen the script for that, actually, no wonder the ITA were so desperate to see them. Obviously, Big Breadwinner Hog as a whole is eight hours of intense and brooding drama but those two clips alone are utterly compelling and eye-catching, and are truly unforgettable.