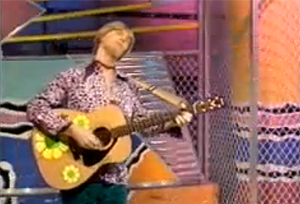 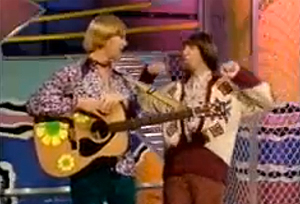 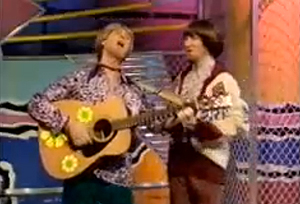 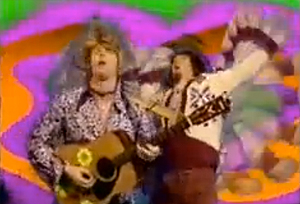 So maybe it wasn’t Tiswas, but thanks to Trevor and Simon there was plenty on Going Live for the grown-ups to enjoy, none more so than this bit if inspired daftness. In fact this was one of the final appearances of The Singing Corner, one of their earliest characters and probably their first to catch on among the general public. The sketches worked on two levels – kids in the eighties had still seen enough of these rather earnest singer-songwriter types on the likes of Rainbow to grasp the concept, while for the older viewers there was always the delight at the pair throwing in loads of archaic references to sixties pop that went right over the kids’ heads. Add to that the perennially popular opportunity to make a current pop star look really stupid. Despite being based around just one proper joke – modern songs sung in a twee fashion – there did actually seem to be some character development as well, with the pair becoming increasingly psychedelic. Hence, this sketch where, after some more pop culture references, Bob Corner asks Don Singing (that was their names) to broaden their musical palate with some Hendrix-inspired vibes. The first attempt is great fun, but the second attempt is inspired, and the punchline is a masterpiece of comic timing. Of course, Pip Schofield roared with laughter at all their stuff but the warm laugher and spontaneous applause from the crew is an obvious sign of how successful they were, as cameramen are a notoriously miserable bunch who have seen it all and didn’t much care for it the first time round. If you can make them laugh, you’re clearly something special, and for jokes like this at eleven o’clock in the morning, Trevor and Simon demand respect.