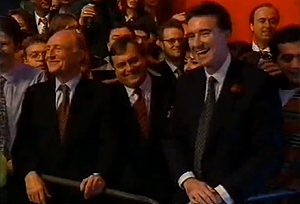 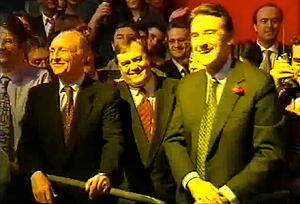 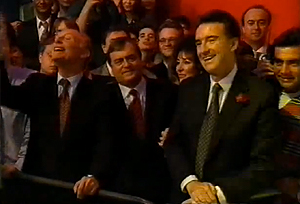 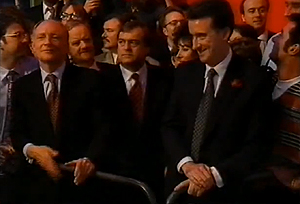 Ooh, a bit of controversy here – is this a TV moment or just a moment that happens to be on TV? Well, we’re saying it’s the former because all the fun of it comes from the way it’s framed, David Dimbleby’s droll introduction and, most obviously, the fact they keep it on screen for a ludicrous amount of time ensuring it becomes more and more undignified. It’s about five o’clock in the morning of Labour’s election win in 1997 and the crowds are gathering at the Royal Festival Hall waiting for the new Prime Minister to arrive, where he’ll be met by some of his party colleagues. Right at the front are Neil Kinnock, Peter Mandelson and John Prescott, so the camera zooms in on them. However, none of them really knows what to do with themselves. Mandelson keeps himself busy by waving at various people, while Kinnock does the absolutely classic old man thing of absent-mindedly tapping his fingers completely out of time with the beat. Yet it’s Prescott who steals the whole scene with his grudging bop, clearly not fussed with having to stand around, his perennially grumpy demeanour making for a hilarious contrast with the rest of the scene and in particular the two drunkards behind him who are having a whale of a time. The whole shot couldn’t have been framed better and the fact we stay on this fantastically awkward tableau for a good minute or more makes it all the more hilarious, and testament to the director’s eye for a great shot. We could happily watch this for hours on end. In the end, though, Tony Blair turns up and ruins it. In so many ways, eh?