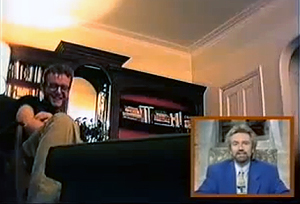 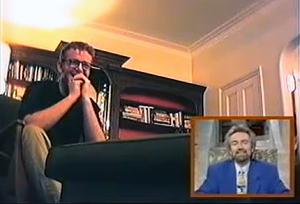 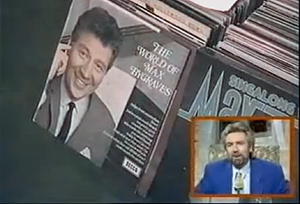 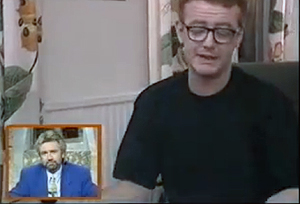 Here a question for you – what does the acronym NTV stand for? Everyone assumes it’s Noel Television but that’s surely the opposite of what the feature is, the point is it’s not Noel on the television, it’s you. In fact we think it was originally announced as standing for Now The Viewer, which makes more sense. In any case it’s worth remembering what a fantastic feature it used to be, although less so in its later incarnation when the stunts got bigger and the victim was virtually reduced to a walk-on part. Far better was the simple original format when Noel simply clicked his fingers and you were on the air, and we’re pretty sure that there was a real frisson of excitement in homes across Britain that it could be you that week. The House Party liked to push the boat out for the final show of the series and the end of series two was no exception w hen a celebrity found themselves making a surprise appearance – and that turned out to be one Chris Evans, slowly becoming very famous. At the time, House Party was an absolute must-watch and its innovative features and high production values were certainly acclaimed in the industry, and Evans had often discussed his admiration for the show and its host on air. One reason why this piece works so well is the obvious mutual respect between the pair, with Noel clearly flattered by Evans’ enthusiasm for his work (including the conversation Noel relates from their meeting the previous night) and Evans hugely impressed by the way it all works, no doubt making mental notes for the impending Don’t Forget Your Toothbrush. Of course this whole sequence is responsible for one of the great unproven TV stories about what Evans was filmed doing before the show started and Baywatch was on, though Evans has always challenged someone to produce a tape and none has ever been forthcoming. In any case here are two people at the absolute peak of their powers, and while it would go wrong for both of them, and their shows, over the next few years, this seems like a kind of symbolic passing on of the light entertainment crown.