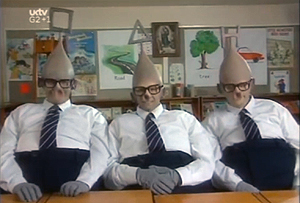 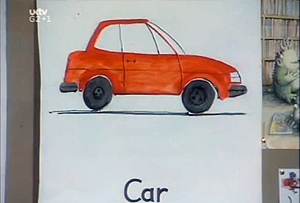 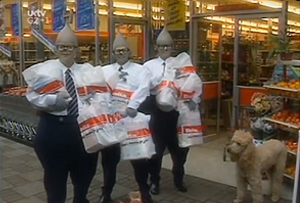 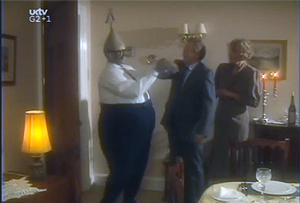 Here’s another classic comedy moment that, like Father Hernandez with Father Ted, is enlivened greatly by the wonderful rich voice and droll delivery of the late and much lamented Geoffrey Perkins. He’s certainly the perfect choice to narrate this hilariously daft sequence of sketches, but the whole team are to be congratulated for it, not least the costume department (with their “school uniforms”) and of course the make-up team who invented the Teletubbies five years early. The whole concept hinges around the fact that “tree” is a very funny word when shouted out loud with no context, which is proven again and again, its constant repetition making it all the funnier. Then there are all the great non-sequiter bits, like the aliens being easily able to identify the word “Jesus” and the bloke at the dinner party banging on about his Honda Civic. You’d have to say t hat Harry Enfield was perhaps one of the first people who realised what a potent audience teenagers were for comedy and you can be sure that school playgrounds the following morning rang to the sound of relentless “tree!”, and indeed Enfield himself said that he was walking down the road the next day when a van driver pulled over, jumped out, pointed to a lamppost, shouted “tree!” and then drove straight off again, Enfield being greatly amused not just by that but also the foreign tourists who had been watching it all and were completely baffled.