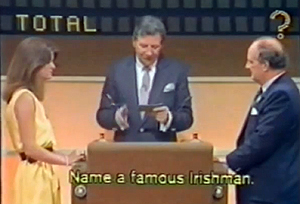 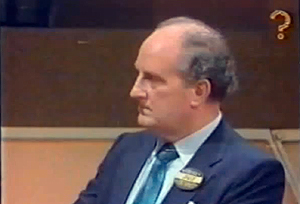 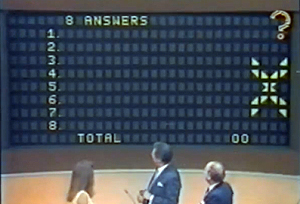 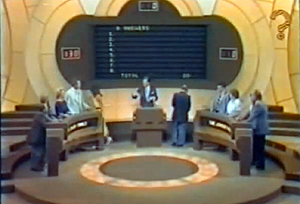 Yes, this is the episode with the turkey, but to be honest we’ve seen that bit enough given it’s just a very strange man being very strange. Even if you were so sure about that answer, why do you decide to completely write off the other four questions? Anyway, an even better moment came earlier in that same episode and is a great example of what would seem on paper to be a perfectly straightforward quiz grinding to a halt. The question is simple enough, name a famous Irishman. Knowing what else Bob comes up with later in the show, we can write off his suggestion of Disraeli as just what he does – if nobody else is going to say anything, he will, regardless of relevance. But then comes a relentless steam of ridiculous answers, each one sillier than the last and met with hoots of derision by the audience. So that’s Tom O’Connor, Des O’Connor and Thomas O’M alley (a cartoon cat), before the first set of contestants are dispatched and another pair come up. Max seems to be lulled into a false sense of security, laughing with them about the hopelessness so far, only to discover the new ones are just as clueless, offering up Hemingway and then, brilliantly, Shughie MacFree, who is not only Scottish, but also fictional (and Max mishears her anyway). So on we go for a third attempt, and while Garret Fitzgerald was indeed Irish, we think the contestant, who looks absolutely furious, was rather overestimating the current affairs knowledge of the audience. Eventually to everyone’s relief the great Taffy decides that this madness must stop and firmly states Terry Wogan, being rewarded with a carriage clock for saving the entire show. After that, the contestants get on a bit of a roll (including a rare halfway sensible, if obscure, answer from Bob), but there’s still time for the suggestion of Trevor McDonald. And it all seemed so straightforward. Rather overshadowed by the business later in the show, this amazing squence shows that you can never overestimate the ability of the general public to disrupt your best laid plans.