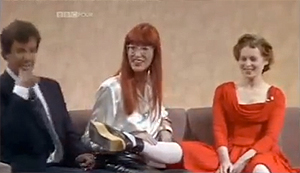 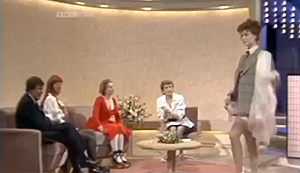 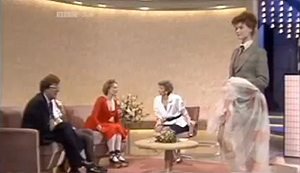 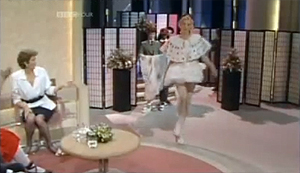 Another Morris connection here, too, as this moment was famously parodied on Knowing Me Knowing You…, and everyone spotted the reference. Sadly we’ve only got it here taken off a BBC4 clip show with various talking heads, but the meat of the action remains, where on an episode of Wogan, guest host Sue Lawley invited Vivienne Westwood to introduce her latest collection. Accompanied by a stupefied Russell Harty – in one of his last TV appearances – and Janet Street-Porter, the real stars of this sequence are the audience, who find the outfits absolutely hilarious and can’t stop laughing as the fashion show continues. The argument is that this is a massive show of philistinism from the audience who are simply being rude, but it can’t seriously be argued that the audience are doing anything other than reacting honestly to what’s put in front of them. Undoubte dly it was one of the first times that high fashion such as this was shown to a huge mainstream audience and the audience (and Harty) were doubtless simply representing the views of those watching at home. It’s Sue’s job to keep order and she tried her best, but her pathetic “you’re not to laugh!” isn’t going to convince anyone. You don’t like to see the public turning their noses up at anything that’s a bit challenging but this good-natured chuckling doesn’t hurt anyone, especially not Westwood who of course went on to enjoy huge acclaim and many of her ideas, slightly sanitised for mass consumption, are now familiar on the high street. But it’s a great example of the slight pomposity and self- importance of the world of fashion being punctured in full view. As for the KMKYWAP parody, we’ve never thought it was one of the most successful parts of the series because Alan appears to be in the right, although of course he’s still a loser because his producers have given him an item and guests that are totally unsuitable. In any case, the original is probably even more amusing.