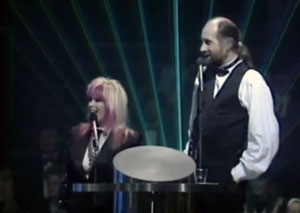 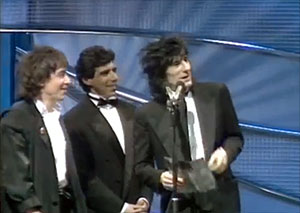 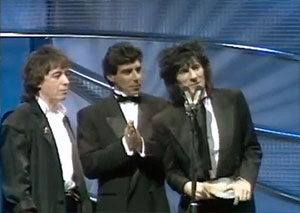 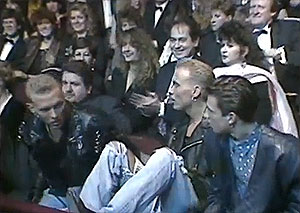 Frankly we could have filled this entire Top 100 with moments from the 1989 Brit Awards, so brilliantly shambolic were they – you’ve got the abortive Four Tops introduction, the non-appearance of Julian Lennon, everyone booing Kenneth Baker, Cliff complaining about everyone booing Kenneth Baker, the whole thing being rounded off by Randy Newman’s new single and loads more besides. Not for nothing did one BPI suit tell Smash Hits he assumed they wouldn’t bother televising them again. Amazingly, much of the ire was directed at, of all people, the cleaners at the Albert Hall who apparently wouldn’t let anyone in to rehearse, though we doubt that would have helped much, especially after the inexplicable decision to hand the presenters’ roles to Mick and Sam. Exhibit A whenever anyone says being a presenter is an easy job, the pair are absolute ly atrocious, completely failing to deliver any gag and interrupting each other constantly. The highlight of the whole thing, though – and presented here on the official Brit Awards channel – is this hilarious attempt to present Best New Act, or at least that’s what everyone assumes it is as never at any point do they say what the award is. In any case, after Ronnie Wood and Bill Wyman are introduced, Gary Davies, clearly unaware of whether he’s supposed to be there or not, comes along with them, before Mick tries to engage them in some rather off-colour banter. Unfortunately nobody can think of a suitable (certainly for a pre-watershed show) way to end that little diversion so there’s an extremely awkward pause before Ronnie decides he may as well announce the winner, and nobody stops him. Poor old Gary is at least conscious this thing is actually live on television, something everyone else seems to have forgotten, and suggests they should probably announce the nominations first. Everyone seems to agree with him but nobody’s in a position to do anything about that, so as the show continues to collapse in front of us, Ronnie simply gives up and presents the award to Bros, brilliantly with their feet up on the seats. It really does come to something when Gary Davies is the only person in the entire room who seems to have any idea about how a TV show should be operating, and sums up why the 1989 Brits are simultaneously the best and worst 90 minutes of live television ever broadcast.