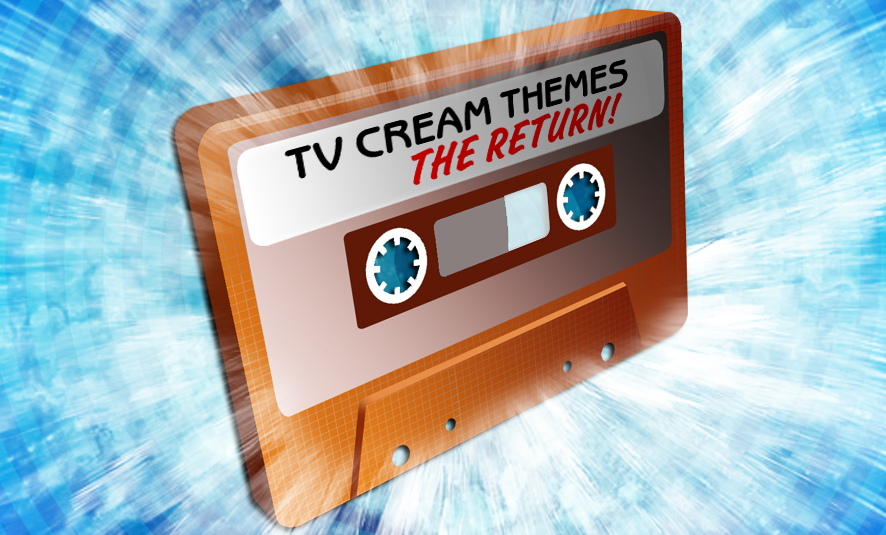 It begins! Throughout August we will be celebrating 20 years of TV Cream…

Now, the internet was a small place back when the site first got going, and in those days it was virtually impossible to get hold of the theme music from almost any of the shows in the nascent A to Z. If you wanted to hear the title song from The Boy From Space again, your best bet was a whine-afflicted microphone-up-to-speaker recording with a sarcastic sibling talking over the top that someone had encoded in RealAudio and stuck online somewhere.

But then TVC decided to put iffily-compressed downloads of Rainbow, Chigley, Top Of The Pops and Swap Shop on a brand spanking new Themes page. Upon which, suddenly everyone came out of the woodwork waving battered old vinyl, knackered old VHSes, and C90s with shockingly lo-fi recordings of impossibly rare themes with a bit cut off the start and the end… and our Themes page was the envy of the world, or at least that bit of it that cared about Ragtime.

Then one day a scary man made us take them down.

Anyway, as it’s our birthday, they’re back! Or at least the ones that passed the Soundcloud non-copyright-infringing algorithm. Yes! We have themes, and they live here.

To celebrate, we asked occasional broadcaster, Friend of TV Cream and Top of the Box author Tim Worthington to pick his 10 essential… TV Cream Themes!

Not the whistly theme music, but the full-on full-length Barnaby The Bear’s My Name song, complete with callback to that baffling bit where he had to put on a cardboard beak and be King Of The Birds, and superfluous second verse about eating the weather or something. All this time later, it’s still not out on DVD. Sort that out, please.

The ultimate back-of-the-mind what-was-that-thing-called first-thing-on-before-Swap-Shop import, charting the escapades of a Phil Silvers-alike bloke who turned into a young boy at hilariously inopportune moments, as is explained at unnecessary length in the sprightly chortlingly-performed theme song. The Magic Water was the thing that made him shrink, and it sounds as though some of it’s got into this recording too.

One of approximately seventeen million American-sourced comedy-action-detective series that were almost unbelievably given prominent prime time slots in the 1980s, and unlike the others, this one actually lived up to the promise of its blockbusting glorified fanfare theme music and opening titles showing the lead characters being chased down the street by a speedboat. “All I need is a ride… what could possibly happen?”

Digby, The Biggest Dog In The World

Strictly speaking a film theme, but do you know anyone who actually saw it in the cinema? Wimpily-delivered post-Pickettywitch ode to an accidentally oversized mutt prone to Jim Dale Reaction-occasioning near-cataclysmic comic mishaps, which may contain the line, “When I saw you there/With your long shaggy hair/I knew”. As far as we’re concerned this oh so ’70s ditty was on TV every Christmas and Bank Holiday and we don’t care to be proven otherwise, thanks.

Popcorn-esque plinky-plonk catchiness interspersed with a raid on the percussion cupboard, as mimed in the opening titles by a juggling-with-invisible-clubs Adrian Hedley and an exaggeratedly confused Janet Ellis.

It’s that five-beat football clapping thing, and Gary Holton takes the lead for a sub-UK Subs Thatcher-berating lament for “mindless empty days”. What you can’t see here, unfortunately, is the accompanying footage of graffiti-strewn walls, one of which featured a crudely rendered nudey lady with unfortunate prominence.

“You’re imprisoned indoors/feeling pale and wan/but remember…life Stilgoe’s On!” Puns, torturous rhyming couplets and self-accompanied Yamaha DX cheapness, with the verses swapped round in the end titles for a bit of variety – what more could you ask for?!

The original hard-rockin’ one, as provided by Noel’s original Best Pop Star Mate Mike Batt, and presented here in rotten crumbly grating quality with the all-important intro missing. Essentially the closest thing there is to a TV Cream mission statement, frankly.

An epic Galactic Nightmare-esque pocket rock opera for this scarcely-recalled BBC primary schools effort featuring Christopher Lillicrap zooming across the galaxies with his ‘no-good robot’ in search of long division-related shenanigans. Without hazily-recalled nonsense like this, there would never have been a themes page, or even a TV Cream full-stop. Working it out together makes the problems fade away!