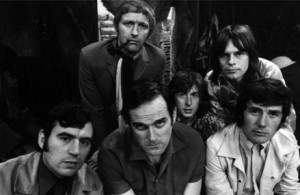 LOAD-BEARING LEVIATHAN of British comedy, once upon a time scaring Beeb executives with sketches about matricide and masturbation, nowadays a bunch of craggy sixtysomethings happy counting the pennies from yet another merchandising spin-off or tuneless repackaging of the glory years. But hey, they’re old and who’s to blame them? Having entertained “millions” by getting slapped about the face with fish and tumbling into canals, wrestling in muddy fields dressed as washerwomen, chasing coffins over Yorkshire moors, smashing bricks on their handkerchiefed heads, spontaneously combusting, being surrounded by film, being eaten by giant hedgehogs, being argued with, being erroneously promised the transaction of a portion of cheese, having large weights dropped on them, experiencing deja vu on milk floats, being cut out and moved around on screen like in a giant comic, and being assailed with cries of “Lemon curry?!” by BBC newsreaders, our men deserve something of a rest.

Your relationship with the collected efforts of Cleese, Chapman, Jones, Palin, Gilliam and Idle will pass/have passed through a number of stages:

2) 6th form (poring over the scripts, reciting random pieces of dialogue with one another for no reason, performing sketches in the common room)

4) Thirtysomething (falling in love with them again and buying up all the tie-in books, CDs, novelty crap and side projects off eBay)