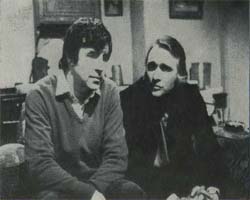 A companion piece to the previous week’s Plaintiffs and Defendants. Peter (Dinsdale Landen) and Hilary (Georgina Hale) wake up, facing the prospect of a long drive to the house of Charles (Alan Bates) and Alison (Rosemary Martin) for Sunday lunch. After a floundering attempt to integrate their recalcitrant son Jeremy with Charles’ sizeable brood, the men retire to Charles’s study, to discuss their jobs (Peter works in Publishing, Charles teaching art), and past affairs – one being Peter’s torrid affair with a disturbed girl, the other being, circuitously reached, a public school infatuation between the two men, which, it transpires, has informed the bulk of Charles’s first novel, the manuscript of which he’s brought for Peter’s consideration.

This uneasy digging up of past incidents is intercut with scenes from the boys’ schooldays, showing the growing, yet necessarily suppressed, affection between asthmatic, music-loving Charles and cricket ace Peter. Transition from past to present is brilliantly handled by Gray, and director Michael Lindsay-Hogg, via a matching shot technique which is neither over-clever nor intrusive. The two boys caught skulking in the music room by a master opening the door cuts swiftly to the men in the study as Alison strides in. Similarly, Charles’s handing over of the manuscript is mirrored by the young Charles, having just recited a poem to Peter, explaining that Peter is the poem’s subject, resulting in some violent denial from the latter. It all cuts seamlessly together, so that, after a few initial scene-setting shots to orient the viewer to the technique, the narrative can flit back and forth in time with no slackening in pace, thus giving the past a closeness to the present which is wholly appropriate.

Links with the previous play are at once obvious and obscure – the names remain the same, but occupations, actors and families have been swapped about. In a nice touch, the housemaster who gives the boys the trad public school lecture on “special friendships” (“you should reflect that too much too intense friendship can lead to too many complications for a chap who wants an uncluttered life”) is played by Simon Callow, who, as Bates’ pupil in the previous play inadvertently gave a different kind of life lesson. Other little clues are fun to track – in Plaintiffs, Bates absent-mindedly scans a picture of the public school cricket team he used to play in, while the “affair” mentioned in Sundays could refer to Joanna in Plaintiffs, except now she’s referred to as an Australian. But Simon Gray never lets these amusements override the two plays’ central theme of middle-aged torpor and bitterness, at the mercy of an inescapable future (the death in Plaintiffs) and, here, an equally inescapable past.