We’ve got, as Kenneth Tynan might say, a right one here, Alan. Young man John Rainbird attempts suicide by jumping from a hotel window, and as doctors operate on him to save his life, distorted flashbacks of his unhappy life with his brutish, domineering parents appear in ever more outlandishly exaggerated forms. Father (James Cossins) in particular is gung-ho till Tuesday, watching horrific (and genuine) footage of Vietnam napalm victims in his front room, and exhibiting dismay at the ‘safe’, push-button style of modern warfare in a fantasy sequence set in an army recruitment tent on a football pitch before a cigar-smoking aristocratic male nun crashes his white Jaguar, with his son in the passenger seat, for the first of several times. The nun is played by the same actor as the nefarious surgeon who seeks to play God with the son in real life. (We would try to explain all this, but there’s only so much room on the internet.) After much more of this, the hapless son is brought back to life (after, it appears, devouring his father with the help of three obliging, and suddenly quite naked, female nursing staff) but remains in a permanently vegetative state, which it turns out is fine by his possessive mother, who feeds the gibbering wreck tinned goo on a hillside in your standard bleak ending.

Swinging from medical tragedy to melodramatic sci-fi to hysterical satire, this highly ambitious play packs a hell of a lot in to both text and direction, its mix-and-match mise en scene matching the nightmarish confusion of events and dreams in the comatose boy’s mind. No target is left standing – middle-class familial torpor, political corruption, corporate greed, medical misanthropy and organ-harvesting, the paranoia and sexual unease of young manhood – only John’s war veteran granddad gets anything like a sympathetic look-in (there was quite a tendency in plays of the post-Lord Chamberlain ’60s to venerate the elderly as profoundly as they excoriated their immediate forebears).

All this scattergun satire is pitched slightly – but only slightly – above the level of your average op-ed newspaper cartoon. The actors don’t quite have ‘THE ESTABLISHMENT’ and ‘BIG BUSINESS’ written on their hats, but in many scenes they might as well. It’s either the zenith or the nadir, depending on your point of view, of the ‘dark’ and experimental tendency of Play for Today.Let’s say, for the sake of argument, it’s the nadir.

We present, as evidence, a staged boxing match in the family front room, with son in full suit of armour. When the ref (Grandad) demands he ‘step onto the scales’ to be weighed, the ‘scales’ turn out to be… a pair of inflatable fish. Honest. Already vague enough in its premise, Clive Exton’s play fell under the flamboyant aegis of director Philip Saville, who was undergoing something of a wayward streak at the time, even by his own standards, and interpreted the script in a decidedly bizarre way. When Exton found out he decided that, perhaps, this production wasn’t going quite the way he had envisaged, and disassociated himself from the work – a publicity puff in the Radio Times saw Exton waxing lyrical about the trials and techniques of the television playwright, with hardly a mention of the play in question, let alone its content. In one of the few half-decent satirical lines, Mum and Dad deplore the modern muck that passes for modern entertainment, pining for something that’s well thought-out and nicely photographed’. This mocking of conservative tastes would have worked better in a play that didn’t make the cosy conventions of TV drama look like paradise in comparison with its own boorish self-delusion.

Incidentally, Exton – after starting as a strictly naturalistic ‘kitchen sinker’, moved, via Wednesday Play The Boneyard (about a policeman who experiences visions, based – as was Joe Orton’s Loot – on the Inspector Challenor case) to this highly experimental work. Then, moving through science fiction (Doomwatch, Survivors) via a few big screen successes (10 Rillington Place, an adaptation of Orton’s Entertaining Mr Sloane) he matured into a highly successful ITV drama writer/adaptor (Poirot/Jeeves and Wooster), rounding off a distinguished career with whimsical Felicity Kendall vehicle Rosemary and Thyme. Not figuring highly on Exton’s CV while he was still with us, this play (or at least, versions of it made by the various countries involved) was transmitted throughout the EU, no doubt to embarrassed silence in fourteen languages, as part of The Largest Theatre in the World, a Eurovision project. Oh, go on then: Nil points. 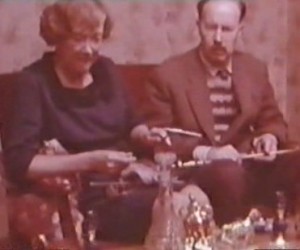