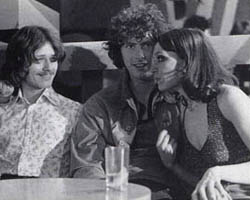 Shy and sarcastic teenage Oldham undertaker’s assistant Trevor (David Threlfall) knocks about with drinking pal Ronnie (John Wheatley) and his girlfriend Sandra (Angela ‘Who’s Who’ Curran). The superficial world of pubs and disco nights out contrasts with Trevor’s serious experiences at work under Mr Garside (Clifford ‘Hard Labour’ Kershaw) – a grim business deflected, badly, with off-colour jokes. Sandra’s friend, forthright, gum-chewing, slightly tarty shoe shop assistant Linda (Kay Adshead) takes a shine to Trevor, but his defensive reticence (and, worse, his abject refusal to dance) makes the courtship an excruciating ballet of non-sequitirs and dropped glances, especially in a five minute seduction scene in which, after much procrastination, Trevor clumsily grapples Linda into a clinch, then falls into a giggling fit after she suggests he accompany her upstairs.

In a final, downbeat scene, Trevor drives a bride to a church in the undertaker’s saloon (serving a creepy double purpose), and he and Ronnie take off in it, driving out of Oldham, into the Pennines and away from the small town claustrophobia. The moribund atmosphere of the place is of course echoed in the constant brushes with the dead and dying. Linda’s elderly neighbour collapses in their presence, and Trevor skilfully handles the situation to avoid a tragedy, though still can’t resist the occasional weak gag along the way. All face-saving jokery falls by the wayside, however, when he comes face to face with a cot death victim in the mortuary. This moment of unstinting cold reality (the camera does not shy away from showing the body) affects Trevor, but – this being a Mike Leigh film – it doesn’t magically change his character (‘for the better’, as it would in so many other pat dramas), merely reinforce his defensive barricades against a world that increasingly scares and excludes him. What’s essentially a character sketch of Trevor is given ‘life’ by the meticulous performances of Threlfall and Adshead and, in a first for Leigh, the film is effectively scored by Carl Davis.