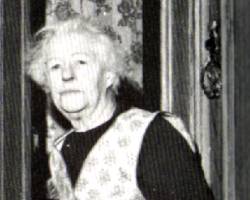 Taut tragicomic tale by Julia Jones, of progress and its opposition across the generations in a small Northern town. Elderly couple Ada (Hilda Barry) and Edgar (Leo ‘William’s dad’ Franklyn) live in an ancient terraced house, run down on the outside but kept sparkling clean inside, especially the incongruous grand piano, an heirloom of Ada’s father’s, which takes up the entire front room of the house. Ada’s nephew Willie (Glyn Owen) is the head town planner, a dynamic, no bullshit figure straight out of a business-based soap opera of the era (ironically Owen would play the initial incarnation of one of the titular trucking company clan in infamous ’70s soap The Brothers). Willie’s wife Mabel (Janet ‘The Day the Earth Caught Fire’ Munro, tragically in her last ever screen role) acts as his secretary, but is not entirely happy with his grandiose scheme to sweep away all the old town to make way for a new, ultra-planned environment. Visiting Ada, whose street is to be demolished soon, Willie comes up against a problem – the council bungalow allocated for the couple will clearly not accommodate the gargantuan instrument. Ada staunchly defends her right to remain with the piano, while Edgar, more keen on the proper garden that comes with the bungalow, tries to mediate. Meanwhile, Mabel encounters old flame Jeremy (James ‘Rainbirds’ Cossins) in his music shop – Jeremy, less dynamic by far than Willie, and passed over by Mabel two years ago for him – detects a tiredness in her, brought on, he claims, by the relentless Willie. Back in their slick, modern home, Willie and Mabel argue the toss about the piano. Willie suggests housing it in their house, but Mabel – never a fan or friend of Ada’s – refuses, suggesting Jeremy buy it off her. At the mention of the name, Willie flies off the hook, and a shouting match ensues.

Later, Willie meets up with fellow councillor Ted (Brian Wilde) and others (including Roy Barraclough) for band practice – the band being conducted by Jeremy. A vicious debate about the value of progress (and Willie’s marriage) inevitably follows, with Ted trying to calm things down. The street begins to be demolished, Ada and Edgar standing firm in their house, comically donning ARP firewarden’s headgear to cope with the falling plaster. Edgar’s antipathy towards Ada’s stance begins to show itself when Ted visits and tries to get her to see sense. Things come to a head in a comically disastrous Sunday lunch at the terrace, with Willie and Mabel at loggerheads with Ada and each other in the crumbling dining room. Willie suggests he buy Ada and Edgar a larger house, which thrills Ada. Edgar, however, has his own source of pride – he refuses to accept charity of any sort, and threatens to leave Ada for the bungalow. Finally Willie swallows *his* pride and takes Jeremy to Ada’s to see about buying the piano, but by then Ada has given in – she wants the piano to remain in the house. As the wreckage of the piano is removed from the remains of the street, Ada stands lost in the new bungalow, while Edgar contentedly works on the garden.

While touching on the sentimental side of things, Jones’ injection of humour keeps the play from collapsing into melancholy, and the way each main character’s particular pride gradually comes out to set them against the others is deftly handled, as is the terse Northern idiom of the conversations. The direction (from veteran James Cellan Jones) is simple enough, but for a “matching shot” device used to link scenes (eg. a scene ending with a close-up of Ada in tears fades into a close-up of the band practice contingent in raucous laughter) that eventaully becomes slack through overuse. Then there’s the heavyweight symbolism of the titular instrument, which is just about realistically transposed from an obvious piece of writerly symbolism into a believable, almost understandable foible of a stubborn and proud woman. This is partly down to the strength of the performances – Barry and Munro in particular are great during their flint-eyed exchanges with each other.