A wartime countryside idyll (closely modelled, of course, on Dennis Potter’s Forest of Dean domain) is populated by seven-year-old children playing in the sun who are, in a slight return of the childhood flashbacks in Potter’s Stand Up, Nigel Barton, played by “mature” actors. Colin Welland, doing Spitfire impressions in outsize shorts, squares up to Michael Elphick, local hard nut (but only “number two” in the village, the star being Wallace Wilson, never seen but often referred to in hushed tones) in a brilliantly observed push-and-shove verbal sparring contest (“Shut thee chops!”).

Eventually they’re joined by John (Robin ‘Poldark’ Ellis) and his stuttering, meek brother Raymond (John Bird), and contrive to trap and kill a squirrel. Meanwhile in a barn, pretty Angela (Helen Mirren) and plain Audrey (Janine Duvitski) play “house” with the ultra-shy and rather backward Donald (Colin Jeavons) who reveals much of his home life by swearing and shouting as the “daddy”, before the game breaks up into a vicious round of teasing by the girls.

It transpires “Donald Duck’s” dad is a PoW in Japan, and his mother beats him often, and possibly sleeps around (one of the children heard his mother say “them sheets could tell some stories”, so it’s assumed she’s a bed-wetter). Leaving Donald alone, rocking and muttering in the barn, the girls join up with the boys – now fully into “who’s the hardest” contests, with John and Peter at loggerheads. The girls take sides with relish, but a showdown is interrupted by a siren from the nearby PoW camp, and the children run into the forest, assuming an “Eyetie” PoW has escaped.

After winding each other up with fear something chronic, they return to the barn, thinking the PoW might be in there, but it’s Donald, who’s been obsessively trying to start a fire with some matches, and has finally succeeded. The kids, out for another tease, trap him in the barn until they see the smoke, and too late open the door to see Donald engulfed. They all disappear into the long grass, bewildered, sobbing, as the sentimental AE Housman poem from which the play takes its name is heard.

Easily Potter’s most popular single play, and it’s not hard to see why – as well as the recognition factor of that finely-observed childhood dialogue, the central conceit is inspirationally simple, unlike many of Potter’s previous deliberate, complex, almost diagrammatic rearrangements of reality and fantasy, past and present. And though bleak in the end, there’s a lot of warmth here that even Potter identified, admitting that somewhere within him there might be a much more wholesome writer than his audience – even he himself – is led to believe. But credit too must go to the acting ensemble, who make the constant switches from whimsical innocence to malignant vindictiveness perfectly believable, under the assured direction of Brian Gibson. 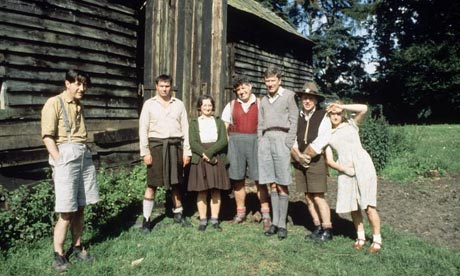