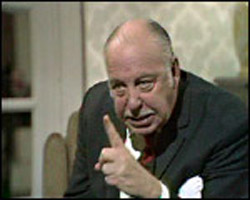 Highly politicised state-of-Labour entry, the first Play for Today from the sainted Trevor Griffiths. Bill Fraser plays Edward Waite, an aging Lancastrian Labour grandee who served his apprenticeship during the General Strike, who displays many of the rhetorical turns and mannerisms of various real-life party members, most obviously a Wilsonian forever-unlit prop pipe, preparing for his imminent ennoblement into the House of Lords. He is shown being interviewed in the conservatory of his spacious Surrey home by documentary maker Richard Massingham (Ronald Pickup), a high-born, publicly educated and very suave character who runs through a list of prepared questions about his early life in deprived Beswick.

That night, overcome by turbulent disinterred memories (rendered in a then-standard manner as snatches of audio flashback) Waite suffers a minor heart attack. On returning the next morning, Massingham comes face to face with Waite’s daughter Maria (Frances De La Tour), a schoolteacher with little time for the old Winchester boy’s inadvertently patronising attempts to converse with/interview her. Even more hostile is the son William (Jack Shepherd), a fiercely idealistic college lecturer who loudly takes apart both Massingham’s method of programme-making and his father’s political career over a fraught lunch.

The following day – Waite’s birthday – the quartet gather for celebrations, only for the talk to turn inevitably to party politics. William all but accuses his dad, and Labour, of achieving nothing in office (since the promised Socialist revolution was indefinitely postponed). Waite stands up for the party, presenting the case for practical politics and the voice of experience. Then William produces evidence from the University of Manchester files that show Waite repeatedly voted against the epochal strikes of ’26. Waite, however, stands firm this time (“One day you may find yourself doing something really serious, like running a ministry, and then you’ll see where dreams get you”) and leaves.

The next day Maria reveals to Waite she can’t accompany him to Buckingham Palace to accept the peerage on principle, and William decides Massingham is the lesser of two evils,a nd hands him his research on his father. The final, slightly abstract, scene shows Waite, in close-up, being interrogated by Massingham on the strike vote question, when the sound cuts out and the camera pulls back to reveal Waite, alone in the conservatory, in his baronet’s robes – a completely dishevelled figure.

As a first television work, this was something of a baptism of fire for Griffiths – Play for Today script editor Ann Scott asked for something from him to fill the slot left by a rejected work from another writer – Griffiths was given one multi-room set, no film inserts, and six weeks to deliver the finished work. Further restrictions, ironically imposed by the three-day week brought on by present-day strike action, caused about 12 minutes to be forcibly trimmed from the usual 75 minute running time. Given these strictures, it’s easier to forgive the occasional lapses into stereotypical “characters being mere mouthpieces for ideas” territory that is the bane of many lesser Play for Todays. The clash between pragmatic and idealistic Labour is, for the most part, grounded in convincing portrayals of a family torn apart by political and emotional tension.