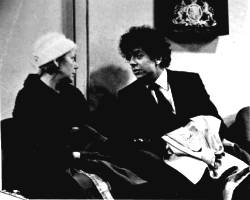 A comic look at popular notions of disability and “rights” from Good Life scripters John Esmonde and Bob Larbey. In a Hounslow terrace, Ray Collis (Ray Brooks) is woken by his wife (Judy Cornwell) to investigate a supposed burglar in the house. Finding a “crouching figure”, Brooks lashes out with a conveniently placed Zulu knobkerrie (an unwanted present) only to find his felled victim is dwarf Tiny Hackett (Rusty ‘Britain’s Bounciest Weather’ Goffe).

After confrontations with ambulancemen and sarky police officer Karl Howman, Brooks goes to work (an electrical components factory) to find word has got out about his confrontation, though not the size issue, and his mates, including Mike, an intellectual-basher and admirer of strength, inveterate joker Terry and nostalgic old Spud, feting their formerly quiet colleague as a hero. Unfortunately a snooping neighbour has witnessed the crucial detail, and the next morning the local rag reveals all. Stan, Ray’s long-term work colleague and friend of the family, is round immediately to offer advice about potential “ramifications”, but the talk turns sour with both him and Ray’s wife, as Ray finds himself suddenly having to defend his actions. At work, Ray’s mates paint a yellow stripe on his coat and royally take the piss.

Ray’s boss, a blithe Christian charity type who makes a show of employing what he calls “unfortunates”, calls him in and takes him to task. Someone from accounts slaps him on the back and, to Ray’s disgust, hands him a National Front leaflet. At the magistrate’s court, Ray finds himself alone with Hackett’s mum, and after much awkwardness finds the root of Tiny’s problems – he was dropped from a pantomime dwarf line-up and, alternative avenues of employment closed, turned to breaking and entering. In court, charges against Ray are dropped and Hackett gets off on probation, and Ray’s boss, having defended Ray, announces he will offer Hackett work – in Ray’s department.

A shaken Ray goes home to find more strife from the missus and Stan, she berating him for being spineless, and in her anger letting slip that she’s been relying on someone else for certain “manly duties”. Horrified, Ray clocks Stan’s guilty expression. Stan fakes a heart attack, pathetically, and Ray’s wife demands Ray take a stand and thump him. “No, you hit him!” demands Ray, and leaves for work. At the factory, with Hackett on site, the atmos is tense, though Ray has a new-found confidence of sorts. During a tea break, Mike finds his lighter has gone missing, and suspicion falls on the “new boy”. Mike goes up to Ray and asks him to do something. “No, you do something, replies Ray, then, when Mike flounders, “Tricky, isn’t it?”

What could have become a dull proto-anti-PC piece is leavened not only by E&L’s humour and ear for bland suburban dialogue, but a sense of genuine, if thwarted, humanity present in almost every character – Ray’s unfulfilled and domineering wife, Stan the upbeat confidante who turns out to be full of crap – it’s even hinted that Ray’s boss only employs “unfortunates” for the lower pay they demand. And Ray himself is not so much an anti-hero as a non-hero – he let his life fall apart long before Hackett broke his window.

This well-rounded approach is what made E&L’s sitcoms, from Ever Decreasing Circles through The Other One to even the much-derided Good Life (which had much more to it than its suburban twee image gives credit for) so superior. Where many more “serious” Play for Todays are content to move cipher characters around to illustrate a simplistic social hypothesis, this overtly light comedy actually explores the situation it sets up in detail, taking in all the “ramifications”.