“A story of lifelong sorrow and abandonment” 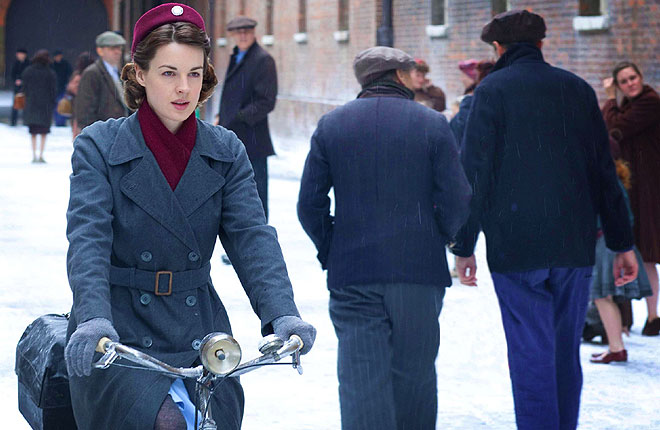 The BBC1 Christmas Day line-up is often held up as the perfect example of the best of British television, but one genre that’s been conspicuous in its absence in recent years is that of drama. Sure, EastEnders turns up as regular as clockwork, and Doctor Who has been a welcome addition in the past few years, but you’d have to search hard for the regular dramas that dominate the schedules the rest of the year. Even the likes of David Copperfield and The Lost World at the turn of the century owed more to star-spotting and special effects respectively than serious story-telling.

You have to go back to the ’80s for a time when drama made a regular appearance on BBC1 on Christmas Day with All Creatures Great and Small and Miss Marple both enjoying a couple of outings, but the reason for its rarity on the big day since can possibly be assigned to Richard Curtis’ recollections of sitting down happy with his family to watch Miss Marple’s Caribbean Mystery in 1989 – “two people were stabbed and one was forcibly injected with heroin. By the end of it we were totally miserable.” It seemed that drama like this was simply too bleak and complicated for Christmas Day, and certainly many of the BBC’s most successful dramas of the past few decades would make for unsuitable festive viewing. Silent Witness over the sausages on sticks?

Of course, EastEnders is hardly bursting with Christmas cheer but it does at least have the familiarity to ensure it can be watched with one eye on the turkey, while Doctor Who‘s mix of sci-fi and spectacle can entertain all ages, but other drama has fared far less well. While ITV1 have been more disposed to scheduling drama on Christmas Day, the mediocre audiences attracted by the likes of Doc Martin and Midsomer Murders – far smaller than they would usually enjoy on any other day of the year – appeared to confirm still further that when family members of all ages are watching together, and viewing is often interrupted by screaming children and regular trips to the tea table, people don’t have the patience or the ability to sit down to a hour or more of drama.

Christmas Day 2011, however, suggested that the right drama, sensitively scheduled, can break out on Christmas Day. Downton Abbey was the most talked-about show of 2011 and its festive special was a major event. It also benefited from one of the changes to how we watch our Christmas telly in recent years – while it wasn’t the most watched show on the day itself, it topped the ratings when recordings were factored in, with well over a million people deciding to save it for a less frantic moment of the holidays. Unsurprisingly, ITV1 repeated the trick in 2012 with another feature-length episode – and it wasn’t the only major drama on TV that night.

Call The Midwife had arrived on Sunday nights on BBC1 in early 2012 with little in the way of fanfare but the tale of the midwives in post-war Poplar caught on immediately, thrashing ITV1’s previously impregnable Dancing On Ice in the ratings and pulling in over 11 million viewers – up there with Downton as one of the biggest shows on TV. And, like Downton, it was considered ideal for a Christmas Night slot with its mix of pathos and gentle humour making for ideal festive fare. Its prime 7.30pm slot made it one of the biggest departures on BBC1’s Christmas Day for many years.

The results of the experiment were, however, rather mixed. Overnight ratings suggested that neither of the drama juggernauts had reached their full potential, both losing out to their soap competition on the other side. Call The Midwife did mediocre business and its average ratings were inflated by the last 15  minutes going up against the ITV1 news, a rather inelegantly scheduled bulletin purely there to ensure Downton started at the exact moment Call The Midwife finished. Not that it helped Downton much, though, as ratings for this year’s special – despite a major cast member being killed off – were way down on 12 months earlier.

Ratings for both shows did increase when recordings were taken into consideration, with each finding large time-shifting audiences – some evidence they simply weren’t the right choice for Christmas Day and would have been better appreciated on a quieter night. Indeed, with critics suggesting they were somewhat gloomy choices for the big day, it does appear as if Christmas Day viewers want something different than the rest of the year.

Despite the changes in prime time, the rest of the Christmas Day line-up was little changed from the familiar template. Breakfast on BBC1 was followed by a couple of cartoons – including another outing for The Gruffalo – and the service, though there was little massively festive in the lunchtime schedules with the final episode of Only Fools and Horses‘ 1996 trilogy (a special show, certainly, but not Christmassy in the slightest) followed by the film repeat Madagascar: Escape 2 Africa, though at least The Santa Clause wasn’t churned out again. The familiar annual outing for Top of the Pops followed at 2pm, then it was The Queen, this year for the first time broadcast in 3D, no doubt thrilling the dozen or so people who had the required kit.

After that, the last and definitely least in the Shrek series, Shrek Forever After, was the day’s big film premiere, continuing the franchise’s domination of this post-monarch slot in the past decade. The by now traditional new animation followed as the creative team behind The Gruffalo brought the popular kids’ book Room On The Broom to life. The arrival of the midwives meant Doctor Who found himself earlier than ever on Christmas Day with new companion Jenna-Louise Coleman being unveiled at 5.15pm, but the show’s army of fans all made sure their recorders were whirring away. Strictly Come Dancing was also on earlier than usual at 6.15pm, but the show’s light-as-a-feather fun was perfect for an early evening slot and, helped by the fact it didn’t go up against Corrie for the first time, ensured it was one of the few programmes that enjoyed a ratings increase from 12 months before.

EastEnders was, for the fifth consecutive year, the most watched programme on the day itself, and its large audience was passed on to the returning Royle Family. BBC1’s comedy line-up had brightened up a little in the past few years, with the likes of Miranda, Mrs Brown’s Boys and Outnumbered now all able to pull in large audiences, as opposed to earlier this decade when any existent comedy show managed to get the Christmas Day slot almost by default, but a new episode with the Royles was still a big enough occasion to see it cling on to the prime slot. After the news BBC1 wound down with a repeat of a festive Vicar of Dibley plus Have I Got News For You from a few days previously, before a late film. All in all, a fairly routine Christmas for BBC1, and as usual it enjoyed the lion’s share of the audience for most of the day.

ITV1 filled up most of the daytime in as cost-effective manner as possible, including a former BBC1 festive staple in Toy Story, plus The Nation’s Favourite Christmas Song, a clip show that may well have performed better at 11am than in its first showing opposite the Strictly Come Dancing final the previous weekend. Like BBC1, there was a film premiere after the Queen, in this case Tangled, but this lost out to its more familiar BBC opposition. You’ve Been Framed saw viewers into teatime again, then Emmerdale was split in half and found itself lumbered with two thankless slots, including at 5.30pm midway through Doctor Who where it pulled in probably its lowest rating of the year. Between the two at 6pm was a special edition of Paul O’Grady’s Battersea-based series For The Love Of Dogs, which had proved popular enough earlier this year but seemed terribly threadbare on Christmas Day – not even Animal Hospital, when that was in its pomp, had ventured this far into prime time. It also seemed something of a waste of a show that could have pulled in a far bigger audience any other night of the festive season.

Benefitting from its familiar 7.30pm slot and many viewers deciding Call The Midwife was better watched later, Coronation Street was ITV1’s biggest show and second overall behind EastEnders – a decent result. With a couple of films after Downton, it seems ITV1’s attempt to recreate last year’s winning formula was unsuccessful – not helped by the Beeb’s schedules making the day look rather overstuffed with drama.

The smaller channels carried on in their familiar fashion. BBC2 served up the opera, the serious documentary – with the return to TV of Sister Wendy Beckett – and the classic comedy, inevitably including Dad’s Army and Blackadder. Channel 4’s light entertainment efforts the previous year seemingly worked well enough for Gordon Ramsay to take up much of the daytime again with his Cookalong and Alan Carr to return at 9pm, while Lord of the Rings filled up most of the early evening in a cost-effective fashion. Channel 5 did even better with almost the entire daylight hours filled up with Gone With The Wind (four and a quarter hours) and Ben Hur (another four hours or so), though these epics surely couldn’t hold a candle to the three consecutive repeats of the channel’s never-ending fly-on-the-wall series about Eddie Stobart trucks. Greatest Christmas TV Moments followed yet again at 10pm – a title unlikely to be applied to the previous three hours.

It’s likely the Beeb will be by far the happiest from a Christmas Day when the recorders were working overtime – especially as Call The Midwife had beaten Downton Abbey on the night itself. The army of people recording Downton would have rung a  little hollow for ITV1 as it meant the all-important adverts were being flicked through at a rate of knots. For those watching on the day, the overload of dramas created the feeling of a rather stodgy, indigestible festive line-up.