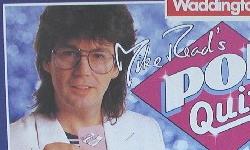 DARK-GLASSED frustrated musician who regularly serenaded his breakfast listeners or Roadshow crowd with a quick strum through Alice’s Restaurant, before running through the day’s listening on Radio 1 by doing bad impressions of all the jocks. Most famous for banning Frankie’s Relax, although largely self-perpetuated claims that Reid’s censorship helped the already-at-number-six waxing become a hit are urban myth, inventor of the distinctly Our Tuneish ‘First Love’ slot, forever wittering about playing tennis with Cliff, or about Dan Dare (as a result of which he briefly had a column in the relaunched eighties Eagle comic), became a millionaire through Curiosity Beret Bloke-endorsed Pop Quiz board game, had his own band (Mike Read and the Rockolas!) and released a single extolling the virtues of living in a high rise tower block to the tune of his “Mike Read! Mike Read! 275 and 285!” jingle (“me neigbours are bangin’ on the wall again!”) – as later replaced by Mari Wilson going “Mike Read, just what I’ve always… want-ed!” – and after a truly staggering amount of TV Work came to dominate saw out his final months on Ver 1 fronting a bizarre show in which he reunited listeners with long-lost copies of the 12″ of Robert Wyatt’s Shipbuilding. Trademark tartan suit somehow still audible on the radio, and he never, ever passed up the slightest opportunity to get out his guitar.