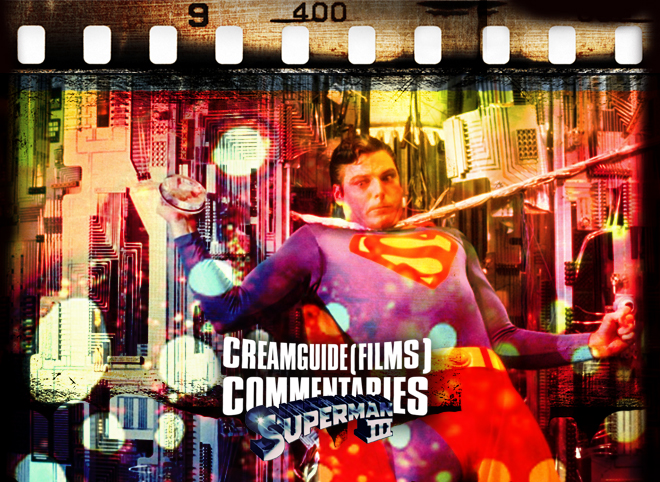 Creamguide(Films): Rise of the Robots!

It’s another instalment of swearing and getting Roshan Seth’s name wrong as Chris, Craig and Allan watch the sequel to the sequel to Superman. Yes, it’s top-notch Salkindery ‘SUPERMAN III’ layered over with sexual imagery and impressions of George Chisholm and Windsor Davies. Turn on the commentary as the Warner Brothers logo fades out and stand by with a sausage roll and a tin of Schlitz.

Should your browser allow, you’ll be able to listen to it above. Or download it here (it’s 115meg). If you haven’t already, you could also subscribe. And this is our RSS feed

CREAMGUIDE(FILMS) REVERSE FAQ
1. Pinewood, Canada and, erm, Milton Keynes
2. That’s probably the Milton Keynes bit
3. ‘Salami slicing’ apparently
4. –
10 PRINT “YOU ARE A JOBBY”
20 GO TO 10
RUN
5. We used to do that in Laskey’s
6. He isn’t
7. The Daily Star kicked it off in 1981. No idea if it ever featured in the New York Times or Cleveland Plain Dealer
8. Tomorrow Never Dies
9. It was the episode called “Don’t Tug on Superman’s Cape” in which his actual wife played his wife
10. Most fire engines are self-pumping, including the Green Goddess. However, we don’t think Diana Moran is.
11. It’s Gavan
12. And it’s Conal Cochran
13. Earth Angel. This used it first.
14. Bill Reimbold (and so is John Bluthal; see below)
15. $60m domestic gross
16. And Mario ‘no froff?’ Fabrizi, Dave ‘Cockleshell Heroes’ Lodge, Norman ‘Simon, Simon’ Rossington
17. Shirley Knight and Caroline Mortimer, it says here
18. And it’s still Roshan Seth
19. Ronnie Brody. He was, for example, the head chef in the Grace Bros canteen who says, “rissoles!” and puts his fingers up to Captain Peacock
20. David Daker. It’s not him
21. He actually started on telly and got his first film role fucking about behind Yul Brynner in The Ten Commandments
22. She went when she was four
23. Cecil Gaybody
24. He is
25. There is a Canadian ice hockey team called the Wheat Kings. Early European settlers in central Canada who cultivated the wilderness were referred to as ‘Wheat Kings.’ Neither group has had at any time control access to satellites which have functions to control weather systems.
26. It’s ‘vs’ not ‘saves’
27. He has 127 credits on imdb. Mind you, that includes telly. But that’s a lot of films.
28. Built in 1975 it sailed under a Bermudan flag and was scrapped in 1999
29. Robert Beatty
30. For some reason they seem to call them ‘Irish sausage rolls’
31. It grossed half as much as this at the box office proving that it ought to have found room for Bob Todd. Or a giant foam cowboy hay
32. We’re still not sure. We can’t be arsed watching it again with the sound up
33. It was in 1980