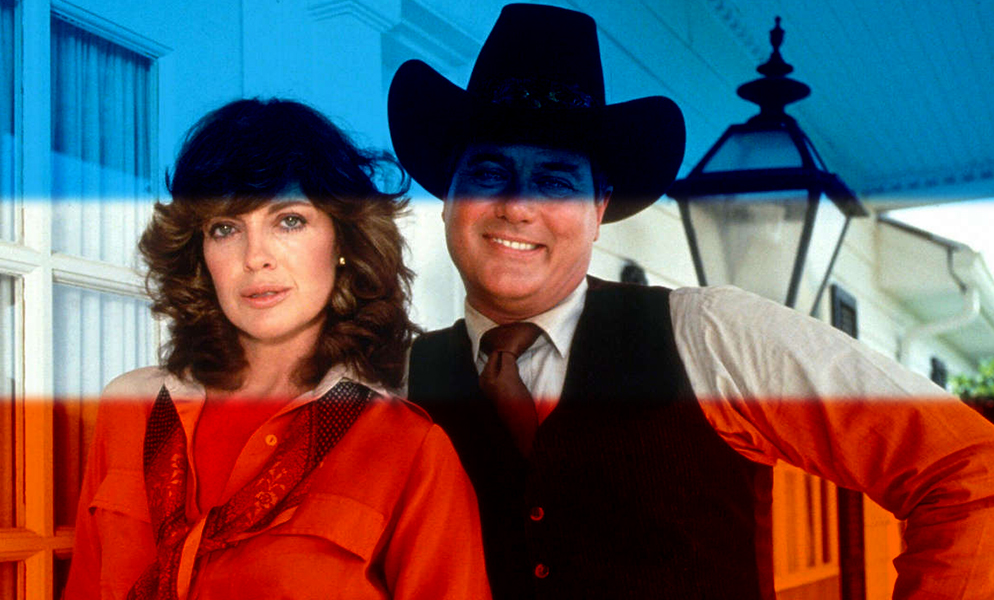 While the BBC wasn’t keen to ape American dramas, it wasn’t entirely dismissive of them either. On 5 September 1976, the long-running series about three siblings who inherited a haulage firm, The Brothers, drew to a close. For the previous four years it had entertained viewers with boardroom backbiting and avarice. Playing on mainly Friday or Sunday nights, The Brothers drew an avid audience keen to observe the machinations of a group of characters behaving abominably, and doing all sorts of things that the average viewer knew they could never get away with.

The arrival of Dallas then in 1978 may in retrospect look to have been a cost-efficient replacement. There was much about it that reflected the boardroom and bedroom battles of The Brothers, yet of course, the series – American in origin – had not been influenced by the BBC haulage drama in any way. Having originally pitched the US network, CBS, a show called Knots Landing, New York writer David Jacobs was advised that his idea was “too middle-class and tame” and was asked to come up with something bigger and brasher and to have it feature actress Linda Evans.

A self-confessed “unreconstructed novelist”, Jacobs envisaged Dallas as a serial dealing with issues of isolation and corruption. He found programmes such as The Waltons’ constant need to remind the viewer of what had gone on in previous episodes to be incredibly frustrating and so initially each episode of Dallas was to be self-contained. The show’s lead actor Larry Hagman was able to recognise the series’ essential ingredients right from the first script. “Dallas was Romeo and Juliet set among the oil fields, except there wasn’t one likeable character in the entire episode. Not one nice person. For television at the time, that was a real breakthrough. Mama was an old bitch. Daddy was an alcoholic asshole. My little brother was a womaniser. And my character, JR Ewing, was a combination of all of them”.

While the various shenanigans made for – what one reviewer described as – “steamy drama … on the arid Texas plain,” this was still not Dallas as we remember it today. As Jacobs admits it was largely down to producer Leonard Katzman that the programme became an international success: “They’re my children,” he reflects of JR, Bobby, Su, Pam, Sue Ellen and the rest, “but I sent them to camp early. If I’d been in charge of Dallas, it would probably not have been the success it is. I have this tendency to bring things down to earth. Dallas is up there. When I went on set I was shocked to see some people taking it seriously. I suppose someone has to. I don’t think I could have.”

Within five weeks, the series was a hit in America, playing at 10pm on Sunday nights and attracting the 12th largest audience of the week. The series abandoned self-contained stories in favour of a traditional episodic structure, beloved of soaps. In 1978 Dallas was offered to ITV, during an autumn Los Angeles buying trip. But Paul Fox (chairman of the network’s Film Purchase Group) and Leslie Halliwell (who, although an employee of Granada Television, bought overseas material for the network) turned it down. They saw the pilot only after they had purchased as much American programming as their budget would permit. This left the course clear for the BBC. On the strength of the same pilot episode, Bill Cotton and head of acquisitions, Gunnar Rugheimer snapped the series up just a couple of days later.

In the UK, Dallas began its inexorable rise in the ratings from day one. Scheduling the series at the weekend was in keeping with the tradition established by The Brothers, but running it on a Saturday night suited the show’s brash approach. It is felt that Dallas’ first two series were, by and large, more realistic then those that followed. However, one prominent British broadcaster was quick to lampoon the Texan soap opera from day one. “Rightly or wrongly,” says Terry Wogan “I was perceived in the BBC as the main architect in the runaway success of Dallas with the British viewing public. The rumour had started on my Radio 2 morning programme, with a few observations from me concerning the apparent fact that, although richer than Croesus, the Ewing family of Dallas had only one telephone – in the hall; that they had walk-in wardrobes, but only wire coat-hangers … The listeners, bless ‘em, responded; Dallas became a cult, and then a full-blown ratings winner”. Wogan was grateful for the easy copy the show provided him. “It was like a weekly Eurovision Song Contest,” he reminisces. “Over the top, full of ridiculous characters, deeply, deeply foolish … and riveting to watch … Americans watched Dallas from an entirely different viewpoint than we did. They thought it was a drama series of everyday Texan oil-billionaires; we thought it was a comedy. We were right”.

Katzman’s decision to end the first series on a cliff-hanger was pivotal in ensuring Dallas’ long-term success. Sue Ellen escaped from a mental hospital and ended up in a coma after crashing a car and prematurely giving birth. As the curtain came down on Dallas’ first season the question was posed: “Would baby and mother survive?” The pivotal moment in the show’s history came a year later when the decision was made to have the series’ lead character and main “bad guy,” JR, shot. “CBS made a request for four additional episodes, something practically unheard of so late in the year,” Hagman recalls. “But Dallas was the sixth-highest-rated show. The network wanted to keep up the momentum and take advantage of more advertising income. Mr Katzman and his writing staff plotted out the new shows, and as the story goes, when they began discussing the cliff-hanger, now a part of the Dallas formula, someone said, ‘Why don’t we just shoot the bastard?’”.

Next Monday: Britain could be facing its darkest hour