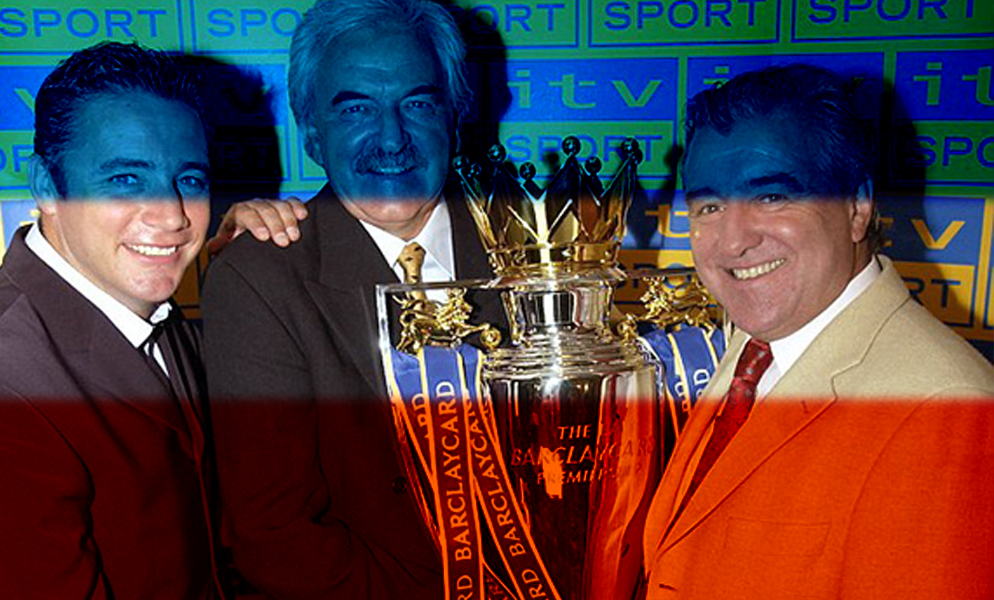 “What was that tactics truck?  I mean who on earth thought that was a good idea?” This is Wayne Garvie speaking in 2004. He ran the BBC’s entertainment department in the early 2000s.  “I’m a football fan and for the best part of a season, The Premiership seriously ruined my enjoyment of football.”

Critical reaction for The Premiership was, perhaps inevitably, extremely poor, but worse still, the viewing figures were disappointing. BBC1 had served up a special edition of The Weakest Link and the regular National Lottery draw, both of which had managed to beat the much-hyped football show, while ratings – of under four million – were much lower than for the regular light entertainment fare. The following week, despite an increase in the amount of match highlights and the immediate removal of ProZone, ratings sunk still further; the 3.2 million audience contributing to ITV’s worst performing Saturday night for five years. ITV claimed it wasn’t worried, saying ratings were exceeding those of Match of the Day – although given it was on three-and-a-half hours earlier, this was hardly much of a boast. No matter what ITV did, there were two major factors that would seriously affect The Premiership’s ability to pull in large audiences.

ITV claimed that one reason why the audience had failed to arrive in big numbers was the fact that, on both weekends, Manchester United – by far the most popular team among casual viewers – had played on the Sunday and therefore couldn’t be featured on the show. During the BBC years, the first choice encounter of every weekend had been saved for live Sky coverage on the Sunday, but now as part of the new deal, the second choice encounter was also played on a Sunday on pay-per-view. Even if there were limits on the number of times each team could feature in these programmes, this meant the Saturday fixture list was diminished still further and it was ever more likely that ITV would have the less appealing fixtures. This was especially the case in weekends following European fixtures, where to allow teams more time to rest, even more matches took place on Sundays. So not only did ITV have a lower standard of match to choose from, they were virtually obliged to feature the big teams whenever they were available, much to the irritation of fans of the other clubs.

However the most important factor conspiring against big audiences was the most obvious of all – it was a football programme. No matter how much they tried to hype it up, the fact of the matter was that people who weren’t very interested in football still weren’t going to watch goalless draws between Middlesbrough and Southampton. By aiming at a more general audience, ITV were alienating virtually everyone – football fans got less football than they’d previously received due to the inclusion of time-wasting whimsy and forced banter, while everyone else simply didn’t want to watch football, full stop.

“The talent was great.” Reasons Garvie. “Des is fantastic, Ally McCoist is brilliant, but what they tried to do was revolutionise football coverage within a kind of light entertainment framework.  Well you can’t do that.  You can’t take football which is something that that works for a particular part of the population and try to turn it into something that will also work for people who want to watch Blind Date.

“I could see where the thinking behind putting The Premiership on that place on a Saturday night had come from.  We had held discussions about that at Granada –  during the previous contract actually.  .  Would we play it there?  Because there was a sense that you’d come away from the football, you want to see the action there and then.  But of course that’s misunderstanding that not everyone in this country is really interested in football.  We appear to be, but actually we’re interested in live football.  You put an England game on at teatime on a Saturday that that is live.  Yeah you’ll get a huge audience.  But highlights packaging, isn’t the same.  There’s only a small number of people in this country who want to watch that.”

In fact, the first few weeks of The Premiership were interrupted for international fixtures – there was a fortnight’s gap between the second and third editions. England’s encounters with Germany and Greece were both hugely dramatic and exciting encounters, and drew massive audiences for the broadcaster that had the rights – the BBC, who a day after losing the Premiership had signed a new deal with the FA for live England and (first choice) FA Cup matches. Live coverage of Germany 1 England 5 was a much bigger draw for the casual football fan than highlights of Charlton 0 Aston Villa 0.

So almost from day one, it seemed a case of when, rather than if, The Premiership would be moved from its primetime slot. Throughout September and October, viewing figures stubbornly refused to rise from the high of 4.2 million. It was regularly beaten by Dog Eat Dogon BBC1. Des Lynam continued to suggest that everything would work out OK, when viewers “got used to it” – almost as if he was blaming the public for failing to understand the programme’s charms. Terry Venables later suggested the public was always going to be hostile towards ITV’s coverage, claiming that “nobody wanted Match of the Day to go, it’s like taking off Coronation Street”.

Eventually, ITV waved the white flag and announced that, from 17 November, The Premiership would be rescheduled to 10.30pm, with a repeat the following morning as Match of the Day had pioneered. The great prime-time experiment had lasted just three months. Replacing it at 7pm was a new series of Blind Date, and Cilla Black crowed that this was thanks to her personally persuading Granada executive Charles Allen to replace the football with more family-friendly output. Viewing figures for the first show were some two million higher than anything The Premiership had achieved.

The BBC could be forgiven for gloating – much as Des Lynam had done a year previously when he said he thought the BBC “could have dropped some of their dramas … no, make that all of their dramas” to afford the rights. Instead, Gary Lineker said he was slightly sorry to see the programme prove unsuccessful as they were both in the same business and, if football was seen to be unpopular, it affected them as well. But of course, the sport itself was still a major attraction – it was ITV’s misjudgement in overpaying for second-hand, second-choice footage that had been a mistake. As if to confirm, in the second week of the new late-night Premiership, just four goals were scored in the six Premiership games, three of which ended goalless and none of which featured any of the top five teams. For football fans, this was fair enough – these things happened in the sport. For peak-time ITV, though, it would have been a disaster.

Eventually the 10.30pm Premiership fell into of a groove, with many of the fripperies junked (including the tyres being let down on the Tactics Truck) and the main emphasis shifting to the match action. Late at night, the pressure to entertain was nowhere near as great, and the viewing figures for this late slot were often similar to those it had attained in peak time – proof perhaps, there is a finite number of football fans that will tune in, and if anyone else is in the slightest bit interested then that’s a bonus. This seems to be borne out by the fact that 2001-02 is generally considered to be one of the more exciting Premiership seasons – compared to previous seasons which had seen Manchester United dominate from the start, this one saw up to five teams battling it out until fairly late in the season. But even it didn’t pull in the viewers.

David Liddiment later claimed that the early Premiership could have been a success if they’d screened it at his preferred time of 6pm – thus allowing the light entertainment fixtures to continue in their familiar slots and not putting the football under so much pressure. However it’s hard to imagine this going down well with perhaps the most important section of the audience – the football fans, who would still be making their way home from matches. Perhaps the best primetime slot that The Premiership could have occupied would have been 8pm – opposite Casualty, where ITV traditionally struggled in any case and therefore wouldn’t have required such a large audience for it to be considered a success. Furthermore, it would have been an obvious male-friendly alternative to the female-favoured action at Holby. However, as a nation we seemed accustomed to football highlights after the pub.

In August 2003, the Premiership announced the results of the latest auction for Premiership TV rights, to come into effect from the 2004-05 season. The contract for Saturday night highlights went back to the BBC, who bid substantially less than ITV had splashed out three years before. The commercial channel bid even lower, almost as a token gesture towards keeping them. It was generally accepted that ITV overbid in 2000. It ranks alongside Eldorado as one of the most expensive and notorious failures in television history.

The 7pm Premiership is remarkable in that almost everyone knew from day one it was a terrible idea. Yet it is perhaps worth pondering what might have happened if, for some unexplained reason, it proved to be successful. Would Blind Date have ever returned to Saturday nights? Would the evening be filled with evermore niche programming? Would the tradition of family entertainment on that night have gone forever?

As it happened, light entertainment was back with a vengeance …

Next Monday: I’m sure the tune was in there somewhere