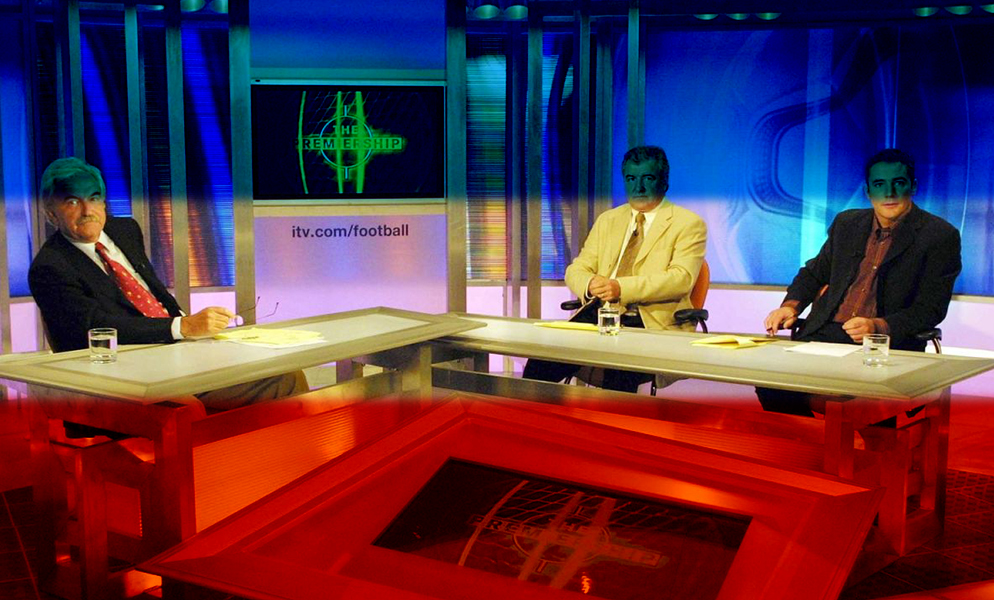 The Saturday night schedules by which all the others are judged are those of BBC1 in the 1970s. From Doctor Who to Dick Emery, they are considered the high water mark of family entertainment. And each week, amongst the drama, comedy and variety, was an hour of football highlights.

Starting on BBC2 in 1964, Match of the Day switched channels in 1966 and became a familiar fixture on BBC1 at around 10pm, enjoying huge audiences. This was partly because it was one of the few places you could actually see football on television – the Football League didn’t allow live matches, fearing a detrimental effect on attendances, and permitted both the BBC and ITV to screen only one hour of highlights from a very small number of pre-selected fixtures. The standard MOTD included just two matches, and if they turned out to be boring then it was tough luck. Furthermore, they were also obliged to screen matches from all four divisions of the league – and a set number of the lower matches had to be the main game.

Despite the obvious flaws, this system persisted for the entire 1970s, despite a scare in 1978 when ITV announced that they’d won exclusive rights – a deal which was quashed by the Office of Fair Trading. However ITV did manage to get one aspect of the deal changed, and so from 1980 the two broadcasters swapped over the Saturday night spot every season, with Match of the Day moving to Sunday afternoons in 1980-81 and 1982-83.

By this point, there was much dissatisfaction with the state of affairs. At a time when more and more sport was televised live, the archaic highlights system was outdated, and being forced to show unappealing lower division games was hardly the best way to increase audiences. Attendances at grounds were decreasing as well, so the League’s efforts to ration coverage seemed to have little real positive effect. Eventually the broadcasters got their own way, and the 1983-84 season saw the BBC and ITV each televise five live League matches over the course of the season.

From then on, it became apparent that live coverage was the way to go – especially as the BBC announced that their research showed the number one sport on television was now snooker (based more or less entirely on the 18 million people who watched Dennis Taylor beat Steve Davis in the 1985 World Championships). If football wanted airtime, it had to provide what the broadcasters and what TV audience wanted. Later TV contracts were therefore heavily biased in favour of live action from the top of the First Division, with Saturday night highlights now the exception rather than the rule. In 1986-87, Match of the Day highlights were screened on Saturdays on just two occasions, while the last day of the season wasn’t covered on any channel as both the BBC and ITV had used up their allocation of live matches and had no interest in providing highlights. The same accent on live action continued when ITV did finally win exclusive rights to the Football League in 1988.

However, in 1992 there was a major change. The first division clubs set up the breakaway Premier League, thereby ending their relationship with the rest of the League. This meant Liverpool and Manchester United no longer had to share airtime and – more importantly – revenue, with clubs such as Scunthorpe and Rochdale. But who was going to cover their matches? The Premier League gave the exclusive live coverage rights to Sky Sports, giving the satellite channel its first real source of credibility and returning audiences. However, aware that taking football away from a huge number of viewers would be unpopular, a highlights deal was also struck. Suddenly terrestrial viewers had to stay up late again.

The rights for Premiership highlights were won by the BBC, which meant that, after a break of six years, Match of the Day was now a regular Saturday night fixture again. And despite Sky getting first dibs on the most attractive matches each weekend, this was probably a better deal than the BBC had a decade previously. They were able to take their pick from the rest of the fixture list, could show the big teams week-in, week-out and, because all Premiership matches now had camera crews present, enjoy much more flexibility, with the opportunity to show all the goals and important action. Of course, the cost of the rights was umpteen times higher than the couple of thousand pounds a show they’d paid in the 1970s.

One major complaint during this incarnation of Match of the Day centred round the programme’s scheduling – the irremovable fixtures earlier in the evening meant it often went out quite late, and by 1997 it had shuffled back to a regular start time of 10.50pm, finishing around midnight. Presenter Desmond Lynam expressed his displeasure by ending an episode with a pointed “good morning”. In 1998, the BBC bolted the show to a regular slot of 10.30pm – earlier, but not early enough for some. A further headache at the time for the BBC was what seemed to be a diminishment of their sporting portfolio, with both ITV and Sky sniffing around many premium events. This high-profile poaching became most apparent in 1999 when Des Lynam jumped ship to ITV, saying the BBC no longer had enough live action for him to host. His deputy, Gary Lineker, stepped up to the MOTD hotseat, but the following year the unthinkable happened – ITV won the rights to Premiership highlights.

The rights didn’t change hands until the 2001-02 season, so journalists spent most of the preceding season speculating what ITV would do with the coverage. The thinking was that, at a cost of £60 million a season for three seasons – the largest amount of money ever lavished on highlights – ITV could not afford to screen their coverage in as late a slot as MOTD had endured. This seemed to be confirmed in October 2000 by an unlikely source – Chris Evans, who announced on his Virgin Radio breakfast show that he had met with ITV’s Head of Sport Brian Barwick, who had revealed his plans. Evans claimed the series would go under the name of ATG, standing for “All The Goals,” and be screened in peak-time with a post-pub repeat. Evans also claimed “the BBC will regret having the story of the day and leaving it until after eleven o’clock”. Unfortunately, he said this on a day ITV’s Champions League highlights programme began at 11.30pm.

Nearer the time, it became apparent that Evans had got (some of) his facts right. The programme would go under the less terrible name of The Premiership but would be screened twice on a Saturday night – the first showing at 7pm, the second “around 11pm”. All involved were suitably bullish about the new show’s success, brushing off suggestions that it would alienate much of the traditional ITV Saturday night audience. Director of Programmes, David Liddiment heralded it as “a once-in-a-lifetime opportunity to change the shape of Saturday evening viewing. The assumption that football is a male preserve is not borne out by the facts – for many women and children it is the national game.” Des Lynam, back on the Saturday shift, was equally excited – “I campaigned for this early start in the past. I think it’s part of the entertainment schedule and what’s more entertaining than the Premiership?”

It was also emphasised how different the new show would be, with major technical innovations and a fresh approach to coverage, rather than the staid and traditional MOTD look. U2’s ‘Beautiful Day’ was selected as the theme tune and a major sponsorship deal was signed with Coca-Cola. Unlike the BBC’s rotating pundits, too, Terry Venables and Ally McCoist – both poached from the corporation – would analyse the action each week. Despite all these innovations, though, Head of Sport Brian Barwick, himself a former MOTD editor, pointed out “The key is to take what we did with Match of the Day and add to it. The best stuff will still be the action, but at a time when we’re not half asleep.”

After all the speculation, The Premiership began on Saturday 18 August 2001. The programme was indeed screened at 7pm, though its 75-minute slot was the same length of the commercial-free MOTD. The second outing, extended to ninety minutes with longer highlights and a look ahead to the morning papers, went out at 11.45pm – not quite “around 11pm,” and with a repeat of TV’s Naughtiest Blunders pushing it back. Still, it looked impressive, with a glossy title sequence and endless montages, and numerous new ideas. Des started the first show by looking at his watch and announcing that 7pm was “better for you, better for all of us”.

One match was blessed with a visit from Andy Townsend’s “Tactics Truck,” where the former Ireland international was joined by one of the participants and interrogated them about their performance, using all the replays the OB vehicle could provide. This was a straight steal from Channel Four’s innovative cricket coverage where analysts reviewed proceedings during breaks in play, but while it worked as part of live coverage, it seemed less essential as part of a highlights package. It wasn’t helped by the fact that Townsend was an acquired taste, and his grilling of Middlesbrough’s luckless Ugo Ehiogu, fresh from being sent off in a 4-0 defeat, in the first show was more embarrassing than enlightening.

Terry Venables got his hands on ProZone, a much-hyped computer program apparently used in all the top clubs to help with training, but which translated into a dull set of diagrams on screen. Ally McCoist selected his top three goals of the day to much banter from Des and Terry, managers were interviewed at half-time as well as full-time, the reporters were sent out to meet the managers and players off the pitch (which inevitably meant Fabrizio Ravanelli being followed to an Italian restaurant, with highlights of his match interspersed with shots of the proprietor watching), and, apparently an idea of Lynam’s, the biggest match was kept to the end of the show to increase the excitement. It was certainly a packed programme – which meant that only 28 minutes of the first episode was actually spent showing football.

Next Monday: I mean who on earth thought that was a good idea?