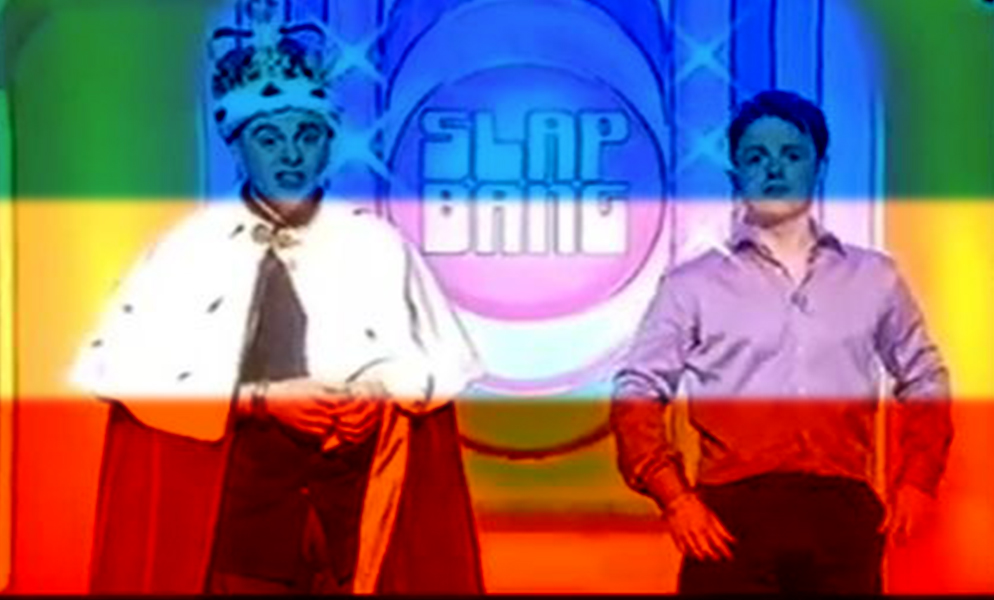 One show that managed to complete its run on Saturday evenings was a new vehicle for now ITV-contracted Brian Conley. Like his previous series, it was titled The Brian Conley Show, but rather than the sketches and stand-up of before, it was focussed on chat and all-round entertainment, along the same lines as Des O’Connor Tonight. Of course, the interviews were heavily skewed towards comedy, but it was still something of a departure for the star. Perhaps the most notable aspect was that Conley’s house band was led by Steve Brown, and the banter between Brown and Conley at times resembled that seen in one of Brown’s previous jobs – playing Glen Ponder in Knowing Me, Knowing You with Alan Partridge. The series failed to sparkle quite as much as ITV might have liked, and by the end of its run, was shunted from 9pm to after 10pm by the end of the run, repeats of It’ll Be Alright on the Night filling the gap.

“Where it goes now, it starts to get a bit scary,” said Brian Conley in a 2004 interview.  “(ITV is) very much focusing on how many people are watching these things you know and the advertisers have a very big say in it.  And what amazes me is that all these figures are all to do with 200 black boxes that are strapped to the back of a cross-section of the nation.  So they’ve got these 200 black boxes and that’s how they determine whether 12½ million people are watching it.”

Conley’s first show suffered from its placing opposite the year’s biggest new Saturday night drama. Reeves and Mortimer’s previous excursion into peak time television, Families at War, had been a huge flop. The original Randall and Hopkirk (Deceased), detailing the adventures of the hapless detective Jeff Randall and his late sidekick Marty, had been a hugely popular slice of hokum, fondly remembered by a generation. With fantasy drama such as Bugs and Jonathan Creek proving popular, it seemed the optimum time to sanction a revival, with Fast Show mastermind Charlie Higson on writing and producing duties. This new series was a hugely ambitious and expensive production, with some of the most advanced special effects ever seen on television, and so was much-hyped at the time. Thankfully, it also proved to be very enjoyable, paying tribute to the original while still feeling new and fresh, and the first instalment pulled in over 10 million viewers – an increasingly rare occurrence. However by the end of the series ratings had dipped to just over half this number.

Of course, there were still plenty of veterans around on Saturday night, and one of the most senior was back in the autumn of 2000. Parkinson had been part of the world-beating BBC1 line-up of the 1970s, a schedule of programmes still cited whenever anyone discussed just what had gone wrong with Saturday night TV. It had ended in 1982 and Parky had spent 16years ligging around a variety of formats, some vaguely successful, others plain awful. Eventually, after a series of repeated interviews received much critical acclaim, he was enticed back into the chat show chair on BBC1 in 1998 – though this time on a Friday night. If it was considered something of a risk, it paid off, and more series followed. However in October 2000, the BBC1 schedules were transformed with the moving of the Nine O’clock News to ten, displacing Parkinson. Hence it moved back to the classic Saturday night slot, albeit at 9pm rather than the later timing of the golden years, and his ability to entice big names – David Beckham appeared in the second week of the Saturday shows – made it a decent-sized draw.

But what of David Young’s development team? After Friends Like These had been a hit, their second attempt at a Saturday night banker was somewhat less successful – ironically, partly because it seemed so derivative of Ant and Dec’s series. Your Kids Are In Charge was a twist of the format which brought an extended family together and placed the adults at the behest of the children, who would select one of them each time to participate in a Friends Like These-style challenge. Some interest came from the fact that Anthea Turner would be hosting alongside her sister Wendy for the first time, but the show was lacklustre. While Friends Like These had been careful to disguise the small budget, Your Kids Are In Charge looked cheap from the start, with some of the challenges consisting of nothing more than board games. The restrictions around working with small children were also evident – although the choice was supposed to be spontaneous, every time the kids revealed the name of the adult, viewers could clearly see where the production team had written their name in advance.

A better variation on the theme followed in early 2001. Dog Eat Dog was very much along the same lines as the by-now-familiar format – five contestants, five studio challenges involving physical and mental agility. The twist this time was that the contestants had been sent on an outdoor pursuits weekend and were supposed to have worked out their fellow competitors’ strengths and weaknesses. They then had to nominate someone to carry out each task in the hope they would lose and give their nominees the points. This continued until there was only one left, and there was a cash prize on offer in the final. But again, this depended on them nominating each of the losers to answer questions, and if they got them right, they would share the money between them and the winner would leave with nothing. Capably hosted by Ulrika Jonsson, Dog Eat Dog made for amiable if repetitive viewing. The element of nastiness and backstabbing had been purloined from the entertainment department’s biggest hit, the daytime smash The Weakest Link, and the success of that rubbed off on this similar vehicle.

By this time, though, the department’s flagship series, Friends Like These, had a new host. At the end of 2000, Ant and Dec were offered exclusive deals with both the BBC and ITV – both had enjoyed success with the duo and both saw them as the sort of people they needed on a Saturday night. This was emphasised when SMTV Live won the viewers’ vote at the 2000 British Comedy Awards – a major honour for a children’s show. Eventually, the duo decided their future lay at ITV. In the opposite direction came Ian Wright, the former Arsenal footballer whose ebullient personality had made him an obvious draw for TV producers. After a number of series on ITV – including Saturday night filler Guinness World Records – he was personally signed to the corporation by incoming BBC1 controller Lorraine Heggessey.

His first series of Friends Like These ended up going head to head with the Saturday night ITV debut for Ant and Dec. Their new vehicle, starting in May 2001, was considered very much to be a continuation of SMTV, and was produced by the same production team at Blaze Television. Slap Bang, so called because it was ‘slap bang’ in the middle of the weekend, was a miscellany of features, much like Don’t Forget Your Toothbrush. Some of these were taken wholesale from Saturday mornings, including the popular ‘Challenge Ant’ – only this time with pensioners rather than children asking the questions – while the pun-laden sitcom ‘Beers’ was simply a relocation of the ‘Chums’ segment. The rest of the show was given over to comedy sketches, audience participation and phone-in games. If it resembled anything, it was probably The Late Late Breakfast Show.

Sadly, this was the unpopular first series of The Late Late Breakfast Show. Slap Bang was a huge failure, and while the unspectacular viewing figures for the first episode could have been explained away thanks to it screening on the hottest day of the year, the poor performance continued for the rest of the run, and when screened opposite the new Wright-helmed Friends Like These, their new show was embarrassingly thrashed by their old one. The final episode ended up being screened at 5.35pm, before a repeat of Catchphrase – not the sort of slot that ITV’s big hopes were supposed to be occupying.

So what went wrong with Slap Bang? The most obvious flaw was that, despite Ant and Dec’s huge popularity, they still needed a strong format, which they didn’t get here. Most of the items had little purpose, simply petering out or based on one joke flogged to unbearable levels. Even the concepts that had worked well on Saturday morning failed to shine – ‘Challenge Ant’ was better done on SMTV, while ‘Beers’ didn’t have the charm of ‘Chums’, possibly because what had started as messing about was now ‘proper’ light entertainment, and the outrageous puns and jokes seemed juvenile in peak time. Despite big name guests, such as Helen Mirren and Ricky Tomlinson, there was little reason to watch the show because, in essence, nothing happened. It’s also worth considering that, while SMTV had been popular in terms of Saturday mornings, the viewing figures were small by Saturday evening standards, and so there was a whole sector of the audience who didn’t know enough about Ant and Dec and their show to buy into their personalities and their features.

Slap Bang’s failure was a major blow for ITV, who had staked a lot on Ant and Dec’s ability to engage an audience that, despite recent attempts, was still watching very little Saturday night TV. It also failed to establish a new, reliable ratings source. That meant that a major and controversial addition to the Saturday line-up come August was going to have its work cut out …