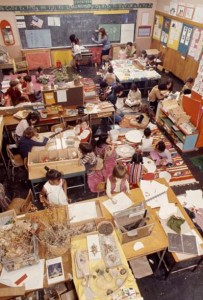 The late 1960s were a time of cultural revolution in the classroom. The Nuffield Foundation, a group of academic liberals, took a look at the trad primary school setup – serried ranks of desks, big fat squeaky blackboard, largely pink globe, those long twiddly poles for opening the windows – and saw that it was bad.

Their remedy for this authoritarian stuffiness was to strip the place out and start again in a friendly way more suited to “active learning”. So out went the front-facing desks and in came clumps of tables for “group work”, little corrugated card partitions, nice brown rugs, and an almost pathological desire to free up as much “floorspace” as possible. The teacher’s desk was set at a jaunty angle. Comfy chairs cropped up in quiet corners. Formerly grey and peeling walls were plastered with cheery drawings and graphs on bits of stapled sugar paper. Oh, and don’t forget the obligatory chunky, sans serif alphabet running round the top of the wall.

Details mattered. Every bit of furniture fell under scrutiny. (“Does the teacher’s table have to be so big?”) Initially, conversions from the old “sit and write” regime to the brave new world of “topic work” were very much make do and mend: nice flat surfaces were made by sticking corks under the flaps of the old sloping desks, or by bunging an old blackboard over the lot (covered, of course, in Fablon). Later on, they were replaced by those grey tables with the rounded corners and the tubular metal legs which never quite fitted together properly. With penmanship out and plasticine in, the transformation was complete.

Of course, the teachers themselves were a different matter. The new breed of caring NUT candidates, all floaty skirts and kind looks, flourished in these new informal digs. The more old fashioned schoolmasters, rudely disinterred from their trusty old “point and shout” teaching methods, forced to wade through impenetrable reams of course modules and skillsets, and finding themselves all at sea with the necessary colour coded stickering systems, were less enthusiastic. Some of them smelt a Marxist rat among the pedagogic folderol, and stubbornly dug in their wrote-learning heels, amping up the crotchety disciplinarian shtick to almost cartoon levels in reactionary revolt. Stick that up your “circle time”, Harold Wilson!