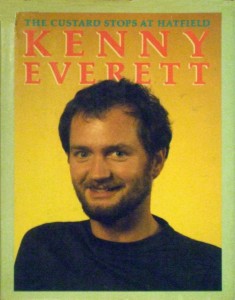 Comedians’ autobiographies are, as a rule, to be approached with a critical ten foot pole, if not a censorious mop and bucket. Quite apart from the pitfalls of disillusionment and boredom that so often follow the dread phrase “and this… is me”, every page must be turned with trepidation, lest the next one’s contents unwittingly reveal your favourite gag merchant as a jumped up, egotistical nitwit whose best lines, on the evidence of his memoirs, were clearly written by the long-suffering backroom boys who barely get a mention halfway down page 118. Only a handful of comics manage to avoid at least one of these mortal sins, and none dodge the lot with the carefree aplomb of Kenny Everett.

In memoir as in life, Ken starts as he means to go on. After the obligatory arsing about with comedy introductions, you get a soup-to-early-’80s-nuts romp through Cuddly Ken’s life and career, from being tricked onto drinking his big sister’s wee put of a Lucozade bottle to a climactic chat in Kensington’s Tratoo restaurant with Barry Cryer and Ray Cameron about Video Show minutiae, including the Beeb’s crackdown on Cupid Stunt (and her subsequent redubbing as Mary Hinge).

It’s written in exactly the way you’d expect: a frothily faithful prose transcription of Ken’s rambling, sing-song conversational mode. Names are unashamedly dropped and products are unashamedly placed. The pirate radio days in particular provide rich anecdotal pickings. Tony Blackburn swallows a mouthful of weevils and saves a drugged-up Kens life aboard Radio London. Ed Stewart muses on the Fabs’ Yesterday to our sexually innocent hero: “doesn’t it just make you want to orgasm?” On dry land, an increasingly canny Everett gives the censorious Beeb the media runaround not once, but twice, and fills us in on the furious temper of Food and Drink‘s cuddly crafty chef Michael Barry (Bukht as was) in his capacity as controller of Capital Radio. And to give the story even more of a kaleidoscopic sketch show feel, each chapter is illustrated by a different cartoonist, among them the redoubtable Martin Honeysett.

The accent’s on the larks, but there’s more to it than that. Adventures with acid, coke and the malevolent sleeping pill Mandrax are honestly recounted, with neither sympathy courted nor born-again puritanism pushed. A suicide attempt precipitated by an overdose of mandies is, if anything, made all the more affecting by being recounted in the same breezy, matter-of-fact style as the anecdote of the exploding Video Show violin. The only reason a reader of this book wouldn’t instantly warm to its author is that they’ve most likely already warmed to him years before. Self revelation is in, but self serving and self indulgence are shown the door from page one. Homosexuality and Ev’s, er, singular marriage to Lee Middleton are the only subjects to be nervously skirted around, but even so, this is still an unusually ingenuous book in an age when the confessional, gut-spilling showbiz autobiography was still the exception, not the rule.

What could easily have turned into a shapeless junket of wacky frippery becomes instead the perfect comic memoir: an ideal balance of personal history, random digressions (a musing on Britain’s regional differences vis-a-vis choice of pudding sauce gives rise to the book’s title), silly gags and insights into the nuts and boots of TV and radio broadcasting. Kenny’s a chatty, flirty and pretty much entirely reliable narrator, with only one or two exceptions: it’d be great to think Lennon’s lyrics to I Am the Walrus were inspired by a shared LSD trip with Ev on Weybridge golf course, but perhaps some things are just too good to be true.