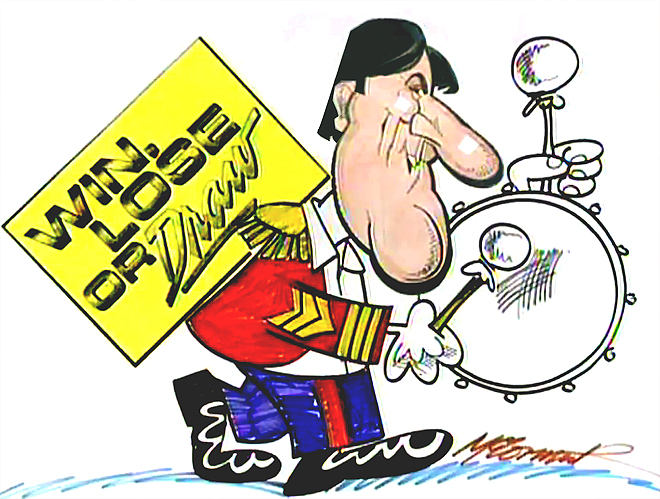 “Hello and welcome to the quick draw game that everyone can play!” All thanks go to Nick Gates at the excellent Bother’s Bar website (nice logo, by the way, Nick) for drawing our attention to the fact that good ol’ STV have put their entire Danny Baker/Bob Mills-helmed archive of top 1990s daytime quick-on-the-draw quiz WIN, LOSE OR DRAW, here, on YouTube. 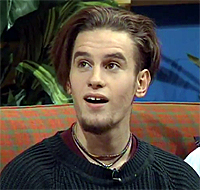 We, however, want to draw (heh!) your attention to one particular episode from 1996. The reason? Cos TVC was in the studio audience at the time! One of the contestants, Andrew-Petrie-from-London, was a friend of a friend, so we agreed to schlep along to the Cowcaddens studio to watch the episode being recorded. At the left is a picture of the none-more-studenty ‘Peach’ (as he was known to chums) on the show. We well remember at the time, all the production team cooing over his opponent pleb, Helen-from-Belfast, and speculating that she could go on to a career in TV… Any update on that, anyone?

TVC’s main memories of this day in 1996 are as follows:

1) An over attentive warm-up woman who’d jump on the audience asking, “Who remembers old sweeties?” during every recording break.

2) STV posting guards on the exits, so you couldn’t sneak out during the loo-break between episodes (they filmed two back-to-back).

3) A member of the audience being pinned down on Bob’s rug when he broke on to set to try and get Anna Walker (of all people) to sign something.

4) Accidentally snubbing Saracen in the STV corridors afterwards. We were lingering around, waiting for Peach to emerge, and the Gladiator obviously thought we were loitering for his signature. Being 14 years younger than we are now, and lacking a general sense of sophistication, TVC simply turned its back on the erstwhile Mike Lewis.

Anyway, here’s said episode. And if you’ve been in the studio audience for a quiz show that’s now on YouTube, do tell us all about it…
[poll id=”2″]