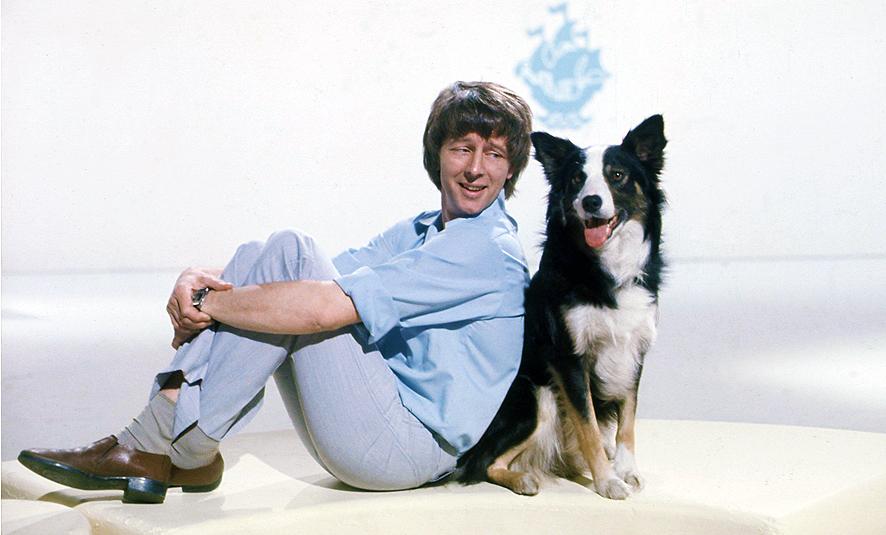 John Noakes’ route into telly was somewhat curious and owed a lot to Biddy Baxter’s unorthodox way of hiring talent. Looking for another male host on Blue Peter to help cut down Chris Trace’s workload (and also to avoid relying solely on an increasingly fed-up presenter), Biddy spotted a picture of him in her local paper the Leicester Mercury when he was appearing in a play, thought he looked suitably fresh-faced (despite being 31 at the time) and, after reading he had a wife and two year old son living in London, thought he’d be fed up with life on the road and far happier with a steady job in the capital, so she invited him in for a chat. Suitably impressed by his unaffected style, he was engaged to make his debut on the show on 30th December 1965 – after Biddy had decided he couldn’t appear in the lead-up to Christmas as that was “a psychologically bad time to increase the family circle”.

John made a shaky start, being somewhat overwhelmed with the mechanics of live television and consistently forgetting his lines, to the extent that within six months they were minded to let him go and didn’t invite him on the expedition. However, there was something natural about him that was incredibly endearing, and while he never got any better at learning the words (once having to ask Ronnie Barker his name because he’d forgotten it, with Barker helpfully confirming “I’m Ronnie Corbett”), his natural curiosity and respect for those skilled in a trade meant he was an engaging presence on screen and great at making action films, which were  improved still further by his frantic commentary. Usually he’d achieve everything that was asked of him, but his attempt to climb the mast of HMS Ganges, as seen below, was a rare failure. Not that it mattered, as Biddy thought it was wonderful for viewers to see their hero John didn’t always make it, but tried his best.

What also helped John become such a good presenter was a wonderful straightman in Pete Purves, the pair sparking off each other beautifully in a series of daft films (although one involving bunny girls was so self-indulgent they were told never to do anything like that again), and the arrival of a canine sidekick. John’s first chum was Patch, and he was devastated when he died in 1971, to the extent he couldn’t even rehearse the announcement of his death without bursting into tears, though he just about held it together on air. A few months later came Shep, and the full episode that’s just been uploaded to YouTube, nicked from the UK Gold repeats in the 1990s, includes the announcement of his name, alongside a top it-was-a-different-age feature as John and Pete demonstrate a nail gun.

But it was always out and about where John excelled. He wasn’t always massively engaged with the tedious process of making television, though, with Janet Ellis in the papers this week saying apparently he didn’t bother reading the script until he arrived in the studio, while dubbing sessions could be a bit fraught, and he once got so fed up with the constant retakes he threw a whole cup of a coffee over the edit suite, and Biddy made him clean it up all by himself. But when he was out of the studio and getting his hands dirty, he was in his element. He later suggested that his derring-do came about because he had “no imagination” and therefore simply didn’t think about what might happen if things went wrong.

But it wasn’t all jumping out of aeroplanes and riding motorbikes, John had a cultured, sensitive side to him as well. Indeed he later said he regretted giving up acting and wished he’d carried on, while he was also a talented artist and showcased his talents for creating glass art on the programme. And one of his best moments came in 1977 when he visited the set of Porridge and interviewed his old mate Ronnie Corb… er, Barker.

All this excitement came at a cost, however, and he later complained about how hard he had to work – especially when he started combining Blue Peter with his spin-off show Go With Noakes, where he’d get out and about around the UK and meet fascinating people with a story to tell. One of his favourite films saw him play rugby league for Castleford, and it’s worth pointing out that one of the most unusual things about him with his Northern accent, which you almost never got on kids’ telly in those days. You certainly didn’t on Magpie.

Eventually the work took its toll and he decided to leave Blue Peter in 1978, at the age of 44, though he stayed in the fold with Go With Noakes for a few more years. But sadly it seemed a slightly acrimonious departure, getting only the briefest of mentions in that year’s Blue Peter book. The problem came when the Beeb let him keep Shep, based on the proviso he didn’t do adverts with the dog, because they thought it would be confusing for the audience. Sadly John didn’t agree with this, so Shep stayed in the Beeb’s care, while he got another canine called Skip and did commercials anyway.

After 12 and a half years of hard slog, John decided to more or less jack in the telly and start sailing around the world with his wife, but a shipwreck in 1983 put paid to that. While the boat was being repaired, he made something of a comeback to our screens, presenting kids show The Dinosaur Trail on ITV, and that summer joining the nascent TV-am, helming its Saturday morning show for several months alongside fellow kids TV refugee Toni Arthur. Excitingly there’s quite a lot of one morning on YouTube, where he’s hardly very slick but brings plenty of personality to proceedings and did a decent enough job given what a shambles the station was in at the time. After that he set off on the high seas again, but by the time he got to Majorca, they’d gone off the idea of sailing around the world, and retired there instead.

Aside from his famous appearance on Fax in the late 1980s, that was about it from Noakes on TV, until in the early 1990s Blue Peter nostalgia exploded. That meant a return for all the anniversaries, and in January 2000, alongside Val and Pete, he was back to reopen the time capsules he’d buried back in 1971. Sadly he seemed a bit grumpy throughout, and around that time he also made a point of talking down his Blue Peter experience, saying he regretted doing it for so long, if not at all, and he was badly paid and treated throughout, which was a bit of a shame. But as Richard Marson points out, if it was all an act, as Noakes said it was, it was the greatest acting job in history, and let’s hope that he knew how special the memories he created were for generations of children.