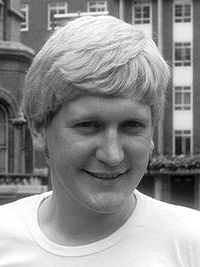 The following appeared in our Creamguide mail-out just a few weeks ago. We represent it now in light of the extremely sad news Mike Smith’s death. So here’s an opportunity to look at some of the highlights of his career in TV. Sure, he did loads on radio too – we’ll need to get to that. In the meantime…

CBTV (Thames 1982)
Yes, several hundred words on Mike Smith. Don’t worry, there’s loads of funny clips coming up. Smitty, as we always called him, started out on the radio and at the start of the eighties was getting plenty of attention as Capital’s breakfast DJ. In this capacity he reported on the first London Marathon and met his wife-to-be Sarah Greene, and indeed among his earliest TV appearances were various uncredited anonymous appearances on Blue Peter as Saz’s partner as she learned to dive. But it was on Thames’ post-Magpie Blue Peter baiter where Mike got his first regular telly work and here he is up there inviting a bunch of kids to interrogate Toyah. Sadly for Jim Sweeney an awkward camera angle about three minutes in rather spoils the illusion of the chute he “slides” down. In fact since we’ll probably never have the opportunity to talk about CBTV again we’ve got some other clips, including the rather odd theme tune, and some later stuff, post-Smitty. And much of it is far more middle class than Blue Peter, natch.

By the end of 1982 Mike had been poached by Radio 1, a station he’d previously worked at as jingle maker and helper. He was immediately included on the Pops presenting rota, famously introducing the debut of Wham! on his first show, which doesn’t appear to be online anymore but his horrendous jumper does still exist at the above link. Mike continued to present the Pops for six years and even had the honour of still fronting it during a two year spell from 1984 he wasn’t on Radio 1.

Mike was part of the original team bringing us breakfast telly, originally as pop correspondent but, within a few months, being promoted to one of the main presenters, in the words of Frank Bough “proving DJs can be cerebral as well as noisy”. Mike stayed on the show for four years before going back to Radio 1 and competing with it, but he made so little impact we can’t find a single clip of him doing it on the internet, and his most memorable moment came when he tried to get a bit more comfortable on the red sofa and ended up getting stuck in it.

One of umpteen attempts to create a TV show based around entertainment news, Show Business went out on Friday evenings for a couple of months in 1983 and Mike was the anchorman – getting a writing credit and everything, though we don’t know if he was responsible for the cock-up he has to do an apology for up there. Dullards may note that the Late Late Breakfast Show trailer after it is clearly filmed on a redressed Top of the Pops set, thanks to a strike. Eighteen months later, with the requirement to find fillers for the newly vacated 5.35 slot, it was back with a new name and Mike still in charge, though it still didn’t catch on and sadly the clip we have doesn’t feature the theme tune, which was the ace Garden Party by Mezzoforte.

Although The Late Late Breakfast Show had recovered from its atrocious start, it still wasn’t doing much, so a new co-presenter was sought. Noel had been something of a mentor to Mike in his early career so he seemed the logical choice and it turned out to be pretty inspired, the pair’s banter becoming a much anticipated part of the show. As we’ve mentioned on TV Cream before, Mike’s role on the show was to spend a dank Saturday night in somewhere like Bealieu Motor Museum watching a punter drive a Honda Melody through a burning hoop, and for a while it was hugely successful before it all ended in unpleasant circumstances, Mike falling out with Noel over it due to the internal ructions at the Beeb.

As we know, the responsibility of televising Live Aid fell to the Whistle Test team, a role they were woefully underequipped for, and Janice Long and Mike were the only representatives from the other side of BBC pop involved in the broadcast. Mike’s role didn’t involve him going to Wembley, though, but that equally iconic location, er, Legends nightclub. He anchored the late shift until 4am, mixing performances from Philadelphia with clips from earlier in the day and interviews with whoever turned up, and here’s the last hour or so of it, happily editing all the music out.

A rather thankless task for Mike here, replacing the great Johnny Ball on this kids quiz, but he had a decent go at it. Basically it’s What’s My Line for kids – and this is when What’s My Line was still on the telly, so it couldn’t even pretend to be original – but here’s some nice clips with Pip Schofield showing up to jolly things along and the Grange Hill cast as resident panellists, who were a bit more cheerful than Gilbert Harding or George Gale.

A big show of the kind you don’t seem to get on telly anymore, this ninety minute extravaganza aimed to increase AIDS awareness as part of a week of programming on all channels on the subject. Now Radio 1 breakfast DJ, Mike was very much the voice of youth so drafted in to anchor proceedings, while comic relief came from, among others, Rik Mayall, and we vividly remember the sketch linked to above because a juvenile Creamguide was so embarrassed at the sex talk we actually asked our parents to turn it off.

Two bog-standard light entertainment formats here, where Mike did his usual professional job but couldn’t rescue their rather uninspired concepts. Despite being officially billed as Seaside Special 87, there was nothing particularly dynamic about the Jersey-based variety show, following a format that harked back to the earliest days of television, especially when the big innovation was a revival of Beat The Clock. The Funny Side borrowed from a slightly more up-to-date format, one of dozens of shows following in the slipstream of Game For A Laugh mixing studio games and guests to little effect, but sadly all we can recall is the Herbie Hancock-inspired theme tune.

If Danny Baker’s Pets Win Prizes is the thing we’d most like to see on YouTube, this is a close second. Trick or Treat was a Saturday night quiz which, on paper, looked pretty conventional, but on screen certainly wasn’t, as Mike was joined by Julian Clary as co-host. Each week Clary would flounce around the audience until he was “strangely drawn” to a punter who he’d invite to play a game with Mike which was almost always fixed to make them look stupid, and then win a prize that might be genuinely good but just as likely be totally worthless. You could argue this was an attempt to subvert the conventions of light entertainment years before Shooting Stars but it was a bit of an awkward mix that didn’t really gel and just baffled and bored the audience. Love to see it again, though.

Of all the shows he’s done, Mike reckons this is the worst. After the success of Hospital Watch, seemingly the idea was you could stick a camera anywhere and it’d be interesting, so for a whole week Mike was at York station, crossing to reporters up and down the East Coast Main Line. No doubt the whole thing is fascinating in a proper edited documentary but live for an hour a day next to nothing happened, Mike remembering the most interesting thing of the entire week being a trolley blowing onto a line, and he was thoroughly relieved when it was all over. Happily, though, you can relive the whole week online!

This series has its roots in A Question of Sport, which was then repurposed in 1988 to become A Question of Entertainment, which, despite the presence of Doddy and Larry Grayson, never really caught on. Not wishing to write the whole thing off, though, another revamp saw all traces of Pringle removed and a new name. The first few series of this show were hugely enlivened by the presence of Cuddly Kenny Everett as team captain alongside Gloria Hunniford, though only a fraction of that era exists online. What we’ve got more of is the show from 1992 onwards where there were no regular captains, while the horrible synth theme was replaced by a horrible sax-driven theme. Eventually it ran to over a hundred shows, though it’s a fair bet only Mike remembers much about it.

Mike was very much the Beeb’s golden boy in the eighties but he was one of the first presenters to make the leap to the brand new frontier of satellite television, Mike throwing his lot in with the classy, professional BSB. Mike’s shows were on Now, the barely watched “Channel for Living”, and according to the ads in the Radio Times (as nobody watched the actual shows) met people with unusual hobbies and reviewed the week’s news. In addition Mike also fronted the very exciting glossy promo video you can see up there, striding around Marco Polo House (which has just been demolished, fact fans) while parroting dodgy statistics about “the fed-up factor”.

The nineties weren’t so kind to Mike, becoming perhaps more famous for stuff he did off camera, including complaining about Cheggers turning up at his house for The Big Breakfast, joining and then leaving Hearts of Gold with some harsh words for Esther Rantzen and applying to be Controller of BBC1. On screen there were a few notable appearances, including his first official co-starring credits with his wife. You know about Ghostwatch and we think he was quite good in it, while The Exchange was another attempt at an adult Swap Shop, Mike here promoting the Bad Influence-style datablast coming up. But by the end of the decade Mike decided to jack in the telly and concentrate on his business interests, in which he’s had huge success and still contributes to many top TV shows via the aerial photography company he runs which is responsible for virtually everything you see filmed from a helicopter on TV. So well done to him.