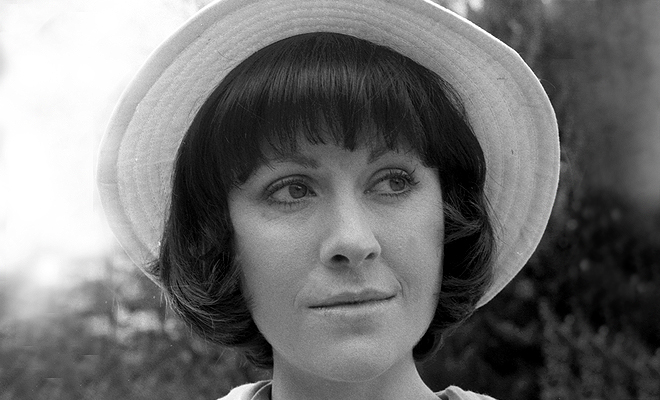 TV Cream is saddened and not a little shocked to learn of the death of Elisabeth Sladen – presenter of Stepping Stones, the best-ever Doctor Who companion and, in person, seemingly ageless. But it was not to be.

We were lucky to meet and interview Elisabeth a couple of times over the years. Here are some favourite bits from our chats…

On her brief time in Coronation Street

“I went for an interview – ‘What? Barmaid? Me? Oh no!’ I couldn’t believe I got it. Six episodes. It was at a time when the cast were treated like royalty. I mean, you could not believe the silver service. They would bring, at 3pm, afternoon tea to them on trolleys. I was actually told not to sit in Uncle Albert’s chair. Christ! I’d been working in rep. Ha ha! Oh yes. And they were all on contracts forever. Pat Phoenix was the Queen Bee and she had just married… oh God, what was his name? And she was so proprietorial, she’d swan in in her mink coat.”

On how Doctor Who affected her career

“Who knows? Who knows? I know a lot of things I got offered afterwards were very different to what I got offered before, in the way of, scripts for a little girl all the time. But having said that, I did feel I still did stuff that I thought was stretching for me. I really am honestly, genuinely so pleased to be involved with such an iconic programme. Do you know? It’s no hassle. It’s really…  I’m very pleased to be part of it. Oh, I would defend the programme to anyone.”

On the day she realised Doctor Who would never leave her

“After I’d been to America, because I wouldn’t do conventions here because someone else was playing the assistant – and I did totally walk away. But they were playing the videos in America – they had recorders before we did – so, you would be … they would show scene-by-scene and you would be quizzed. All of sudden, the videos were out here. It was around that time, and then Jon and I, at the beginning of the 1990s, did the radios together and he said, ‘You idiot Lizzy, you’ve got to get out and promote these!’. And that’s when I just started to think, ‘Well, yes. It’s not going to make any difference now I don’t think’. So that was the kind of turnaround.”

“Oh my lord! With Keith Baron. It was great fun, I loved doing it. I went up to Yorkshire to do that. We had to wear our own clothes, they had no budget. So I got a bed jacket, a second-hand Oxfam thing, and I thought, ‘They’ll have to buy me stuff now, it looks so awful’. They made me wear it [laughs]. I had to wear it!”

On returning to Doctor Who and working with David Tennant

“Well, I spied him at the read through and he spied me. And we circled a bit, and I thought, ‘Well, how ridiculous’. So I said hello, and I got the biggest hug of my life. The first day on the set, you think, ‘God!’ We were shooting one of the crucial scenes, and we’d just done some running together and I don’t know if it’s in the programme, but it’s a long shot of David and I, and, you know, the corridors were much longer than we had [on the old show] and we just seemed to run forever. And there was a round of applause, it was almost iconic. ‘It’ll be on the previews’, and it wasn’t! It wasn’t at all! And I have a feeling they might have cut me up to my waist looking puffed, but there should be a wonderful two-shot of David and I running forever, and I hope it’s still in. And I just thought, when we came to do the scene, ‘Oh, that’s what the Doctor looks like now, he’s regenerated’. You just take that leap.”

On the essence of The Sarah Jane Adventures and Doctor Who

“I never think of this as science fiction and I never thought of Doctor Who as science fiction. It was all about relationships. How you care for someone else and if you do care that much you don’t mind how stupid it makes you look – you go for it.”

“Oh no, that’s lovely! I love that. Because there’s an element where she still doesn’t want to get that close, and when she does, she kind of doesn’t handle it all so well. I mean she’s just learning to loosen up, which I quite like. As you get older you learn to.”

On using Doctor Who’s past in modern stories

“If you’ve got a past life, use it! Don’t ignore it. Because everything is ammunition. I claw back! I relish that I’ve got a past. The kids [her co-stars on The Sarah Jane Adventures] will come and say, ‘What’s that line about?’ And I’ll say, ‘Well, that’s when she was blah blah blah’. ‘Ah, I see!’ How fortunate are we? How many programmes can do that? It’s set in a reality. It isn’t just a moment like, ‘Oh, we’ll pluck that out of our derrière!’ Please, don’t muck about with it!