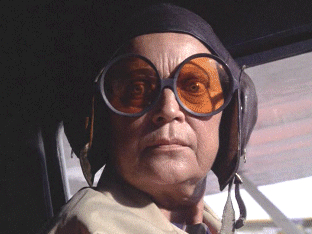 Watching Live and Let Die the other day, we were somewhat taken aback to hear the phrase “holy shit!” tumble from the mouth of one of the supporting characters.

And not just any supporting character: an old woman with oversized goggles, no less.

No doubt the censors deemed her advanced age and agreeable facial furniture persuasive enough to render such wild (by early-70s Bond standards) profanity sweetly comical rather than grossly offensive.

But these circumstances don’t, as far as we’re concerned, make it any less inappropriate.

For like public houses, actual sex and Daniel Craig, swearing doesn’t have a place in James Bond films. And that includes the occasional (and even more jarring) cuss word to slip from the mouth of 007.

Innuendos however – double, single or otherwise – do very much have a place in the canon and their absence (we’re looking at you, Craig) certainly make for a stiff disappointment.

As such, not being the types to pass up an opportunity to rummage through a body of work to see if anything big comes up, we’ve sifted the scripts of every Bond film to date in order to isolate, filter and decontaminate a dozen of the franchise’s most ill-advised expletives.

If you find occasional obscenity as disagreeable as listening to The Beatles without ear muffs, please DO read on.

(Thunderball, 1965)
This ribald squeal of complaint comes from one Count Lippe, who Bond has just contrived to trap inside a sitting steam bath. Yes, we’re only four films into the series and already we’re dealing with cartoonish deaths and comical swearing.

“What the hell do you think you’re doing?” Lippe cries. “Now don’t you worry,” replies our hero, “I’ll tell the chef!”

(The Man with the Golden Gun, 1974)
Another ill-advised “bloody”, but even more out-of-place by virtue of coming from, to paraphrase Roger, A WOMAN.

Bond’s dalliances with the fairer sex are irking his female colleague, ditzy Mary Goodnight, played by Britt Ekland playing herself. When 007 tries to explain away his assignation as “official business”, Britt snaps: “I saw the ‘official business’.” “Goodnight, would I do that to you?” sighs The Man With The Golden Pun. “Yes, you bloody well would!” comes the unnecessarily tart response.

(The Living Daylights, 1987)
Just as disagreeable in a Bond film as a woman swearing is when a posh person follows suit.

(Diamonds are Forever, 1971)
There is no earthly reason why, having refrained from profanity throughout his entire tenure as Bond, Sean Connery decides to call Jill St John a “bitch” while inserting a cassette tape down the back of her pants. Which is probably precisely why he does it. Plus it gives him the chance to continue with the superb line: “Your problems are all behind you now!”

(The Man with the Golden Gun, 1974)
Were Roger Moore to actually call Scaramanga a shit, some sort of micro-atomic implosion, akin to that generated within the Large Hadron Collider, would probably occur bringing an end to life as we know it.

Instead he just alludes to the word, thereby revealing a passing interest in vulgarity that is really somewhat beneath him. This didn’t stop Timothy Dalton boringly reviving the very same line 13 years later in The Living Daylights, telling a bored Russian general: “We have an old saying too, Georgi. And you’re full of it.”

(Licence to Kill, 1989)
One of the things deployed by the Bond producers to leaven the boringness of Dalton on his second mission was to make him the Sweary Bond. Sadly this just made him even less convincing, as there’s only one thing worse than someone being boring, and that’s someone being obscenely boring.

Hence when 007 is captured by some Hong Kong narcotics agents who query his ownership of a gun that is clearly the property of Her Majesty’s Government, Dalton yawns at them to “piss off”.

Elsewhere in this profanity-percolated flop we are treated to Dalton, while dangling over a crushing machine, tediously instructing a woman to “switch the BLOODY machine off”; and morosely ordering those self-same narcotics agents to release him from their chains and “get me out of these BLOODY things!” More from this Sweary Bond later.

(Live and Let Die, 1973)
Utterly unlikable comedy redneck Sheriff JW Pepper spends this film spewing dozens of debatable profanities (“my ass” “your ass” “his ass” etc.) and an extremely suggestive cuss (“What the fuuuuuuu…?”) but there’s one that grates above all else.

The word “bitch” simply doesn’t belong in a Bond film. Heavens, Sean Connery tried it two years earlier and even he didn’t pull it off. The swearing, that is.

5) “Would you please kill those BASTARDS!”

(Tomorrow Never Dies, 1997)
We’re now heading into the stronger stuff. This instruction, delivered by chief baddie Elliot “Not Rupert Murdoch” Carver to his henchman Mr Stamper, is drained of all menace by the insertion of a completely out-of-keeping expletive.

Whatever happened to the likes of a diabolical mastermind telling his accomplice merely to take care of Bond and “see that some harm comes to him”?

(Licence to Kill, 1989)
Oh dear, it’s Sweary Bond again, this time spluttering nauseum in the direction of number one bad guy Mr Sanchez as he levels a gun at the man’s office window.

We think this is the most profane (and boring, lest we forget) 007 has ever been on screen.

Though it’s safe to say he’s far more liberal with his tongue in the original books.

(Live and Let Die, 1973)
Here it is: the phrase that alerted us to the sheer incongruity of obscenity in a Bond film, slipping as it does from the gums of comedy pensioner Mrs Bell as the light aircraft in which she is sitting, with Roger Moore at the controls, heads towards an ever-narrowing pair of hangar doors.

It’s only slightly more abrasive than the bit where a Generic Black Man declares: “What does he think this is? I’ll blow his friggin’ head off!”

(Licence to Kill, 1989)
Bond isn’t the only one to deploy a battery of profanity in this almost-the-worst-ever 007 film. His rival, the aforementioned “bastard”, is also responsible for a cluster of cusses, including this ill-inserted unconvincing tirade.

Along the way he’s joined in the sweary corner by those Hong Kong narcotics agents, who joyously declare Bond to be a “BASTARD!” and which prompts a small cheer from the viewer, one that would be more full-throated were they to brand him a “boring BASTARD!”

(Quantum of Solace, 2008)
The most inappropriate swearing in a Bond film comes not from a villain, or from Bond himself, but from none other than Old Mrs Clutterbritches, the one and only M.

In easily the worst moment in any Bond film ever, in Quantum of Solace Judi Dench is heard to snap “I don’t give a SHIT about the CIA!” To make matters worse, elsewhere she unleashes both a “bloody” and a “bastard”. It’s horrible and out-of-place and just wrong.

What were the producers thinking? Chances are they weren’t. Judi Dench swearing is as unacceptable as Geoffrey Palmer drinking from a beer can. And that’s a fucking fact!

Related Items:Baddies who get the point, Baddies with an inflated opinion of themselves, Heroes being caught with more than their hands up, Heroes who are a bit restless but who get off eventually, Heroes who tell women to "run along now - man-talk", Oriental baddies who - upon being thrown from a great height through a window and landing on a piano - are told to "Play it again San"
Share
Tweet
Share
Share
Email
17 Comments