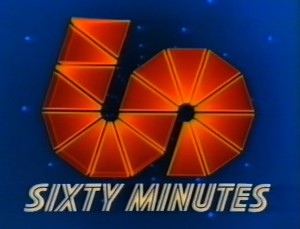 It’s 25 years, give or take a week or two, since current affairs disappeared from BBC teatimes.

Sixty Minutes packed up just before the 1984 Olympics and never returned, axed not because of a scandal, or falling ratings, but for simply being a bloody mess.

Rule one of TV scheduling: never replace a show unless you have something better to put in its place.

Nationwide had tried to go all serious in the early 80s by hiring David Dimbleby as a presenter and making Frank Bough not say hello to viewers.

When it failed, the suits had abandoned the Wide completely and in 1983 put Sixty Minutes in its place: a show twenty times worse whose only saving graces were a catchy theme and a logo that looked like a Rubik’s Snake.

Presenter-in-chief, Desmond Wilcox, brought with him a unique combination of attributes: an ability to look simultaneously sly and discomfited. That all-important cutting-between-the-regions palaver had none of the cake-passing charm of Nationwide.

Then you have the weather starting at something like 6.13pm. “Special correspondents” turned up to “take a sideways look at” the week’s news. These should have been the likes of Richard Stilgoe. Instead they were the likes of Sandi Toksvig. Scotland hated it so much (the whole thing, not just Sandi) they almost refused to show it.

Anyway, at the time of its demise, the press were more concerned – naturally – with the fate of those big name presenters rather than, as one unnamed BBC journo meekly railed, “the virtual abolition of daily national prime time current affairs on BBC1”.

What, say, of great Scot Sally Magnusson? “She was at home preparing for her wedding to film maker Norman Stone. She refused to comment.” What of housewives’ choice Nick Ross? Not even a “no comment”.

And what of forces sweetheart Sarah Kennedy, poached at convoluted contractual expense from LWT involving wrangling that meant she could initially only appear for thirty seconds a time from an entirely separate studio and tell viewers “I hope to be with you very soon”? “Discussions are well in advance for her to do several other things,” reassured the Beeb. Presumably this was what turned out to be The Animals Roadshow.

When the Beeb announced it was axing the show, journalists responded in textbook 1980s fashion: they blacked out that night’s edition of, predictably, Sixty Minutes, thereby rendering the show’s irrelevancies all the more palpable and no doubt prompting the usual waspish letters to Radio Times along the lines of “how much more I enjoyed last Friday’s replacement than BBC-1’s usual fare”.

And in its place, from August 1984, came the Six O’clock News with Lawley and Witchell. “There will be a current affairs element,” said them upstairs.

And there hasn’t been ever since. That tradition for local people with colourful stories to tell coming on the telly while you were doing the pots, one that had endured for almost three decades, was over.

You might say that some kind of spirit lives on in The One Show, but that’s technically on too late (who’s still doing the washing up at 7pm?) and is too full of personalities talking to each other as if they were somehow experts on the day’s news. Nobody on The One Show, above all the presenters, talks to us, the viewers.

In the meantime Sixty Minutes has become one of those ‘non-programmes’: shows that were once shunted slap into the middle of peak-time viewing, became huge national talking points, then were never spoken of again.

“It’s a bad programme, and it’s yours,” the Beeb’s director of TV Brian Wenham once shouted at the current affairs lollygaggers lording it up at Lime Grove. At least it wasn’t ours.