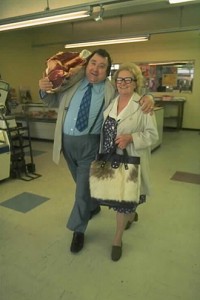 Look, it’s Bernard Manning carrying a steak for his mum. Tell us about your mum, Bernie!

“My mother? She wouldn’t hurt a fly. Would not hurt a fly. Oh no. She just left it in the soup and carried on eating.”

Stars and their kin. On the face of it there seems to have been an almighty enforced estrangement. The two don’t belong together anymore.

The only person regularly on television who still leavens pieces to camera with a namedrop of their other half is probably Brucie. Other than that, mum isn’t, but also is, most definitely the word.

Her indoors, the one who wears the trousers, the missus: AWOL. Kids, ditto. No references to little blighters or troublesome tykes. As for parents, as even for *parents-in-law*, well, forget it.

Now spool back 25 years or so.

Another edition of [cref 3895 BOB’S FULL HOUSE] is underway. Our host has emerged from behind the dais, scampered past the revolving stage bedecked with contestants, and is now dispensing a few preliminary words of welcome. 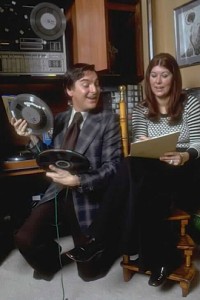 But there his story ends. We do not hear what he said to his wife, because the audience is roaring with laughter. A few are even applauding. By the time decorum has been restored, events have moved on. It’s time to meet the contestants.

Bob’s bit of blarney with his missus remains a mystery – like the one last week, and the one from the week before. Like they always are and always were.

For Mrs Monkhouse was, by and large, but a punctuation point in Bob’s patter.

Occasionally she gained more prominence, like in some of his monologues for An Audience With… and those video-only stand-up roustabouts as the Lakeside shopping centre.

Usually, though, she remained an ever-present post-punchline sorbet to ease Bob’s palate into his next bit of business.

But nowadays the television personality must now appear utterly devoid of the trappings of everyday domesticity. Nice family men and women, relaxed about even the smallest acknowledgement of an existence outside the crystal bucket, appear to have been hounded from the screen.

Or maybe it’s something else. Maybe it’s not the kin but the stars.

To wit, there aren’t any. The presenters, the anchors, the frontmen and women: they’re not different enough from us for jokes about how similar they are to us. 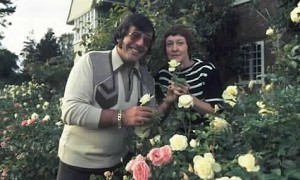 As such there’s no longer any novelty in hearing a tall tale about how you bought your mother a freshly-cut steak. Or how your wife is great in bed – only trouble being they’re *flower beds*.

The great and the good have been so diminished in number, and in stature, that there’s no point them trying to spin jarringly humdrum yarns in the name of entertainment. They themselves have become humdrum.

A few partially-ribald gags during Strictly Come Dancing about Wilmena’s cooking are all the nation has left.

Once Brucie retires, that’s it.

But never mind that. Did we mention about our mother-in-law? She’s so fat, that when she lies around the house, she lies *around* the house…