Of course, unless you’re living in a sitcom or an issue of The Daily Mail, none of those things will be on television at Christmas, nor have they been for several years.

Yet there are still some familiar sightings in the festive TV schedules, albeit rather less celebrated.

Surely the first sign of Christmas these days are the hopeless made-up tabloid TV guides at the end of November, which try and suggest THE AVIATOR or DEAD AGAIN will be shown on prime time Christmas night. Yet despite at least half of the listings being devoted to “To Be Announced”, it’s actually fairly easy to predict the sort of things that are going to be on Christmas telly before you even open the Radio Times. For example, you’ll always see…

A BBC2 staple, this, as whenever the Open University used to go on holiday, the extra hours would invariably be filled with a couple of RKO Radio Pictures like THE GAY FALCON, or umpteen LAUREL AND HARDY films back-to-back. In addition, whichever film star was having a season of their movies being shown on BBC2 over the festive period – normally either James Stewart or John Wayne – would invariably find their least distinguished pictures rolled out over breakfast so they can spend primetime showing the big guns while still announcing that the season was “definitive”. Of course, the thinking behind this was presumably to counter the cartoons being screened on every other channel until mid-morning, so for a generation the likes of THAT’S ENTERTAINMENT PART II served the same sort of role as ZIGGY’S GIFT and A MERRY MIRTHWORM CHRISTMAS.

2) BRITISH COMEDY FILMS AT 1AM 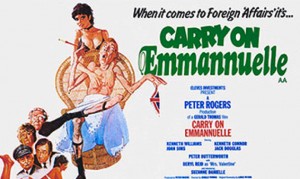 It’s late on Christmas Day. Everyone else has gone to bed and you’re searching under the sofa to try and find that missing plate for the last dishwasher load. You idly switch on the telly for some distraction and find STEPTOE AND SON RIDE AGAIN. Or PORRIDGE or THE LIKELY LADS or, hell, even FATHER DEAR FATHER. For some reason BBC1 always took the Christmas holidays as the cue to fling on sitcom spin-offs around midnight, presumably as these are really the sort of films that can only really be watched after strong liqour – especially when they were really at the bottom of the barrel and had got on to HERE WE GO ROUND THE MULBERRY BUSH or PERCY’S PROGRESS. Indeed, DON’T JUST LIE THERE SAY SOMETHING has probably been on Christmas telly more times than THE SNOWMAN.

“Why is the Ooh Aah bird so called?” Congratulations to useless Lib Dem broadcasting spokesman Don Foster who, while the world tries to claw its way out of recession and millions are facing unemployment, has once again decided the most important issue affecting the medium is too many repeats of DAD’S ARMY. Nobody cares, though, because what better way to while away a dull afternoon over the holidays than reciting the script to THE GOOD LIFE along with Richard Briers. Indeed, such is the enduring appeal of some of these shows that in 1984, a repeat of PORRIDGE on December 27th was not just the most popular programme on BBC1 that night, but also the entire festive season with a whopping 19.4 million viewers. That’s more than RAIDERS OF THE LOST ARK!

“Hello? Yes, yes BBC, I know.” So BBC2 have got two weeks worth of daytimes to fill without schools programmes and Westminster. Call for Michael Palin, who can happily go AROUND THE WORLD IN EIGHTY DAYS for the hundredth time every morning at 10am, or Alan Whicker, who can remark, “There’s something about a speedboat that makes you want to laugh” yet again. That said, as they’re on every single day of the holidays, we’re not sure who leaves their New Year’s Eve parties early so they can find out whether Mike’s going to be let into Saudi Arabia the next morning.

5) A HASTILY-COMMISSIONED CHRISTMAS SPECIAL OF A FLOP SERIES

TV scheduling is often more luck than judgement. Take 1980, for example, when BBC1 commissioned NICE WORK, a factory-set sitcom starring Edward Woodward. It all seemed very promising so, at the same time, they greenlit a Christmas special, assuming that by December the public would be chomping at the bit to see how the by-then-much-loved staff of Hoffman Pressburger would celebrate the festive season. However by the time Mr Woowar joined the likes of Terry Scott and Robert Lindsay in the Christmas Radio Times to suggest how his character would celebrate Christmas, the series had been broadcast, and promptly flopped, meaning the special was its last ever outing. In later years, the likes of BABES IN THE WOOD and JACK DEE’S SATURDAY NIGHT enjoyed some ill-advised festive outings, while so desperate were the Beeb to replicate that Only Fools magic, THE GREEN GREEN GRASS went out at 8pm on Christmas Day 2005.

6) A CHRISTMAS SPECIAL IN AN EMBARRASSINGLY UNPRESTIGIOUS SLOT 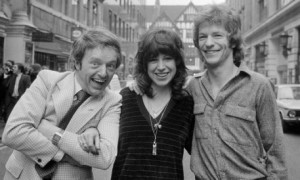 There are only so many hours in Christmas Day, so not every series can get their festive special in the favoured slot. Yet there’s something a bit embarrassing about a show trying to get us in the festive mood when, thanks to several more enticing shows taking priority, they’re doing so on December 19th when everyone’s still in work. For a time, the position of a show in the Christmas line-up could tell you exactly at what point an entertainer’s career was at. The best example is THE PAUL DANIELS MAGIC CHRISTMAS SHOW, which, when our man was still a rookie magician, started its life in 1979 on December 22nd. In the early 80s he was at his peak and regularly turning up on Christmas Day, but by the end of the decade, when the novelty started wearing off somewhat, he flitted around Christmas Eve or Boxing Day. Finally, in the 90s, Paul was reduced to manning the Bunco Booth on the 29th or 30th when everyone’s bored of Christmas, and nobody was surprised when the show soon came to an end. Meanwhile, 1988 was a blue Christmas in the Forsyth and Corbett households when Marcus Mortimer, producer of their seasonal special BRUCE AND RONNIE, walked into the rehearsal rooms in tears and blubbed, “I don’t know how to tell you this, but I’ve just looked at the schedules and we’re on Boxing Day at eleven o’clock”.

7) LEFTOVER EPISODES OF FLOPS GETTING FLUNG OUT DURING THE DAY

Every year the shelves at the Beeb and ITV are groaning with hundreds of episodes of series that have never seen the light of day thanks to series getting canned mid-run, so the broadcasters have regularly flung the previously unseen shows out during Christmas daytimes, justifying the expense of making them while hoping nobody notices. And if the makers complain, at least they have the prestige of going out at Christmas. The likes of dodgy Davina-helmed hidden camera show OBLIVIOUS and silent comedy THE BALDY MAN have been shoved out in this manner in recent years. Occasionally you’d also get leftover episodes of game shows that had been postponed during their runs, with the surprisingly unfestive edition of EVERY SECOND COUNTS screened at lunchtime on Christmas Day 1986 being the episode that had made way for One of Our Dinosaurs Is Missing after The Late Late Breakfast Show had been cancelled and the Saturday schedules abruptly rearranged.

8) SOMETHING ON BBC2 OR CHANNEL 4 GETTING NO VIEWERS

For 51 weeks of the year, Channel 4 is the channel of Big Brother, Come Dine With Me and Property Ladder, often being more populist than ITV. However come Christmas, with BBC1 shoving out all the big guns, C4 seems to revert to its early days with schedules filled with the sort of “alternative” – ie, utterly tedious – programming that it’s too scared to show at times when anyone’s watching. Hence you get opera, ballet and extended religious documentaries, and at least one of these will be scheduled on Christmas Day opposite EastEnders or Doctor Who and get a rating so low it’s officially rounded down to zero. In 1993, for example, C4 screened SWAN SONG, a low-budget, one act play starring John Gielgud and directed by Kenneth Branagh, no doubt delighting the handful who bothered to tune in. BBC2 couldn’t crow too much, though, as the same night they played Alan Plater’s dramatisation of Glyn Thomas’s (who?) autobiography, SELECTED EXITS, and nobody watched that either.

9) A SPRIG OF HOLLY ON THE TELEPRINTER 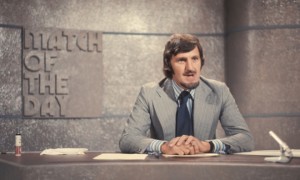 In every paper over the Christmas period you’ll find some columnists wringing their hands over the number of matches footballers are forced to play over the festive season, but the three or four full fixture lists over the festive season are always great fun, especially because the players are usually a bit knackered towards the end and there’s all sorts of bizarre results. However such were the restrictions on televising football in the past you’d only get MATCH OF THE DAY on Boxing Day if it fell on a Saturday – if that. Indeed it wasn’t until 1999 that you’d always get a highlights show on the 26th. To make up for it they were normally allowed to show a couple of goals on FINAL SCORE, where Harry Gration, Ralph Dellor or David Icke would sit in front of a Christmas tree to have a look at the teleprinter, with a sprig of holly replacing the usual score draw ticker as the pools didn’t operate on Boxing Day, before running through the results and tables as briefly as possible and buggering off. Still, it was more interesting than Setanta Sports News.

10) SOMETHING SHITTY ON NEW YEAR’S EVE

Television on New Year’s Eve is the equivalent of Tesco at 5pm on Christmas Eve – all the good stuff’s been and gone and if you can’t find anything it’s your own fault. Seemingly the broadcasters have decided en masse that everyone goes out on December 31st and there’s no point in showing anything half decent, so out comes all the rubbish they can’t get away with screening when people are watching. For ITV, this is normally a crappy drama that’s been on the shelf for ages, like 1996’s in-jokey media satire CUTS or 2007’s DOUBLE TAKE, while on the Beeb it’s endless repeats, like PARTY AT THE PALACE all over again in 2002. Surely the biggest pisstake was on the last day of 1994 when BBC1 presented the incredible double bill of STOP OR MY MOM WILL SHOOT and BARBRA STREISAND IN CONCERT, but anyone on their own in 2004 will doubtless still recall the heightened despair caused by the screening of A QUESTION OF SPORT OUT-TAKES SPECIAL at 11pm.