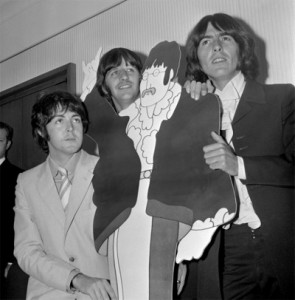 Another bank holiday almost completely devoid of specially-prepared and singularly-special telly got TV Cream to thinking: whatever happened to the theme night?

Not your couple of repeats, two-to-three hour affairs. No, we’re talking about your massive fuck-off extravaganzas that begun at 5 or 6pm and went right through to the early hours of the morning.

You know the ones we mean: TV Hell, Weather Night, Lime Grove Night, Birth Night, One Day In The 60s…

It’s perverse that these no longer exist. For starters, given the fact TV archives are exponentially growing, there will always be more stuff, and hence new stuff, to use for theme nights.

It would be a way of giving BBC2 more of a must-see, quirky feel once again, instead of its current non-existent dumping ground-esque personality.

Digital channels, with their half-hearted attempts at theme nights (ooh look, two repeats plus a new interview with Mark Lawson on BBC4!), should stick to stand-alone programmes and leave their elder brother to do things properly.

For instance, instead of last Monday’s rubbish line-up of, among other things, A Garden In Snowdonia, Future of Food, Hardcore Profits and Kill Bill – none of which belong on a bank holiday – BBC2 should have, and could have, given the entire evening over to a parade of things about, say, 1989, or the moon landings, or the great British holiday, or trains, or time, or spies, or vaudeville, or the English language, or…the Beatles.

Yup, instead of tonight’s semi-theme night (there’s even a repeat of Dad’s Army, for god’s sake) BBC2 should have gone for the full works and handed over eight, even nine hours to the Fabs.

5.30pm BEATLES NIGHT
A celebration of the greatest band in the history of popular music, starting with In My Life: the first of tonight’s five-minute reminiscences from people who witnessed the Beatles first hand, beginning with Michael Aspel.

5.40 The Beatles at the Beeb
A compilation of the group’s many appearances on BBC programmes, both together and alone, including Juke Box Jury, Not Only But Also, Monty Python’s Flying Circus and Rutland Weekend Television.

8.00 The George Martin Tapes
The Beatles’ producer discusses working with the group, plays some rare archive material and talks through the evolution of some of the band’s most famous songs.

8.45 Come Together
A documentary investigating the relationship of the Beatles after 1970, including the various attempts from members of the group and others to engineer a reformation, plus the many collaborations between ex-Beatles and their associates.

10.15 Apple: Rotten to the Core
Documentary exploring the rise and fall of the Beatles’ late 60s business empire.

11.10 10 Songs that Changed the World
Paul Gambuccini picks 10 Beatles tracks that reshaped popular music, tells the history of their creation and considers their legacy.

12.15 The Songs we were Singing
Paul McCartney in conversation with Clive James.