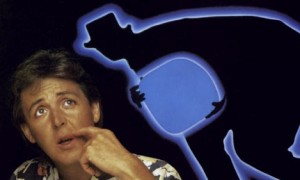 Is there another round of Macca reissues and repackagings in the pipeline?

Has Yoko Lennon launched another lawsuit, claiming that the bit in Coming Up where Paul sounds like he’s doing an impression of Yogi Bear is a pisstake of an avant-garde sound installation from 1968? (and if it is – nice one Paul!)

What with one thing and another, almost all of Paul McCartney’s stuff has been pulled from iTunes and Spotify.

The latter means that TV Cream’s Macca Mystery Tour playlist now contains just Cilla mangling her way through Step Inside Love and Paul doing his George Formby version of Something at that tribute concert for George Harrison. Oh dear.

So here instead is an alternative playlist comprising the very best covers of Paul’s solo work. We have to confess, albeit churlishly, that some of these are better than the originals…

2. MULL OF KINTYRE by Glen Campbell
A key change, a few nifty rewrites and some harmonies make this way better than Macca’s version. Glen plays the bagpipes himself. There’s even a proper ending.

3. SILLY LOVE SONGS by Denny Laine
Traitor! Former Wing, Denny (now Dennis) Laine, tries to walk in his former employer’s vegetarian shoes. He ditches the original’s best bits – bubbly bassline and chirpy vocals – and replaces them with a clunking rhythm and defiantly hoarse bellowing. He even does an impression of Linda at 3:30!  Silly, very silly.

4. MAYBE I’M AMAZED by Sandie Shaw
Whoops, it’s in French! Mais oui, this works very well, with the chorus sounding even more manic when in a foreign language. As a bonus, de temps en temps there’s a choir of filles trilling merrily in the background.

5. BAND ON THE RUN by Twinkle Twinkle Little Rock Star
Having trouble getting a little one off to sleep at night? Perhaps you’re wrestling with a dose of insomnia yourself. The prescription: repeated listenings to this charming lullaby version of Macca’s tale of a sordid jailbreak and criminal manhunt.  From an album containing similarly plaintive renditions of Jet, My Love and Listen To What The Man Said.

6. PIPES OF PEACE by the Brighouse and Rastrick Band
The full brass band and percussion treatment. As you’d expect, this is heavy on the military stuff (oom-pah bass drum, crackling snare drum), light on the schmaltz and absolutely nowhere when it comes to that electronic noodling in the middle bit.

7. EBONY AND IVORY by Vincent Malone
A French trumpeter person swings gallantly, attempts to sing the tune, uses a bit of Franglais, does some more talking, then gets his mates in the studio to warble the rest while he chats about how he “sees ivory” while out for a walk. C’est parfait.

8. NO MORE LONELY NIGHTS The Best of Top of the Pops 1984
You can find more or less every one of Paul’s hits on a TOTP album, but this stands out by virtue of the singer sounding even less like Macca than you’d expect, someone cocking up the first guitar solo, someone cocking up the second guitar solo, and a bit of vocal adlibbery at the end of which James P. McCartney would be proud.