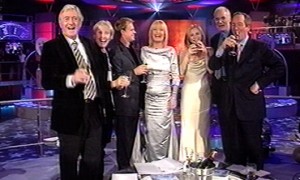 Over the next few weeks we’ll be filling our time capsule with stuff that the noughties deserves to be remembered for.

Shows that risk being washed away by the tide of history that says the decade was all about Peter Kay’s Max and Paddy’s Road To Nowhere by Peter Kay, Russell T Davies’s Dr Who, and Simon Cowell’s ITV.

Who, after all, can forget that they’ve remembered to forget programmes like ‘Orrible, Hear’say It’s Saturday, Stars Reunited or Celebdaq? How about This Is Dom Joly, or The Chair, or The Lookalike Awards?

We’ll hopefully be chucking a few big hitters inside as well: Fame Academy (“Oi!”), Election 64 (“Too busy thinking about the Beatles”), The Premiership (“He has to drive it!”) and so on.

We asked for your suggestions – and there’s time for you to send in some more.

But don’t worry if your fear for TV Cream’s sensibilities. We still know where our uncritical heart beats; we’re not about to be turned by a flash of Julia Bradbury’s ankle or George Lamb interviewing the proprietors of Sorbet and Seasons. In a month or so’s time, the capsule will be closed, carefully sealed, and buried safely out of sight – as a link somewhere in TV Cream’s unintuitive site navigation.

Here’s what has been placed inside so far…