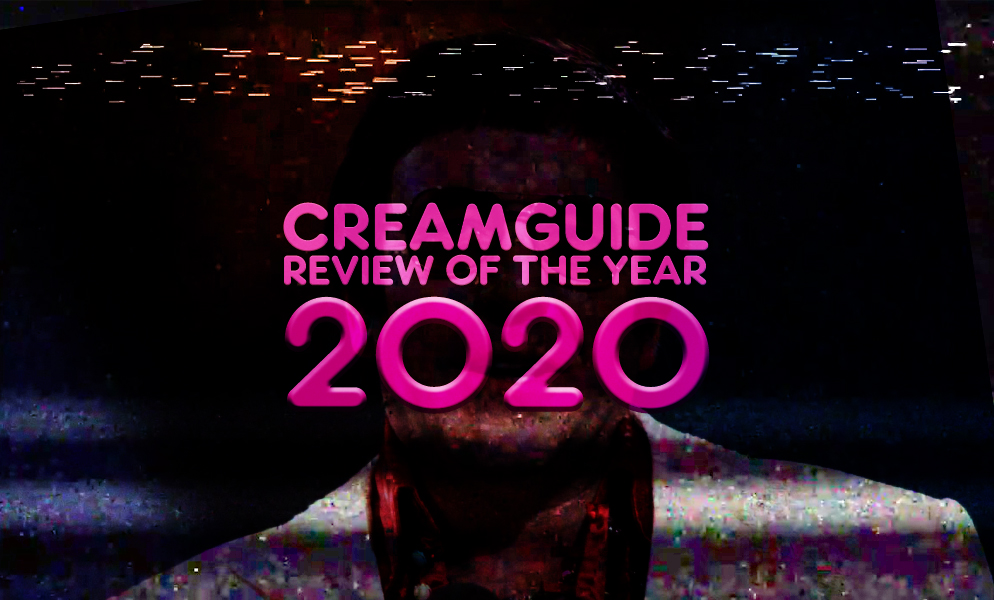 Well, here we are on New Year’s Eve, and remember all the excitement when we saw the back of 2016, eh? In case you missed it, this year has been bloody awful, but we hope Creamguide has been a Biddy Baxter-style rock in your lives, as beloved a part of Thursday as the Clap For Carers was. So let’s finally boot the corpse of this year out of our sight, as we ask…

Yes. Yes it was. As we started JANUARY we wondered if we were going to get a stranger programme than the five-minute, one-story BBC1 news bulletin on New Year’s Day, but we didn’t know the half of it. Doctor Who was back, with a new series at the start of the year for the first time since 1985, which was probably the most consistently inconsistent for a long time, with a cracking opening double bill followed by Orphan 55, the worst episode since it came back. Much more consistently entertaining was the return of Crackerjack, the combined entertainment forces of Sam and Mark, Ian Kirkby and Steve Ryde producing a show that was much better than the original, as that never included a long sequence where they all danced to the theme tune of Wheel of Fortune. Top of the Pops moved into 1989 and a frantic new format where they seemed to be trying to play the entire Top 40 in half an hour, while Creamguide celebrated twenty years! Hooray for us.

FEBRUARY saw a great example of how Tom Baker used to say the living are now mostly entertained by the dead, with an evening of shows on BBC2 starring Derek Fowlds and Clive James, just after we’d said goodbye to Nicholas Parsons and Terry Jones as well. Talking Pictures started repeating every existing episode of Sunday Night at the London Palladium, of which the most fascinating from our perspective were the few colour episodes from the long-forgotten 1973-74 revival, where one was restored from the raw footage of a wiped episode, and another was half an episode abandoned due to a bomb scare. And then…

So here’s the big question, when in MARCH did you realise this was a big deal? For us it probably was when Dan and Louise started sitting further apart on Breakfast, but Friday 13th surely has the best chance of being Day Zero in the films, not just because of the symbolism but because that was when all the football was cancelled. Before that we’d all be stunned by the shocking revelation in Doctor Who that the Doctor we thought was a mysterious alien from space was in fact, er, a slightly different mysterious alien from space. Distracting us from impending doom after that was the news that the Ready Steady Go archives had been prised out of Dave Clark’s hands and so BBC4 were able to do an evening of clips that weren’t just of The Dave Clark Five.

And so to APRIL where we ended up getting more television from Gary Lineker and Steph McGovern’s houses than we did most television studios. In a bizarre month of Threads-style emergency broadcasting we should pay tribute to Blue Peter for still going strong and BBC Sport producing more output in a weekend with no sport at all than they did most weekends when fixtures were being played, with a host of nostalgia shows. Sadly Eddie Large was the first of a number of beloved entertainers who fell foul of the virus, while kudos goes to Geoff Lloyd who found himself planning to host a fairly light-hearted show on 5 Live but instead ended up anchoring their coverage of the Prime Minister going into intensive care with about two minutes’ notice, an experience he likened to receiving instructions in how to land a plane, making him very much the modern day Roger Finn (especially as he did it again on Christmas Eve with the Breixt deal). As everyone stayed in there were bumper ratings for various shows including Quiz, a drama that included actors playing David Liddiment and Claudia Rosencrantz.

By the time we got to MAY we were getting a host of virtual versions of some staples. The virtual VE Day on the Beeb was nice, with veterans getting surprise video calls from David Dimbleby, but the virtual Eurovision was bloody awful, getting the tone all wrong from the moment they announced “our original venue is now an emergency hospital” and depressing the entire continent with two hours of several dozen acts all saying “it’s bad, I guess?”. There was certainly no need to rush back with new programmes if the alternative was football repeats and elections, BBC Parliament wheeling out all the classics on Saturday afternoons and ITV repeating the whole of Euro 96, although while they brought us the Big Long List Of Credits, unfortunately we never did get to see the promised feature on England vs Scotland being played, ooh, on the internet.

By JUNE the channels were eking out whatever content they had left and Alan Carr’s Epic Gameshow made for a fun distraction on Saturday evenings, where surprisingly Take Your Pick turned out to be the most successful revival while Strike It Lucky was pretty ropey, but did at least reveal the previously unheard middle eight of the theme tune. Also on a gameshow tip, Bradley Walsh’s sixtieth birthday saw clips of Only Joking and Midas Touch on primetime ITV for the first time in 25 years. And we finally got the return of proper telly shows filmed in proper studios, although seemingly the first show back was the underwhelming Peter Crouch: Save Our Summer, the Number 73 revival we didn’t know we needed.

JULY was the first month since 1985 that there wasn’t a new episode of ‘stEnders on the Beeb, but some suitably momentous repeats managed to fill the gap before the start of, ho ho, Series 2. Emmerdale and Corrie managed to continue without a break thanks to rationing that saw the latter celebrate VE Day in mid-July and then everyone wearing hats to cover up lockdown haircuts and standing miles apart overnight. ITV also showed Dr No on a Saturday night, which at 58 years old must be the oldest thing ever broadcast on primetime ITV. BBC4 finally finished 1989 on Pops, the first year we were able to see every single episode, including the Review of the 80s where Gambo and Read introduced such pivotal eighties acts as, er, David Essex.

AUGUST saw the nation get up at nine o’clock sharp on weekend mornings to witness the delights of Runaround on Talking Pictures TV, quite the most demented thing this or any channel has broadcast all year and a run that was extended due to genuine popular demand. Brilliant to see Daisy and Diver come back a few years later, though not Mick, who was a bit mutton. It made up for the lack of Pops, which inevitably led to endless theories about it being delayed as “it couldn’t be signed off” and “the producers are furloughed”. Some of these people have some bloody funny ideas about television. There was plenty of pop on a Friday though with Radio 2’s Sounds of the 80s and now Sounds of the 90s, though while the latter does sometimes come up with the goods, Fearne Cotton’s a bit of an acquired taste and the amount of stuff they play from outside the decade with the flimsiest excuse (it was in a film, it was in the US chart, it was re-released, someone sang it in the shower) is ridiculous. Worth it for Fearne’s Peter Kay-style remembering things spot about things like going to the post office, mind.

Harry Hill was back on our screens in SEPTEMBER, and back on the Beeb for the first time in a quarter of a century, and for its clips of On The House and Farmhouse Kitchen, his World of TV was top stuff (“we’re not showing many clips of Bake Off, cos there’s still a bit of bad blood!”). The new series of All Creatures Great and Small was a big hit, but led to a tedious tabloid suggestion it was “rejected” by the Beeb which will now be repeated non-stop for the next decade or so, regardless of whether it’s true or not. ‘stEnders was back, but in awkward 25 minute episodes which meant several months of things on BBC1 starting at five to and 35 minutes past the hour, which is always a bit of a novelty. Blue Peter also received its second new presenter of the year, the show being a bit overmanned these days but seemingly it’s only a part-time job now, so the more the merrier.

In OCTOBER, Pops finally returned to BBC4 with 1990 and we could all enjoy the delights of the Cypher graphics which are probably the most exciting parts of some of these episodes. They’ll be back soon, don’t worry. Friday night was very much music night as the newly free Sky Arts showed Guy Garvey From The Vaults, which had some interesting clippage, but let’s never have complaints about captions on TOTP2 and similar shows in the future if the alternative is Garvey reading facts out during the songs. Spitting Image was back on Britbox and also with a US Election Special on ITV, which contained a grand total of one sketch featuring Joe Biden. Obviously they concentrated all their energies on those ten million sketches about Elon Musk.

NOVEMBER saw a fascinating repeat run of Play For Today and pretty much every channel on television making documentaries to mark the 25th anniversary of Diana on Panorama. Other than that it was plenty of quizzes, seemingly the easiest programmes to make in the current climate, including umpteen episodes of The Hit List, which we enjoy as we always like a pop quiz and has seen its ratings rocket in the cushy pre-Strictly slot. Not sure about well-known people appearing on Only Connect as members of the public, mind, especially when it’s that well-known person. If it wasn’t quizzes it was clip shows, Michael Palin’s memories of his adventures going down well, but BBC2’s The Noughties perhaps less so, given the last episode was flung out at midnight.

And so to the bleak DECEMBER, with the death of Des O’Connor casting a shadow over the start of the month. At least ITV had plenty of Corrie anniversary shows to keep morale high, including fascinating repeats of episodes from 1970 and 1980 on ITV3. Indeed it was a very archive-heavy Christmas, heralded by BBC4’s bizarre Thatcher night which included a repeat of BBC Choice’s Great Speeches from twenty years ago. And then there was Christmas, for many like the BBC in 1974, “greatly amended for economic reasons”, though unlike 1978 everyone’s still broadcasting and we’re not getting anything like the Beeb merging all their stations into one. Well, not yet, anyway. Happy new year!