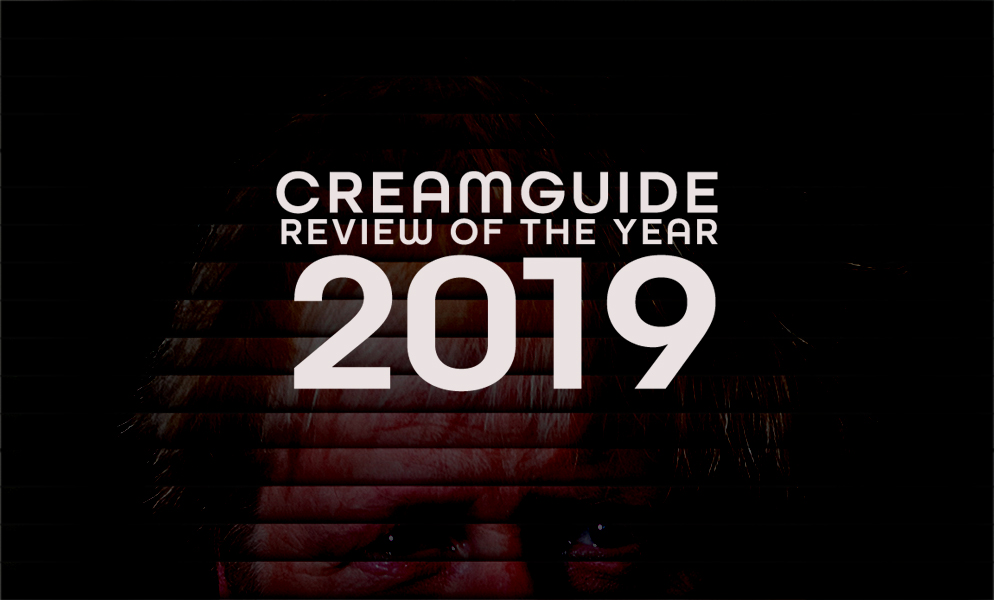 JANUARY started with Creamguide’s dad having spent all of the holiday period watching Danger UXB on Talking Pictures TV, including Christmas Day and New Year’s Eve, but it’s still not had a second spin so he can catch the episode he missed. Nevertheless it kicked off another demented year on that channel with all manner of obscurities from the Southern and Thames archives getting an outing, including Robin’s Nest at teatime shorn of the casual racism and a whole episode of Going A Bundle with Harry Fowler going behind the scenes of the long-defunct London Daily News. Who knows why. The second new Radio 2 schedule in a year worked a bit better than the old one, though the documentaries shifting to weekends made midweek in Creamguide a bit barren. Meanwhile Emmerdale repeats began on ITV3 meaning you could spend your entire afternoon watching all three soaps when they were good, and thrill to such exciting plots as Amos getting a microwave.

FEBRUARY began with BBC4’s Friday Night Jukebox Live which was apparently a right shambles with phones repeatedly going down like a particularly haphazard episode of Saturday SuperStore. As Pops entered 1987 and the accompanying doc failed to mention The Roxy at all, someone promised to upload every episode to YouTube, until the second one got blocked. The Pop repeats also offered a pleasing reminder of the golden age of accountability when Janice invited us to send donations to the Zeebrugge Disaster Fund to them and “we promise we’ll pass them on”. For an extra 50p they’ll mind your car for you as well. TVC proved it wasn’t alone in pointless charts as the Radio Times compiled their list of the greatest ever radio shows, a not especially contemporary selection that got grumbles there weren’t any commercial radio shows in it, but other than Kenny Everett and Roger Scott we don’t know what would be included anyway.

Alan Partridge returned to the Beeb in MARCH for a fine series despite dickheads in the tabloids falling over themselves to proclaim it a flop, clearly just to put the boot into Coogan. Also new was the BBC Scotland channel, which seemed a bit of a mixed bag with budgets clearly being stretched to breaking point but a couple of top series like Rewind and interesting repeats like Tutti Frutti. Scala Radio began, poaching Mayo from the Beeb and attempting to be a bit less in awe of the music than its classical rivals, and got off to a cracking start by its first news bulletin being a repeat of one off Magic the week before. Meanwhile Comedy Central launched the fourth revival of Blockbusters in twenty years, which was probably the best one but totally ignored by everyone. Expect the next revival in about 2022.

In APRIL BBC4 had to “do a Crossroads” and show two episodes of Pops in the wrong order due to a technical fault. Conspiracy theorists would then have had a field day as Michael Jackson was number one and they didn’t show it but, of course, it was because I Just Can’t Stop Loving You didn’t have a video, and hence Spagna became default number one instead. And Pops vs Roxy was the first in a new series of BBC vs ITV in Creamguide which was supposed to be a bit of a filler while we thought of something else and we were still dragging it out in November. Radzi left Blue Peter and went out with great dignity with a lovely speech, after he’d eaten the world’s hottest chilli and sat on a giant whoopee cushion. BT Sport also did a fascinating doc about Merseyside football in the eighties and, along with their other docs about Man U being relegated and Palace in the early eighties, we would like to request a documentary about every club in the entire league, please.

MAY saw Creamguide move house and we still got this thing out without missing a week, because we’re so professional. Ignore all those times we’ve forgotten to bill things. One of the first things we watched in our new surroundings was BBC Parliament’s repeat of Election 79, now such a telly staple we can recite the news bulletin along with Richard Baker. Less familiar was the new Bargain Hunt with an iffy new format – with umpteen new rules and contrived shots of members of the crew saying how long to go – proving so unpopular the producers admitted it was a big flop and they were going to bring back the old one ASAP. At the end of the month we were thrilled that the Cup Final and Eurovision were on the same day, but sadly Watford couldn’t take Man City to the never-ending penalty shoot-out we were so desperate for. Maybe they’d already arranged their parties.

JUNE saw BBC2’s fascinating Thatcher doc (“Yes, who will be the Muffins Man of 1974?”) and inexplicable repeat run of I Love The Eighties in half hour chunks, even the one hosted by DLT, which even more bizarrely moved onto the nineties run which is still going now. Pops made it into 1988, a bit of a chore of a year for some with Simes so past it, it was almost a relief to get the kids’ presenters. Meanwhile the Greatest Kids TV Moments in the TVC-affiliated TV Years magazine got the nation talking including natter on BBC Breakfast. It’s what we’ve always dreamed of! The Beeb now expecting over-75s to pay for a TV licence inevitably led to a host of ill-thought-out invective, though we did enjoy one story based around the views of that broadcasting expert and noted thinker Christopher Biggins. Who better to speak for the entire nation?

Another tedious tabloid storm in JULY when ITV announced they won’t be using all-male writing teams on comedies anymore, receiving a predictable response despite the fact mixed-gender writing teams have been responsible for Fawlty Towers, The Young Ones and The Royle Family. Channel 5 were running a comedy clip show at the time which, much like everything else on this channel, went through about four names during its run, and we don’t know why they do it. BBC4, meanwhile, illustrated the price you pay for using pre-recorded announcers and pre-scheduled tweets when Wimbledon obliterated Pops and nobody was there to explain it, until the controller had to personally step in on Twitter to sort it out. In other fascinating repeat run news, BT Sport showed a “new” series of The Big Match Revisited from the odd season of 1974/75 when every team was consistently inconsistent, pitchside ads compelled us to “BE A POSTMAN” and Brian Moore commended Malcolm McDonald for arranging for “forty orphans” to watch him play, in a tone that suggested Supermac may have “arranged” for them to be orphans himself.

AUGUST saw Mastermind move from Salford to Belfast, and the loss of some of the more distracting gimmickry from recent years, and they still managed to entice up forty celebs for Christmas too, even if we haven’t a clue where the rest of the run is. The fantastic ITVonstrike on Twitter provided us with ten weeks of as-it-happened industrial action, while Pick of the Pops also recalled 1979 with an absolutely brilliant chart. Indeed it’s been ace every time they’ve featured that year, surely confirming it as the greatest year for pop ever. And the third Dad’s Army cast in three years made a decent job of remaking the lost episodes, with Kevin Eldon and perhaps surprisingly Mathew Horne getting all the plaudits.

And so to SEPTEMBER where Python celebrated fifty years with some interesting docs which, happily, didn’t feature Cleese banging on about Brexit or his divorce. Supermarket Sweep came back and everyone seemed to enjoy the first one as a novelty with Rylan proving a great host, but nobody seemed that bothered about watching an hour of it every night for a month, even when ITV2 then immediately repeated the whole series in the same slot. With Smitty out of the door we were assuming we’d now get an uninterrupted run of Pops but we then skipped two episodes in quick succession as they were live and hadn’t been recorded properly. Let’s hope they were a bit quicker with the play and record buttons in 1989.

OCTOBER saw the end of a long-running feature in Creamguide as we finally lost patience with Points of View and had to stop watching it, because it’s a bloody disgrace, allowing members of the public to hurl witless, ill-informed abuse at celebrities and programme makers, with no attempt made to correct obvious errors or give a right of reply, and to be honest, we’ve had enough of that kind of thing elsewhere at the moment. Appalling. Another grand old institution disappearing from view was Thomas Cook, though the shops seem to be living on and we like the one in Westfield Stratford which is plastered in Thomas Cook branding with “Hays Travel” written on a bit of paper in the window. And Pops finally got to the All About Eve incident, which rather overshadowed a top show with the amazing You Came by Kim Wilde. Such a great song.

In NOVEMBER, Catweazle arrived on Talking Pictures TV, the week before we remembered to bill it, of course. Maybe we’ll finally start including Forces TV in 2020 and miss out all of their best shows too. We know it’s been pretty much all Pops in this review but this month it became the second most-watched music show on TV in its new 9pm slot, although that probably says a bit more about the current state of music on TV than it does about Pops, really. Radio 2, meanwhile, were celebrating twenty years of UK garage, as old now as disco was then. Brrr.

And so to DECEMBER with an election which saw the triumphant return of Arthur and a pretty unconvincing virtual set, but whatever your reading of the results we are actually quite relieved there seemingly won’t be another one for a while. C4 are probably relieved there won’t be another Alternative Election Night, as it completely died on its arse. Clive James perhaps wisely checked out before polling day, though we were pleased he’d had the opportunity to read all his obits and receive all the plaudits before he went. And then there was Christmas, which was alright, wasn’t it? Apart from Neil Innes dying and a creeping sense of gloom about 2020. At least there’s twenty years of Creamguide to celebrate, if we make it that far. It’s in late January.