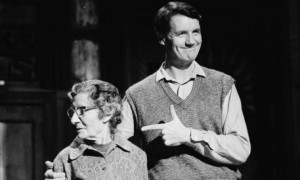 Yes, yes it could. Great as the latest volume of Michael Palin’s diaries are, and they are very very great, he doesn’t include quite all of his most important work of the 1980s.

Excised presumably due to space, these entries cover a few of Mike’s cameos and promotional appearances, one of which even turns up in someone else’s diary.

TV Cream is proud to present some of these entries below, reproduced with the oleaginous permission of Luigi Vercotti Management, in association with The Bishop.

To Birmingham to appear as a special guest on the Chris Tarrant show OTT. It is a late night revue format, not a million miles away from Footlights, though you’d never catch any of its stars admitting as much. It has received a bashing from the press, but the bits I have seen have struck me as rather good fun, if bawdy. I arrive and meet Tarrant. He is an immensely gregarious man, full of zest and ideas. I have a number of slots on the programme, including, somewhat worryingly, the opening. The rehearsal is a complete shambles, and succeeds in leaving me more, not less, confused about the live show. I have a quick chat with Lenny Henry: a great comic and hugely complementary about Python. The show itself passes by in a blur of nearly-missed cues, costume changes, light swearing and pairs of large breasts. My bits – a spoof weather report, a spoof party political broadcast, a spoof charity appeal and a spoof cookery corner – are the sort of thing I was doing 15 years ago, but are painless enough and seem to go down well. At the end a flushed Tarrant boomed “I could do with a long hot shower” and I knew what he meant.

A car arrives to take me to the BBC Television Theatre in Shepherd’s Bush for the Wogan show. On the way the driver informs me that Terry is on holiday and “that poof Kenny Williams” is standing in as presenter. I find myself feeling a little unsettled, and am not sure if it is the thought of being interviewed on a chat show by someone who is neither a chat show host nor interviewer, or the unreconstructed views of the cabbie. On arrival, I am shown into the green room where I find a bubbly Barbara Windsor looking more than ever like a fruit cocktail, and a dapper Stephen Fry, with whom I discuss undergraduate humour and East Anglia. I see little of our host, save for a hasty “Hello duckies…don’t touch the food, it’s a disgrace!” bawled round the door. I am on last. The slot begins awkwardly, and I have to endure a tense few moments when it becomes clear Williams doesn’t really know who I am. Fortunately the Limericks book supplies plenty of material and in the course of proceedings I discover Williams has seen my train journey, which surprises me as I’d heard he doesn’t actually own a television set. There is more confusion at the end when mein host wraps things up too soon and I have to dip into the book for what feels like the twentieth time. It’s all been rather hairy, and I am glad to get away. Later I have a cool response from the family. Helen thought I appeared shifty, and the boys declared that the flower in my jacket buttonhole meant I “looked like a ponce”. As I go to bed a steady rain is falling outside, and I wonder if the whole thing had been at all worthwhile.

To the Isle of Dogs, where I am be filmed riding on the newly-opened Docklands Light Railway while being interviewed by Chris Serle for the BBC’s Windmill programme. The railway is a fantastic achievement and deserves all the praise that has been all-too-sparingly heaped upon it. The carriages glide almost silently along tiny tracks that are balanced high above the renovated docklands. We sit at the front of the train: an eerie sensation, for there is no driver. The effect is startling and completely transforms your perception of train travel. I shared some of these thoughts with Chris while the camera turned, before moving on to a bit of easy chat about Python. Chris is the most consummate of interviewers. I felt completely at ease, and was rather sorry when the ride, and the filming, came to an end. Ironically, now that Broad Street station is no more, it look me longer to get back home from the Isle of Dogs than it would have done before the DLR existed.

After a quiet morning I have to embark on more 80 Days preparation filming, this time inside my own house. I am to be shot working at my desk and answering a telephone call, purportedly from the BBC asking me if I would be willing to go around the world in 80 days. Despite the clumsy conceit I am rather taken by its simplicity, and enjoy pretending to remonstrate with somebody who isn’t there about the notion of circumnavigation. Afterwards I agree with Roger that only the most soulless of critics would find something objectionable about such an obvious yet harmless TV contextualising device. I then suggest that we do the entire journey in a similar vein: feigned phone calls, back projection, lots of studio work. He gives me a watery smile.