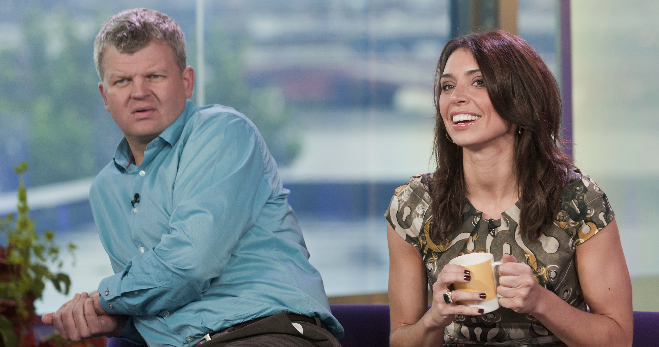 What was it Karl Marx said? History repeats itself, and each time is fucking worse than the last. Or something. Here are the things ITV has forgotten about – yet again – when it comes to running a successful and popular breakfast television service.

1) Faces are not more important than features

The biggest and simplest mistake of them all. People won’t – and never will – tune in just because “it’s Adrian and Christine from The One Show”. In the words of Walter Mondale to Gary Hart: where’s the beef?

A man and woman pretending to flirt first thing in the morning is ghastly. Fiona Armstrong and Michael Wilson couldn’t do it. Hell, even Frostie and Anna Ford couldn’t do it.

4) Nobody is bigger than the brand

5) Don’t piss about with the schedule

For heaven’s sake, run items when you say they are going to run. First thing in the morning is no time to be messing with transmission orders. The eight o’clock news HAS TO BE at eight o’clock. How hard can it be?

6) Don’t give your programme a meaningless title

Nobody has used the word “daybreak” in normal conversation since the end of National Service. GMTV was just as rubbish; since when have programme titles been acronyms? At least Good Morning Britain had a bit of flair to it, even if it was pompous. The Beeb have always got it right. Breakfast Time, Breakfast News, Breakfast: all unfussy and obvious.

7) Nothing should be longer than five minutes

There’s a time and a place for a debate on the legality of the Iraq War. Breakfast television is neither, no matter if your guest is the former prime minister.

9) Don’t go for the wrong kind of gimmick

The trick is to either go for a kind of anti-gimmick (Gyles Brandreth, Frank Bough in a cardigan, Chris Tarrant at seaside resorts) or turn the whole programme into a gimmick (The Big Breakfast in its early, funny incarnation). You don’t go for knock-offs from other formats, like a real fireplace (GMTV) or, in Daybreak’s case, people trying to set new world records, or giant rabbits, or visits from the Women’s Institute, or celebrity nail painting, or any other lousy crappy half-baked nonsense.

And we’re looking at you, Captain Bleakley.

12) All novelties must be harmless, not charmless

It’s the difference between Roland Rat or Russell Grant (harmless) and hiring a retired military man to shout the weather forecast or Linda Lusardi doing physical jerks (charmless). In Daybreak’s case, the latter means hiring Four Poofs and a Piano to do “topical” “songs” every Friday, or Bradley Walsh to “present” the weather forecast.

13) It’s not just about London

14) There must be self-evident reasons for change

There weren’t any when GMTV replaced TV-am, and there aren’t any now.

15) Don’t define yourself by what you are not

By positioning itself essentially as “not GMTV”, Daybreak has been all about negatives: it’s not this, it’s not that. Where are the positives? What – and who – is the show for?

16) And don’t aspire to be something you are not

This is breakfast television, not Des O’Connor Tonight. You’re not on primetime TV anymore, Adrian!

Protracted conversation with the likes of Howard Marks and Rhys Ifans at 8.10am is not what people want over their toast and cereal. This goes right back to that moment in 1983 when Greg Dyke switched on TV-am for the first time and saw Yehudi Menuhin talking about classical violin technique. “Who wants to watch Yehudi Menuhin at breakfast time?” he rightly concluded.

So stop trying to give senior politicians “a grilling”.

19) And it’s not fucking Parkinson

So stop getting the likes of Seal and Ben Affleck to sit by side on the sofa and listen to your self-promoting questions.

Turn that frown upside down, Chiles, you miserable bastard.