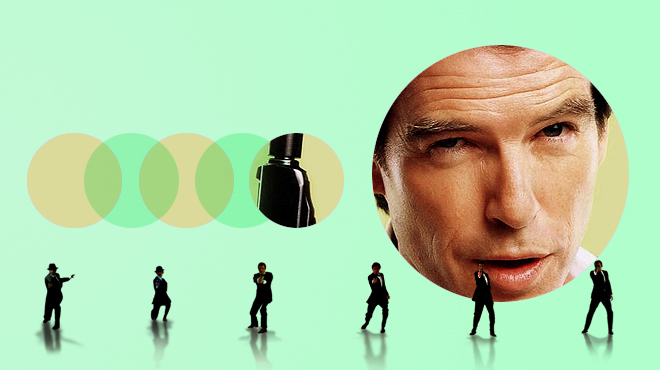 Poor Rosie (Gloria Hendry). She tries to act all headstrong and assertive in 007’s presence, only to nip into the bathroom and take umbrage at a bit of unnecessary tongue. “A snake, I forgot,” consoles Bond. “You should never go in there without a mongoose.” Thrown by such subtle wit, Rosie declares herself to be useless. “Well, I’m sure we’ll be able to lick you into shape,” contends Bond saucily – a line of dialogue, let the records state, improvised by Roger Moore. (Live and Let Die, 1973)

Sure, there’s epic Bond, of a car-rolling-through-the-air, skiing-down-a-bobsleigh-ride, fisticuffs-atop-the-Golden-Gate-bridge kind. But there’s also EPIC BOND, of a look-at-how-much-exoticism-we-can-cram-on-to-the-screen, here’s-the-biggest-studio-set-we’ve-ever-built kind. We know which sort we prefer. (The Spy Who Loved Me, 1977)

It’s the 1970s, which means you can’t just show up at an oil rig controlled by a diabolical mastermind in a bog-standard boat. You must instead flop out of an aeroplane while encased in an inflatable spiky cushion, which must then roll across the sea with you inside until you arrive at the oil rig just at the point where a party of guards is waiting, whereupon you unzip your inflatable sphere and proclaim: “Good morning gentlemen, the Acme pollution inspection. We’re cleaning up the world – we thought this was a suitable starting point!” (Diamonds Are Forever, 1971)

Pierce Brosnan’s first scene with Samantha Bond establishes a relationship between 007 and Moneypenny that easily surpasses anything Lois Maxwell or The Other One ever enjoyed. It is an exchange fizzing with mutual wit, easy repartee and glorious flirtation. “What would I ever do without you?” coos Bond. “As far as I can remember, James, you’ve never had me,” notes Moneypenny. “Hope springs eternal,” Bond sighs exaggeratedly. “This sort of behaviour could qualify as sexual harrassment,” Moneypenny continues. And what does that mean, Bond queries? “Some day you have to make good on your innuendos!” (Goldeneye, 1995)

Roger Moore essayed a celebrated sequence of eyebrow-ascending acknowledgements during his long tenure as 007, but the best was the first: a silent doff of the head to the pilot of an adjacent helicopter, who also happens to be an assassin, who also happens to be actress Caroline Munro – she of the “lovely lines”. Five minutes later Bond blows her up. Still, at least he was polite about it. (The Spy Who Loved Me, 1977)

Any sort of business that involves 007 out and about in London is a Good Thing. If there’s a handful of international landmarks involved, not to say a totemic slice of topical infrastructure plus a few precariously-balanced boxes of fruit, so much the better. (The World is Not Enough, 1999)

There’s only one thing that outranks the sight of Judi Dench looking knowing, and that’s the sight of Judi Dench looking knowing in the company of Geoffrey Palmer. Alas, their big screen rekindling of their small screen relationship was to last but one Bond film, but while it burned, it burned brightly. “Sometimes I think you don’t have the balls for this job,” Geoffrey rasps. “Perhaps,” counters Judi. “But the advantage is I don’t think with them all the time.” (Tomorrow Never Dies, 1997)

We said we weren’t going to mention John Barry in this countdown, but he seems to have sneaked in, albeit as a co-conspirator with director Lewis Gilbert. At the time, this sequence was the most exciting thing to have happened in any Bond film ever. If Connery seems to be channelling his attitude towards gentlemen of the press during his rooftop romp, at least he’s far enough away from the helicopter’s swooping camera and sufficiently drowned out by Barry’s booming brass for us to neither see or hear. Or care. (You Only Live Twice, 1967)

There’s a real warmth between Desmond Llewelyn and Pierce Brosnan that rivals – and possibly exceeds – the old man’s relentless sparring with Connery and patronising by Moore. Bond and Q never have more fun than they do here, teasing and sniggering their way around a carnival of contraptions. “They always did say the pen is mightier than the sword,” drawls 007 when Q presents him with a grenade-fitted Parker. “Thanks to me they were right,” Q responds, before demonstrating the pen’s capacity to blow up half a waxwork dummy. “Don’t say it!” begs Q. “The writing’s on the wall?” Bond wonders. “Along with the rest of him!” Q chuckles, delightfully. (Goldeneye, 1995)

…when we count down numbers 0020-0011 tomorrow and delve deeply into Egypt’s treasures.