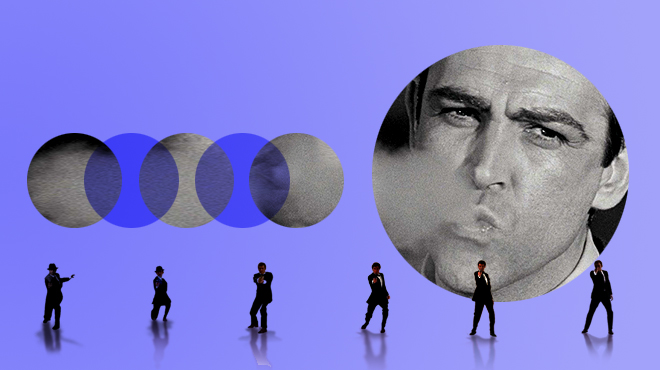 0010: Bond listens to a performance of a Bond theme

Great that they managed to get Linda McCartney to appear in person. (Live and Let Die, 1973)

008: A pigeon does a double-take in time to a Viennese polka while Bond drives through St Mark’s Square in a motorised gondola

“James!” exclaims the best Moneypenny of them all, as 007 walks into her office. “Have you brought me a souvenir from your trip? Chocolates? An engagement ring?” Bond sidles over to her desk. “I thought you might enjoy one of these,” he declares, producing what can only be described as a tumescent metal tube. “How romantic,” observes Moneypenny, suggestively. “I know EXACTLY where to put that.” She promptly throws the container into her waste paper basket. “The story of our relationship,” sighs Bond. “Close – but no cigar.”  (The World is Not Enough, 1999)

005: Bond considers a couple of points

While posing as a businessman in the office of petrochemical megalomaniac Mr Osato (Teru Shimada), 007 finds talk turning to matters anatomical. After his host cautions him on the dangers of smoking, his host’s assistant Helga (Karin Dor) decides to reinforce her support of this position by referencing her own reinforced position. “Mr Osata believes in a healthy chest,” she flexes. “Really,” digests Bond, pointedly. (You Only Live Twice, 1967)

003: The definition of safe sex

It’s wise of our hero to remain armed in what appears to be a Russian leisure centre. It’s even wiser of him when it turns out the facilities are being shared by Xenia Onatopp, the Esther Rantzen of the anarcho-erotic underworld. “You don’t need the gun, commander,” she purrs. “That depends on your definition of safe sex!” retorts Bond, conscious of her predilection for swapping a pout for a bout. Sure enough, much verbal and physical petting ensues, until 007 has had enough. “No, no, no!” he states triumphantly. “No more foreplay!” (Goldeneye, 1995)

It’s the scene that always got cut out of ITV’s bowdlerised daytime versions of Bond, and one that has helped get the entire film bumped up from a PG to a 12. Both of these decisions were and are as ludicrous as the sequence itself, which is the second most flippantly yet amusingly outrageous moment in the whole of the official 007 canon. There is nothing suggestive here; just silliness. Heavens, it’s pure Carry On Bond, with our man pretending to call someone a bitch before slipping a cassette down their pants then making a joke about bottoms. Loose Women is a thousand times more offensive. (Diamonds are Forever, 1971)

“Do you think there’s a danger of the bends?” wonders Sir Frederick Gray, as the capsule containing Bond and Amasova bobs its way casually into the ledgers of cinematic legend. As the 007 “family” cluster round for a peek, somewhere off camera, clearing their collective throats, are the James Bond all-male close harmony singers, waiting for Roger Moore to deliver one of the greatest innuendos of them all. And waiting in line next to them, there’s only bloody Carly Simon and the greatest Bond theme of them all…